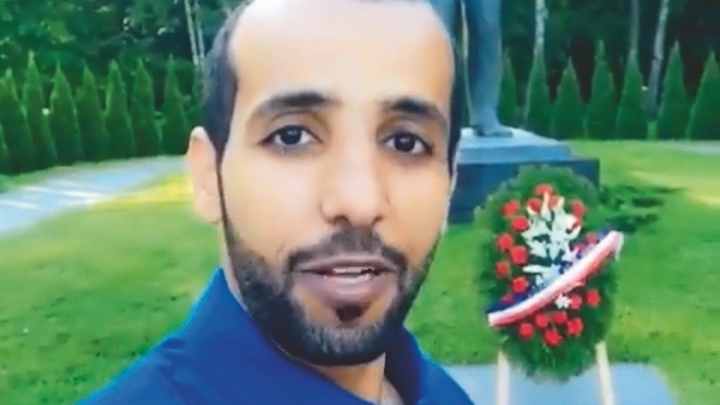 A Russian commander, Oleg Skripochka, and an American flight engineer, Jessica Meir, will be on board with Al Mansouri.

The UAE's first Emirati astronaut is undergoing final training sessions in Russia ahead of his historic mission to the International Space Station on September 25.

Last month, Hazza Al Mansouri was announced as the first Emirati who will be jetting off into space. He will also be the first Arab to reach the International Space Station (ISS). Al Mansouri will travel to the ISS on the Soyuz MS-15 mission, which will take off from Baikonur Cosmodrome in Kazakhstan.

"I am in Star city, Russia, where I am currently training with my team to prepare for our historic mission on September 25. In the training, we simulate the processes of taking off, reaching the destination and returning, and how to act in unusual situations or emergencies. Wish us luck," he said in an Instagram video posted last week.

A Russian commander, Oleg Skripochka, and an American flight engineer, Jessica Meir, will be on board with Al Mansouri.

The 34-year-old, who is a former military fighter pilot, will be carrying out several scientific experiments on the ISS, including winning experiments from selected UAE schools. The father of four will also be doing a tour of the ISS in Arabic and will be documenting his stay there on a daily basis.

He will be landing back in Kazakhstan during the first week of October onboard the Soyuz MS-12.

Al Mansouri's mission to the ISS is the start of many more to come as part of the UAE Astronaut Programme, officials from the Mohammed bin Rashid Space Centre (MBRSC) have said previously.

Even though this trip is for eight days, future ones will include longer stays on the ISS, so that Emirati astronauts can carry out more in-depth scientific experiments and studies to help improve human life on Earth.

The UAE-Russia ties are strengthening when it comes to joint work in space-related activities. The primary candidate, Al Mansouri, and his back-up Sultan Al Neyadi, received training from Roscosmos - Russia's space agency. Currently, Russia's Soyuz rocket is the only one that can send humans to the ISS.

"We hope that our collaboration with the UAE partners will evolve into a long-term and strategic one, especially taking into account the intentions and serious ambitions of the UAE in space exploration. We are ready to discuss building of satellites for various missions, launching of ready-made satellites and deployment of entire satellite constellations, the provision of remote sensing images of Earth which can be used in various areas of the UAE national economy," Loskutov said.