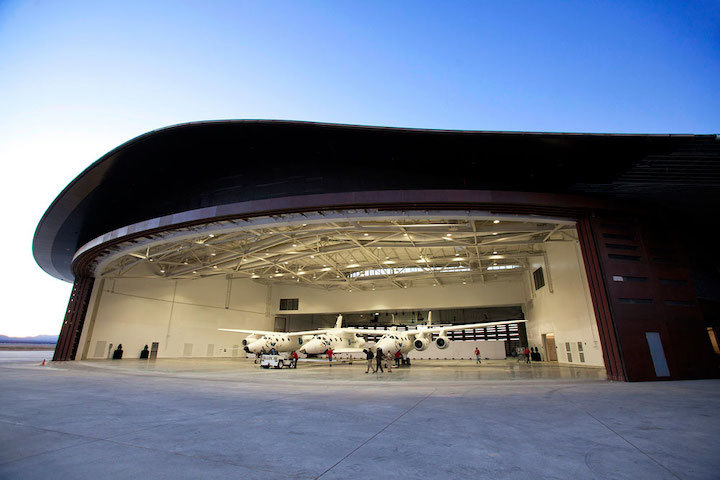 SANTA FE – Virgin Galactic is moving its spaceships and about 100 of its employees to Spaceport America this summer to prepare for launch of the world’s first space tourism operation.

“With today’s announcement, New Mexico is becoming the first place to regularly launch humans into space on flights conducted by a private company,” Branson told a crowd of media representatives, industry executives, space enthusiasts, and local and state officials.

Commercial launches with tourists on board could still be a ways off. But the company will now continue its flight test program in New Mexico at Spaceport America near Upham, about 50 miles north of Las Cruces.

The company has planned to establish its permanent operations there since 2005, when Branson struck a deal with then-Gov. Bill Richardson to become the anchor tenant for the future spaceport, which had yet to be built.

Over the years, the state has pumped more than $220 million into the facility, building a 12,000-foot horizontal runway for Virgin Galactic’s flights to space, a futuristic hangar and operations center for the company, and a vertical launch area for other firms.

About half a dozen commercial companies now operate at the spaceport, such as UP Aerospace, which regularly flies payloads into suborbit from the vertical launch area.

Others are testing new rockets and launch vehicles, including Boeing, Exos Aerospace, and a new tenant that arrived this week, SpinLaunch Inc. That company broke ground on a $7 million facility on Tuesday, where it will test a novel “space catapult” that, if successful, could immensely lower costs for launching satellites by literally flinging rockets into space.

He said Virgin Galactic is now ready to uphold its end of the 14-year-old bargain by moving operations here from the Mojave Air and Space Port in Southern California where it’s headquartered.

Virgin Galactic CEO George Whitesides said the company is ready, given its last two successful flights to space in December and February.

“We decided now is the right time,” Whitesides said. “Our most recent flight represented a huge step forward.”

Apart from the two pilots that fly the company’s spacecraft, a third passenger, Virgin Galactic Chief Flight Instructor Beth Moses, participated in the February flight to suborbit, marking the first time someone has flown to space in the cabin where paying passengers will sit on future flights.

Moses evaluated cabin dynamics during the test, something the company will now aggressively pursue going forward to prepare for commercial operations.

“We want to open up space to change the world for good,” said Moses, who showed a video of the February flight during Friday’s event in Santa Fe.

Virgin Galactic will bring its mothership, the VMS Eve, and the passenger spacecraft VSS Unity to the spaceport over the summer, once cabin interior and other work has been completed by The Spaceship Co., Virgin’s spacecraft manufacturing firm. The engineering firm will remain in southern California, where it’s now building two more passenger spaceships and another mothership.

Under Virgin Galactic’s system, the mothership carries the VSS Unity on its underbelly to about 45,000 feet. The Unity then separates from the VMS Eve and fires up its rockets to shoot into suborbit at 50 miles up.

The company will charge $250,000 per passenger, providing space tourists with a few minutes of gravity-free floating time in space and spectacular views of the Earth’s curvature. About 600 people have already prepaid to reserve seats on future flights.

The Spaceship Co. is also building a separate system to fly satellites into low-earth orbit. Like the space tourism operation, satellites will be launched from a spacecraft tethered to the belly of a mothership, in this case a modified Boeing 747-400.

Virgin Galactic has been establishing flight agreements with other spaceports around the world to manage the satellite launch operations. It hopes to eventually link up space flights through a global network of spaceports that could revolutionize air travel, allowing people to fly across the world in just a couple of hours.

“The first commercial spaceflight (in New Mexico) is important, but it’s just the start,” Branson said. “We want to prepare Virgin Galactic and the spaceport for the next chapter in commercial space aviation to become linked with a global network of spaceports, connecting the world like never before.”

About 100 Virgin Galactic employees will immediately begin relocating to New Mexico to join about 45 who are already here, bringing the company’s total local workforce to about 150 by the end of the summer, Whitesides said.

“The staff will be moving over the summer to support the team here and integrate into New Mexico,” Whitesides said. “We still have to finish the flight test program, but we’re on the final stretch, and we’ll do that in New Mexico.”

The company still won’t say when it will begin commercial operations with paying passengers.

Gov. Lujan Grisham said Virgin Galactic’s move to New Mexico will have a big impact on the state economy.

“Virgin Galactic’s announcement today is an incredibly exciting development for both our state’s economic future and the future of aerospace in general,” the governor said in a prepared statement. “With these workers here and with these plans firmly in place, I’m certain New Mexico will serve as the launchpad for the rapid industry growth we’ve been expecting for so many years. Today marks the beginning of the next chapter of aerospace in New Mexico.”

SANTA FE, NEW MEXICO (May 10, 2019) — At a press conference today at the New Mexico State Capitol Building in Santa Fe, hosted by New Mexico Governor Michelle Lujan Grisham, Virgin Founder Sir Richard Branson announced that Virgin Galactic’s development and testing program had advanced sufficiently to move the spaceline staff and space vehicles from Mojave, California to their commercial operations headquarters at Spaceport America, New Mexico. The move, which involves more than 100 staff, will commence immediately and continue through the summer, to minimise schooling disruption for families.

Virgin Galactic partnered with New Mexico in an agreement which saw the state complete construction of Spaceport America, the world’s first, purpose-built commercial spaceport, and Virgin Galactic committing to center its commercial spaceflight activities at the facilities once its vehicles and operations were ready for service.

This announcement signals the final countdown to a regular commercial spaceflight service for paying passengers and science research from Spaceport America. It follows the great progress in operational readiness at Spaceport, including the completion of the hanger, offices, fuel farm, warehouse and antenna for telemetry and communications, as well as interior fit-out. It also positions New Mexico on the frontline of technological innovation and, as one of the very few places on Earth that plays host to regular human spaceflight launches, a magnet for inward investment.

Virgin Galactic will reposition its space system consisting of carrier aircraft VMS Eve and spaceship VSS Unity from Mojave, California to Spaceport America over the summer months once cabin interior and other work has been completed by Virgin Galactic’s sister manufacturing organisation, The Spaceship Company (TSC). It will complete its final test flights from New Mexico for commencing a full commercial service for passengers and research payload. TSC will remain based in Mojave where it will continue building Virgin Galactic’s planned fleet of SpaceShipTwo and carrier aircraft WhiteKnightTwo vehicles.

Commenting on the announcement, New Mexico Governor Michelle Lujan Grisham said: “Virgin Galactic’s announcement today is an incredibly exciting development for both our state’s economic future and the future of aerospace in general.  With these workers here and with these plans firmly in place, I’m certain New Mexico will serve as the launchpad for the rapid industry growth we’ve been expecting for so many years. Today marks the beginning of the next chapter of aerospace in New Mexico.”​

Sir Richard Branson said: “Our Virgin Galactic adventure has been intertwined with New Mexico and Spaceport America right from the start and our stories have unfolded together. New Mexico delivered on its promise to build a world-first and world-class spaceport. Today, I could not be more excited to announce, that in return, we are now ready to bring New Mexico a world-first, world-class spaceline. Virgin Galactic is coming home to New Mexico where together we will open space to change the world for good.”

George Whitesides, CEO of Virgin Galactic and The Spaceship Company said: “The first photograph of Earth from space was taken over New Mexico in October of 1946.  How inspiring and appropriate that the state will soon host the first regular commercial spaceflight service, which will enable thousands of people to see Earth from space with their own eyes.  We are deeply grateful to the citizens and leadership of New Mexico for having the vision to create a better future for their children and all of humanity.”

Dan Hicks, CEO of Spaceport America added, “Going to space and exploring the universe is a team effort.  It takes strong partnerships that are courageous and also vulnerable.  Sir Richard’s visionary leadership to take meaningful risks along with New Mexico leadership’s far-sighted commitment – epitomizes the successful partnerships that are truly needed for the space industry.  I and the rest of the Spaceport America staff are extremely excited to support Virgin Galactic’s continued growth and future success here in New Mexico.”

Virgin Galactic is the world’s first commercial spaceline. Founded by Sir Richard Branson and owned by the Virgin Group and Mubadala Investment Company, Virgin Galactic will transform access to space for the benefit of life on Earth. To date, over 600 men and women from over 50 countries—greater than the total number of humans who have ever been to space—have reserved places to fly on Virgin Galactic’s reusable space launch system, consisting of carrier aircraft WhiteKnightTwo and spacecraft SpaceShipTwo. SpaceShipTwo and WhiteKnightTwo are manufactured and tested in Mojave, California by its manufacturing partner, The Spaceship Company (TSC). Spaceflight operations will be based at Spaceport America in New Mexico, the world’s first purpose-built commercial spaceport.

The Spaceship Company (TSC) is Virgin Galactic’s space-system manufacturing organization. Headquartered at Mojave Air and Space Port in Mojave, California, it is building and testing a fleet of WhiteKnightTwo carrier aircraft and SpaceShipTwo reusable spaceships that, together, form Virgin Galactic’s human spaceflight system. Its team of talented and dedicated engineers, technicians and professionals are drawn together by a willingness to disrupt and challenge the status quo and deliver innovative aerospace solutions to our customers’ needs. TSC’s extensive capabilities encompass preliminary vehicle design and analysis, manufacturing, ground testing, flight testing and post-delivery support.