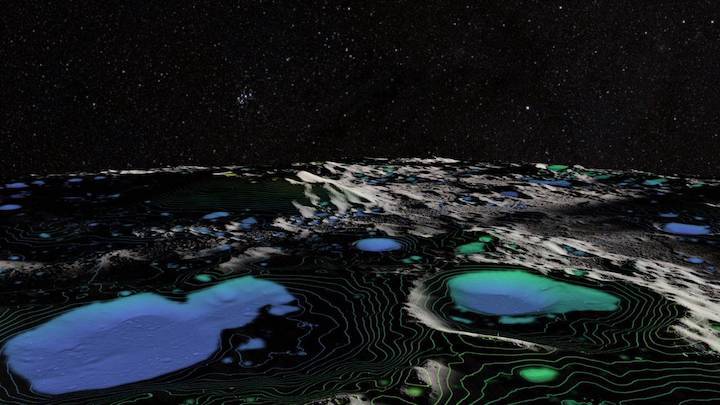 ORLANDO, Fla. - Located inside craters on the moon that have been in total darkness for billions of years lays a resource found all over Earth but is key to furthering space exploration: Ice.

TransAstra Corp, a California-based company, recently received a grant from NASA to further develop a plan, with the help of University of Central Florida planetary scientists, to mine the ice inside these dark craters, located at the moon's poles known as permanently shadowed regions, and turn it into fuel for rockets.

NASA Administrator Jim Bridenstine announced earlier this year the agency plans to return astronauts to the moon within five years, but this time, we won't be leaving. NASA plans to create a sustainable base on the lunar surface within a decade.

Much of the plans for the base and return to the moon have yet to be determined, including the cost, but what is clear is that the moon can be used as a resource to further planetary exploration. Launching from Earth is expensive; if NASA and commercial partners can use resources found off Earth, it will dramatically cut down costs of deep space travel.

The problem with mining frozen resources in total darkness inside a lunar crater is that there is no sunlight and solar power is critical to fueling rovers and spacecraft.

The game plan: Build mile-high towers with solar panels on the moon to harness the power of the sun and fuel robotic mining operations.

Instead of digging, the rovers would use TransAstra’s patent-pending Radiant Gas Dynamic mining technology to heat ice deposits to extract the water toward the lunar surface. The rovers would then collect the water and carry it back to storage tanks, according to the proposal. 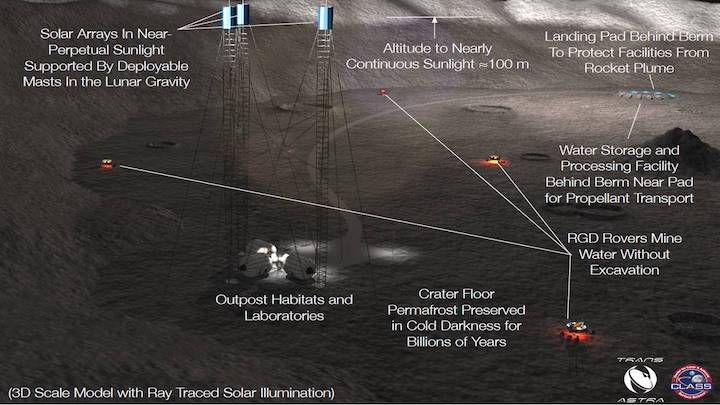 UCF planetary scientist Dan Britt and UCF post-doctoral scholar Kevin Cannon will assist TransAstra in finding the most valuable craters to be mined by large rovers.

Sercel described Britt as the "top planetary scientist in the world for understanding" planetary materials outside Earth.

Using data collected from NASA missions, including the Lunar Reconnaissance Orbiter, Cannon and Britt will be looking for craters that meet a specific criteria for mining operations.

The craters will be near poles of the moon, in "permanently shadowed regions" or areas of the moon that have gone without sunlight for as long as two billion years, according to NASA.

NASA's Lunar Reconnaissance Orbiter mapped the shape and elevation of these incredibly dark and cold areas, revealing which craters never receive sunlight and are cold enough for ice to build up. 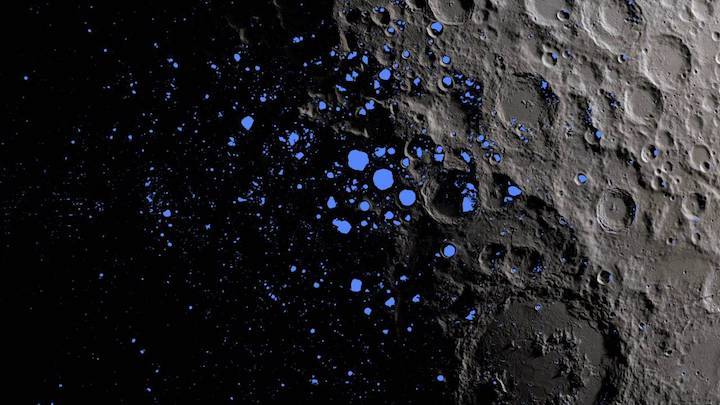 The blue areas on this image, produced with NASA's Lunar Reconnaissance Orbiter data, are permanently shadowed regions and cover which about 3 percent of the moon's south pole, likely containing resources for mining. (Image: NASA's Goddard…

The craters will also need to be the right size -- larger than 5 kilometers in diameter -- that are likely to have flat plains where rovers can easily operate, Cannon said.

“Our role is really to kind of provide the geological information of what the moon is like,” Cannon said, “taking some of these engineering pipe dreams and turn them into reality.”

With the six-month NIAC grant, UCF and TransAstra will develop key aspects of the mining concepts, including technological studies of how its systems will work and an economical analysis to show NASA how much the operation could save the United States.

"Most of the material that has to be launched into orbit (from Earth) is rocket propellant, radiation shielding and water," Sercel said. "Once you have water, you have all those things." He expects the lunar mining concept will save NASA billions.

Sercel said TransAstra will begin building a small scale version of the outpost with Texas A&M this fall.

While space mining is not a new concept it could be considered the next space race, as multiple international commercial companies are working toward the next "gold rush" to mine asteroids and moons for resources.

The goal of TransAstra is to build the "transcontinental railroad of space" mining space resources.

The NIAC program funds forward-looking research development that will eventually "change what the future will be," said Sercel, who is a four-time NIAC grant recipient.

Technology developed through the program can benefit the U.S. space agency as well as the private sector. In the case of the Lunar-Polar Propellant Mining Outpost, the benefits including replenishing rocket fuel and propellant to reduce the cost of transport to and from the moon by a factor of 10, Secrel said.

“There’s been this kind of stasis in terms of getting humans out of low Earth orbit and actually starting to develop space,” Cannon said. “I think this is a small first step, but it’s important to establish something like an outpost that is semipermanent. I think that goes a long way to getting people into space to stay sustainably.”