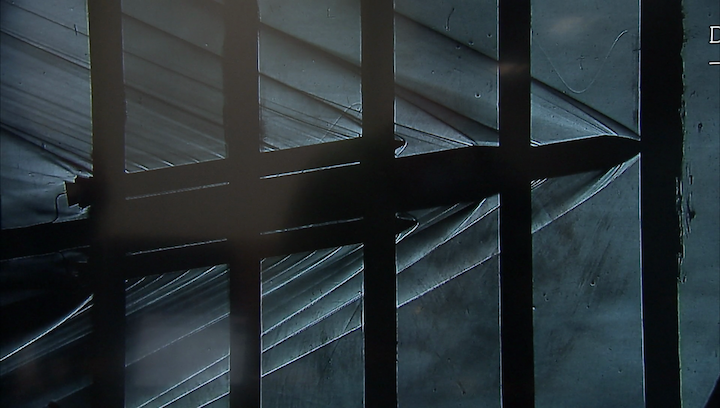 NASA engineers at the Langley Research Center in Hampton, Virginia, recently completed one set of wind tunnel tests in a series on the aerodynamics of the newest Space Launch System (SLS) vehicle configuration. Data was collected during several hundred supersonic test runs in the Unitary Plan Wind Tunnel at Langley of a scale model of the Block 1 Cargo vehicle that is the currently mandated booster for the upcoming Europa Clipper mission.

The first of six major testing campaigns began last year and are being conducted at NASA wind tunnels across the United States in support of the SLS Program’s design analysis of the new configuration. The aerodynamic data is used to refine analysis and modeling of the vehicle’s atmospheric trajectories, Guidance, Navigation, and Control (GNC), and structural loading.

Testing is planned to cover the early phase of flight all the way out to Solid Rocket Booster (SRB) separation, going back to the liftoff period to measure the effect of ground winds on the rocket, and also before liftoff while sitting on the Mobile Launcher.

A 0.8-percent scale model of the SLS Block 1 Cargo configuration was set up in the Unitary Plan Wind Tunnel at Langley for this round of aerodynamics testing. “We did about seven hundred runs, that was covering the Mach range in different pitches and rolls,” Courtney Winski, a research aerospace engineer at NASA Langley, said in an interview. “We just completed that test, that was Mach 1.5 to 4.5.”

“We did continuous runs and so we would set the model at a roll angle or at a pitch angle and then continuously take data while we either pitched at a set roll angle or rolled at a set pitch angle. And so we took about seven hundred of those runs over the Mach range. The entire testing took about a month, but that wasn’t all run time, it was about three weeks of actual ‘wind on’ running in the Unitary.”

(Photo Caption: 0.8 percent scale model of an SLS Block 1 Cargo configuration in the Langley Unitary Plan Wind Tunnel (UPWT) for aerodynamics testing. This model is configured with the shorter, 14-meter Delta 4 payload fairing (PLF) that would encapsulate Europa Clipper. The “Jupiter Direct” trajectory is performance-challenging for the Block 1 vehicle and the shorter fairing saves weight over the longer, 19-meter PLF.)

“A single run where we would pitch about twenty-four degrees just to kind of completely cover every option would take a little over a minute, [where] it was sitting at a single Mach number,” she noted. The same data set would be collected in another run at another Mach number until the whole range was covered.

“The way that we would qualify it as is that the flight is quasi static in terms of Mach number,” Jeremy Pinier, NASA’s SLS Aerodynamics Team Lead at Langley, said in the interview. “From liftoff to booster separation, that’s around two minutes, so it goes from Mach zero to Mach four and a half in two minutes but that’s actually pretty long and so we consider the state of the flow as quasi static.”

“The main data that we’re collecting was force and moment data on the model,” Winski noted. “On this model we did not have pressure ports, but we did [have] the pressure sensitive paint (PSP).”

The luminescent paint provides visual data of the distribution of pressure over the model during wind tunnel testing. “There are special lights on the tunnel,” Winski noted. “How much it actually causes the model to luminesce, because it’s reacting with how much oxygen is in the air, is related to the pressure that it is seeing, how much light is luminescing off of it.”

“We would have to sit at a condition for like thirty seconds or so and they would take images with the model just sitting still with conditions not changing.” 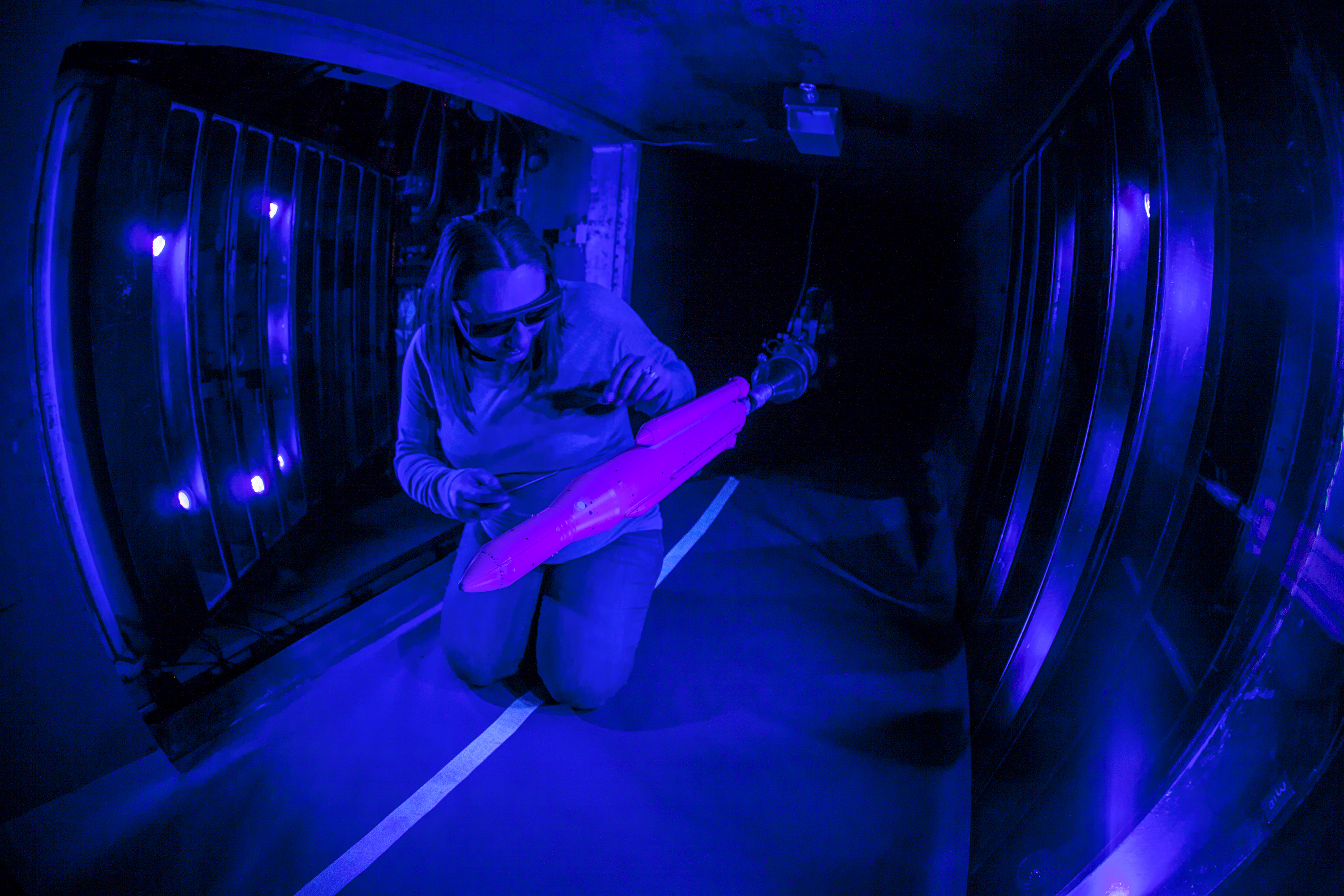 (Photo Caption: NASA Langley aerospace engineer Courtney Winski prepares the 0.8-percent, short-fairing Block 1 Cargo model for UPWT test runs with pressure sensitive paint. The paint luminesces under special lighting to indicate the pressure distribution over the model. A set of test runs is performed both with and without the paint.)

“The paint is very sensitive, we can only use it for one test,” Pinier said. “It’s sensitive to light, it’s sensitive to oils on your hands, so if you touch the model it can damage the paint. So we paint it once for each test and then we can remove it and paint it again.”

“We’re thinking at some point we’ll be able to characterize the buffet environment using the unsteady pressure sensitive paint. I say at some point because it needs validation, this technology needs to be validated first.” 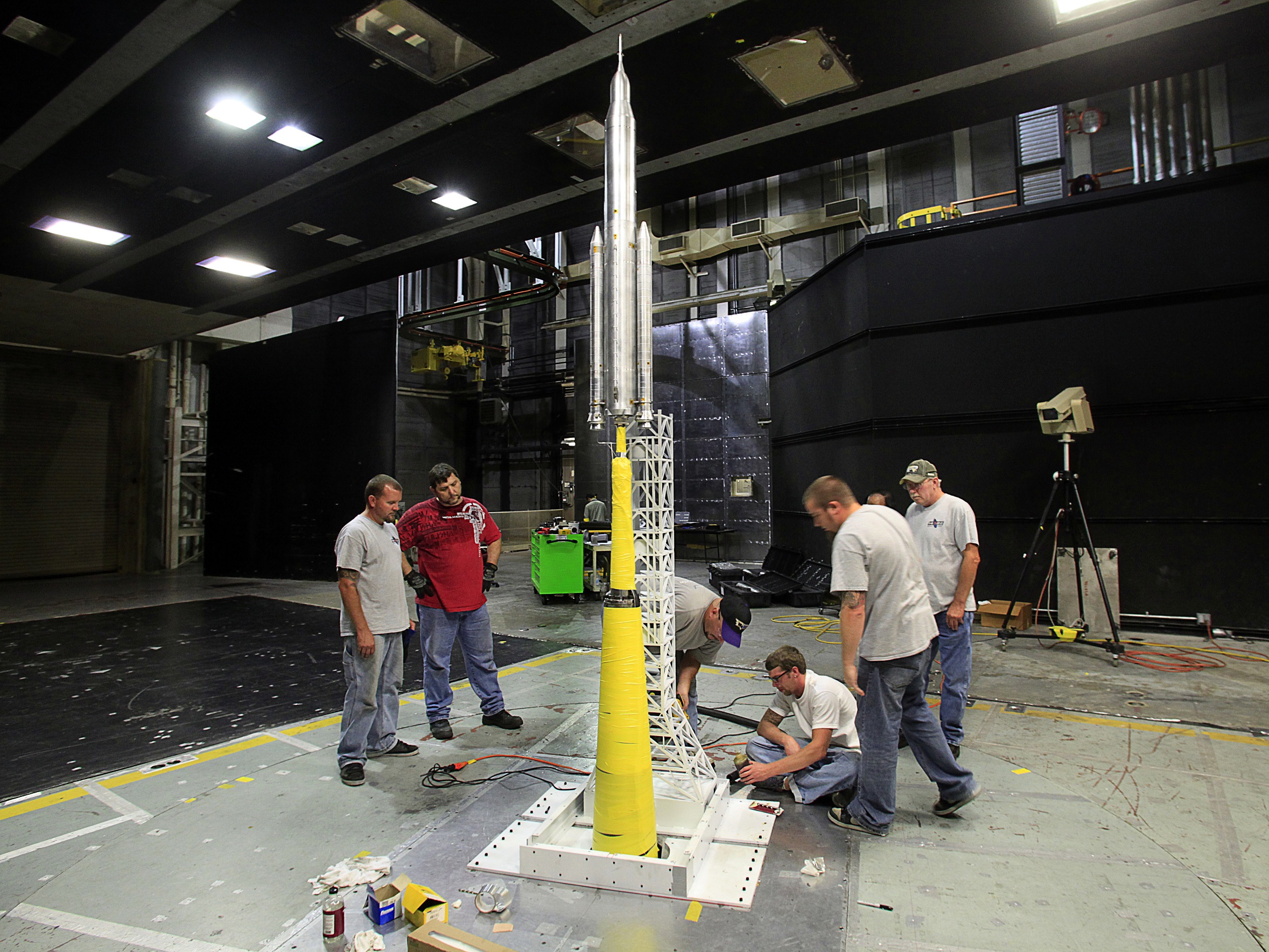 (Photo Caption: NASA engineers and contractors set up for a liftoff test of a Block 1B Crew vehicle and Mobile Launcher subscale model in Langley Research Center’s 14-by-22-foot subsonic wind tunnel in 2013. The tests measure wind-induced forces on the vehicle, the umbilical tower/launch platform, and the connected pair from rollout to the pad through liftoff. Langley is getting ready to repeat the same series of tests in this wind tunnel for the new Block 1 Cargo configuration.)

The testing is intended to create an aerodynamic database for the vehicle configuration, from rolling out to the launch pad through liftoff, through the Boost phase of flight that goes through SRB separation and beyond. “At liftoff you’ve got the ground winds that are pushing on the vehicle and the tower and those two are connected,” Pinier explained. “We’re really interested in the ground wind loads on the tower and the vehicle, just static loads from winds from all directions, north, south, east, west.”

“They’re also interested in when they are rolling out the vehicle on the Mobile Launcher from the Vehicle Assembly Building to the launch pad there’s also ground wind environments there.”

“As you’re accelerating you go through Mach 1, you know lots of things happen around Mach 1,” he continued. “The fluid dynamics around Mach 1, speed of sound, are very non-linear. The unsteady pressure environment on the vehicle is the highest and that’s what creates buffet. Basically you can think of it as the air kind of shaking the vehicle structure around Mach 1.”

“So you go through Mach 1, you get past peak buffet loads and then you get to maximum dynamic pressure, which is when basically the force of the air on the vehicle, the static force is the highest,” he continued. “You get max dynamic pressure between Mach 1 and 2. The loads guys are mostly interested in the static loads on the vehicle during that [phase] in flight.” 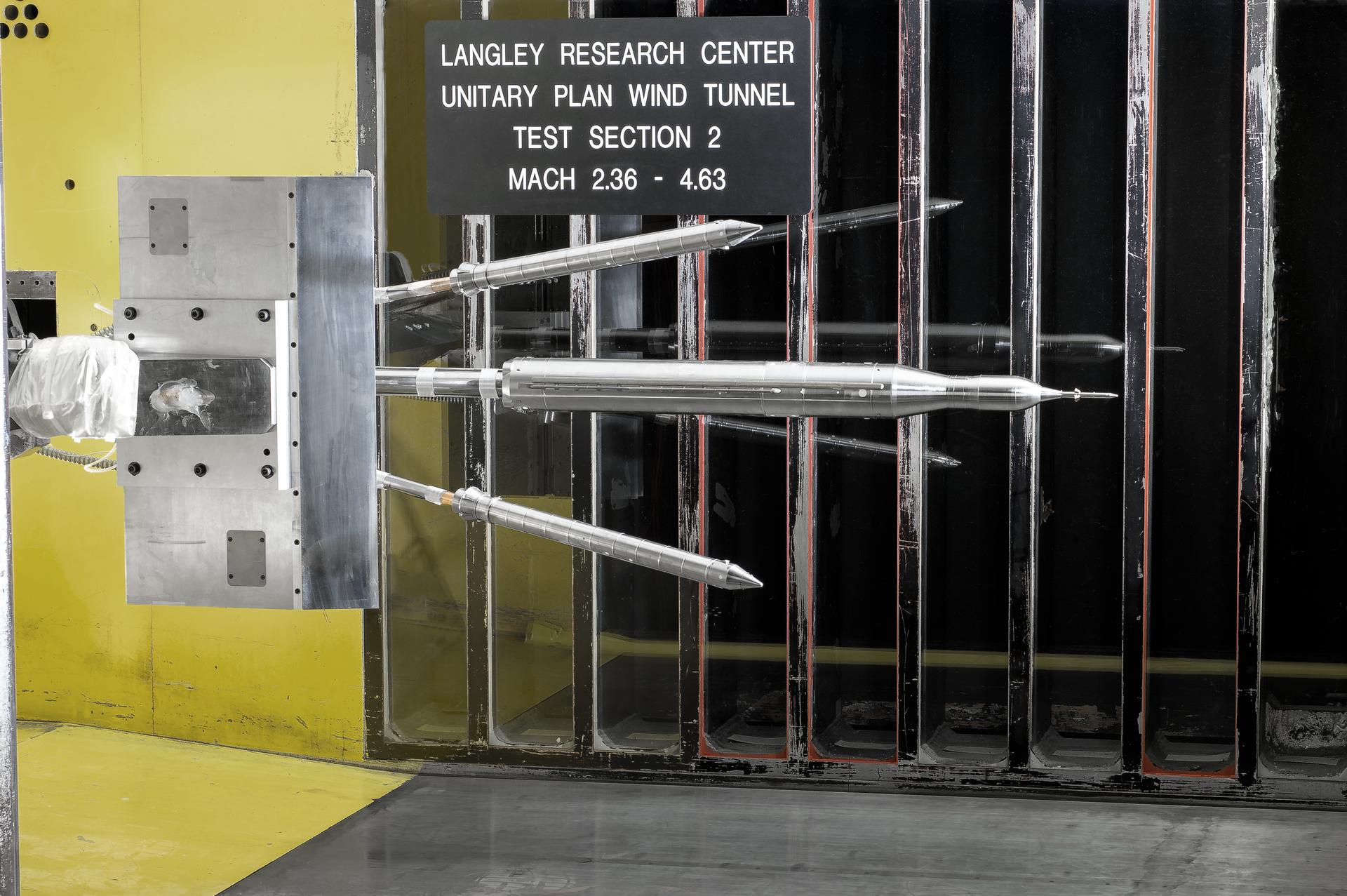 “And then you accelerate and everything [in] the environments start to tail off. Aeroacoustics is still present but it’s also tailing off.”

“Some of the things we look at as we get to higher and higher altitudes and close to booster separation is something called plume induced flow separation,” he added. “The plumes of the vehicle as you’ve probably seen when the rocket launches and gets to high altitude become very underexpanded, meaning they become very large and they can induce local separation of the flow on the back of the vehicle so we try to look at that at the highest Mach numbers.”

“And then you get to booster separation around Mach 4, Mach 5, and that’s where we have to characterize that environment to make sure that the boosters don’t come back and contact the Core Stage.”

Testing all of those regions in the early phase of flight involves wind tunnels at NASA centers across the country. “We tested at the Marshall (Space Flight Center) fourteen-inch trisonic tunnel to get some data quickly,” Pinier said.

“We can test quickly in that tunnel and get the data for initial design cycles; however, very quickly for this one we needed mature data so where we’ve got [is] we’re probably in the middle of a testing campaign that comprises six large wind tunnel tests. This picture that you saw was from the test at the Langley Unitary Wind Tunnel to cover the high supersonic Mach range.”

“We have also run a wind tunnel test at the Ames (Research Center) Unitary Plan Wind Tunnel to cover the subsonic to about Mach 2.5 range for ascent, that was a 1.3 percent scale model,” he added. “We are current getting set up to run a liftoff test at the Langley fourteen by twenty-two wind tunnel to cover the liftoff phase of flight and a 1.75 percent scale model along with a 1.75 percent scale Mobile Launcher. We’re trying to characterize the liftoff environment with winds from all directions and basically the entire rollout to liftoff phase of flight.” 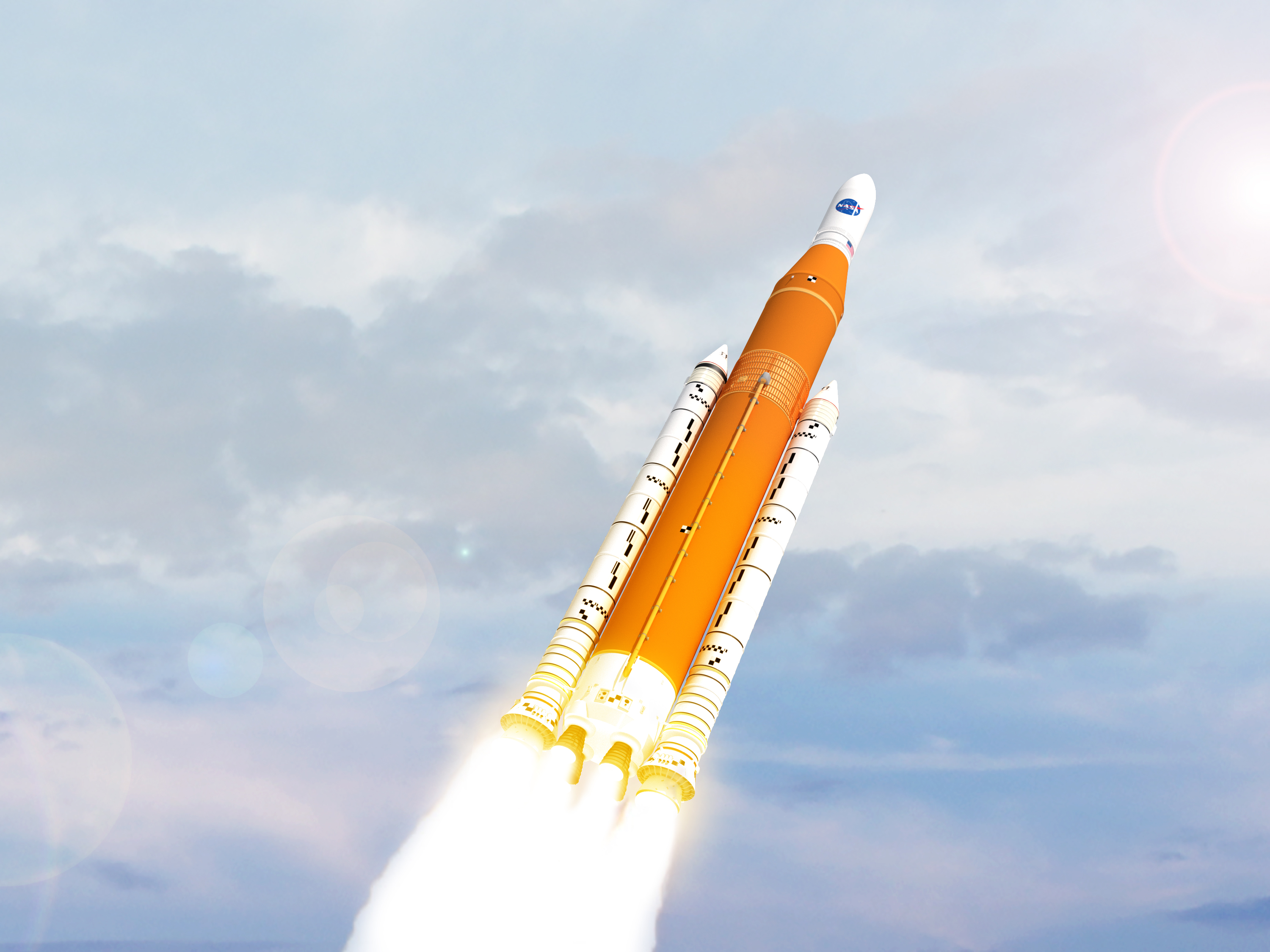 (Photo Caption: Artist rendering of the SLS Block 1 vehicle, customized to the Block 1 Cargo configuration with the short PLF.)

“The sixth one is going to be a booster separation wind tunnel test at the Langley Unitary Plan Wind Tunnel and that’s going to be a static 0.9 percent scale model. Those tests are pretty standard, those are critical phases of flight where we need to get that data right and so we rely heavily on wind tunnels for those critical databases.”

“For pretty much every configuration of the Space Launch System family we’ve run those tests,” Pinier added. “We’re just doing it all over for this particular configuration.”

The database being generated for this vehicle configuration from the wind tunnel testing is used by different design groups. “There’s really two customers for us — for the aerodynamics team,” Pinier explained. “One of them is the trajectory and guidance navigation and control teams. They are interested in databases to cover the entire Mach range.”

“We take force and moment data for the entire Mach range and we put it in databases, give that to them,” he added. “They design trajectories, they run Monte Carlo simulations…in dispersed flight conditions throughout the entire Boost phase. So that’s one of the customers — integrated forces and moments go to GN&C and trajectory.”

(Photo Caption: On the left, Computational Fluid Dynamics (CFD) modeling of the Block 1 Cargo vehicle in supersonic flight. On the right, a Schlieren image of a 0.8 percent scale model of the vehicle in Langley’s supersonic wind tunnel at a supersonic Mach number. The force-moment and pressure data collected in the wind tunnel tests validates and is fed back into the analytical models.)

“So for example, buffet. We don’t have to characterize buffet throughout the entire Boost phase because we know buffet peaks around Mach 1 so we focus on transonic conditions for buffet environment.”

“So those are the two biggest products, the aeroacoustics and the buffet, [that] go to the loads team that are kind of critical,” Pinier said. “A third one would be just the static loading, the distribution of the loading during ascent.”

“It’s not a driver for design, but we produce that. That comes mostly out of CFD (computational fluid dynamics), basically the distribution of the pressures over the entire vehicle as it goes through the Boost phase, but now that we have pressure sensitive paint when we’re doing force-moment measurements we try to do this pressure sensitive paint measurement in order to validate the CFD.”