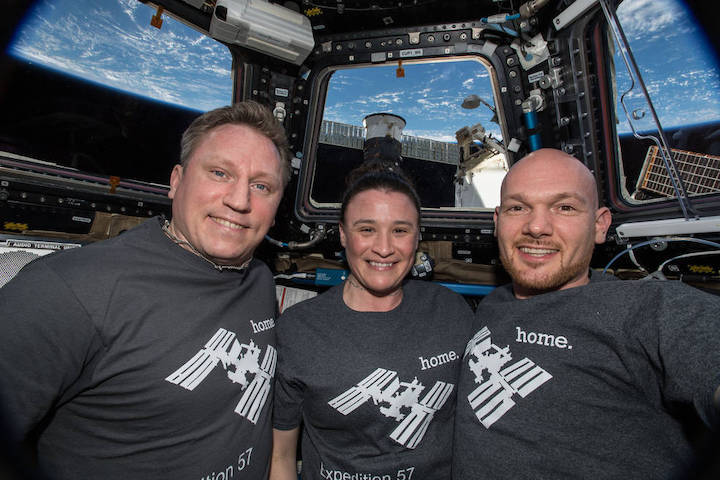 The three Expedition 57 crew members are gathered inside the cupola, the International Space Station's "window to the world," for a portrait wearing t-shirts displaying their home in space. From left are Sergey Prokopyev of Roscosmos, Serena Auñón-Chancellor of NASA and Alexander Gerst of ESA (European Space Agency). The space station was orbiting nearly 253 miles above the Solomon Islands in the South Pacific Ocean
Credits: NASA

Three residents of the International Space Station, including one NASA astronaut, are scheduled to wrap up their stay aboard the orbital laboratory Wednesday, Dec. 19. Live coverage of their return to Earth will air on NASA Television and the agency’s website.

The crew is completing a 197-day mission spanning 3,152 orbits of Earth and a journey of 83.3 million miles. Auñón-Chancellor and Prokopyev are completing their first flights into space, while Gerst will be returning from his second long-duration mission. With a total of 362 days in orbit, Gerst will hold the flight duration record among ESA astronauts.

Coverage of the Expedition 57 departure and landing activities is as follows (all times EST):

After landing, the crew will return by helicopter to the recovery staging area in southern Kazakhstan, where they will split up to travel to their respective homes.

At the time of undocking, Expedition 58 will formally begin aboard the station, with NASA’s Anne McClain, David Saint-Jacques of the Canadian Space Agency, and Kononenko comprising a three-person crew for just under three months. The next residents to the space station — Nick Hagueand Christina Koch of NASA and Alexey Ovchinin of Roscosmos — will launch aboard Soyuz MS-12 Feb. 28, from the Baikonur Cosmodrome in Kazakhstan, to join Expedition 58 following a six-hour journey.