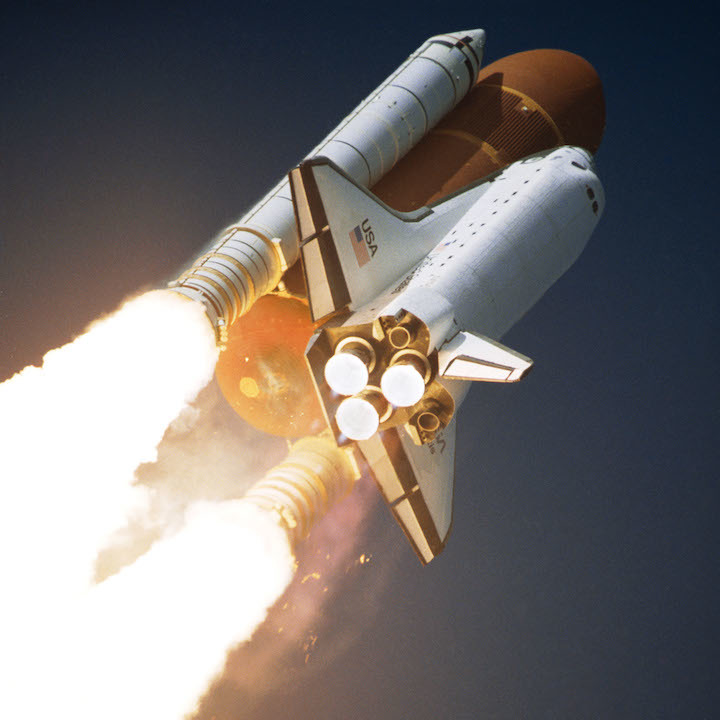 Atlantis roars to orbit on the morning of 2 December 1988, 30 years ago today. Photo Credit: NASA

Thirty years ago, at 9:30 a.m. EST on 2 December 1988, Atlantis rocketed into crystal-blue Florida skies to begin the second shuttle mission in the wake of the Challenger tragedy. Two months earlier, her sister Discovery had brought the fleet back to active service and the task of the five STS-27 astronauts—Commander Robert “Hoot” Gibson, Pilot Guy Gardner and Mission Specialists Mike Mullane, Jerry Ross and Bill Shepherd—was to deploy a classified payload on behalf of the Department of Defense. Although that objective apparently proceeded without significant incident, the mysterious flight of STS-27 earned a place in the history books, when the hands of fate unexpectedly turned against the astronauts and brought them within a hair’s breadth of disaster. 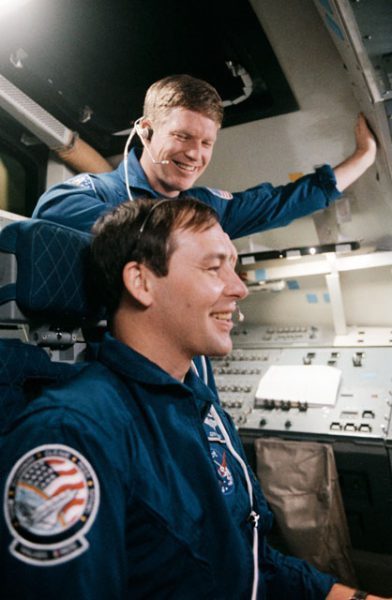 The crew had been announced a year earlier, in September 1987. Gardner, Mullane and Ross had been training at the time of Challenger’s loss to fly the first shuttle mission out of Vandenberg Air Force Base, Calif., whilst Gibson and Shepherd were new additions. During their training, they earned the nickname “Swine Flight” from the astronaut office secretaries, and were even given novelty pigs’ snouts, as a result of Gibson’s penchant for making animal-like snorts whenever attractive women were in the vicinity. As a secret mission, not even the launch time of STS-27 was released until 24 hours prior to T-0. Years later, in his memoir, Riding Rockets, Mullane remembered that the flight software was classified, and Ross noted that they worked in secured training facilities, which were electronically “swept” to ensure no inadvertent electronic or voice signals getting in or out. “It constrains you significantly on how and where you can do business,” Ross told a NASA oral historian, adding that he sometimes could not even tell his wife where he was going or when he might be home. Not for five years after the mission were the crew permitted to reveal even the slimmest of facts: that they utilized the shuttle’s Canadian-built Remote Manipulator System (RMS) to deploy their classified payload.

Launch was originally targeted for 1 December 1988, but was scrubbed, due to unacceptable cloud cover and strong winds at the Kennedy Space Center (KSC) in Florida. Next day, conditions were more suitable, and Atlantis sprang from Pad 39B to begin her third orbital voyage. Nine minutes later, the astronauts reached space, albeit not safely. The events of the next few days would highlight how fine the line was between success and failure on a shuttle mission. And it was not until after STS-27 ended that the crew—and flight controllers—became fully aware of how close they came to death. 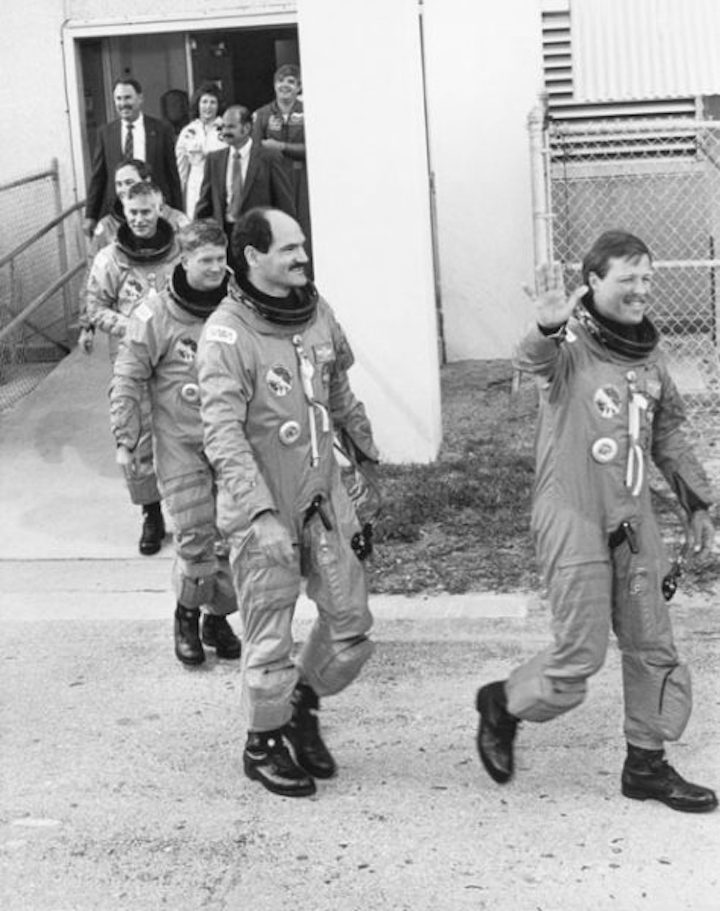 A few hours into the mission, Mullane uncradled the RMS arm from the port-side sill of the shuttle’s payload bay and began the process of deploying the classified cargo, which is generally thought to have been a Lockheed Martin-built radar-imaging and all-weather-surveillance reconnaissance satellite, part of a program variously known as “Lacrosse” or “Onyx”. In his memoir, Mullane remembered the process. “For once, the incredible beauty of the Earth passed unseen beneath me,” he wrote. “I had eyes only for the payload, Atlantis and the robot arm…I steered the end of the arm over the payload grapple fixture and fired the snare, which rigidly latched the payload to the arm.”

Downstairs, in the airlock, Shepherd watched through a porthole to ascertain clearances between the giant satellite and the payload bay envelope. At length, Mullane “flew” the payload to its deployment attitude and flight controllers issued a “Go” for release. Images purportedly showing a Lacrosse under construction in the 1990s illustrate a giant beast of a satellite, costing around a billion dollars per unit, and equipped with a large radar antenna and solar arrays whose total wingspan might have reached 165 feet (50 meters). 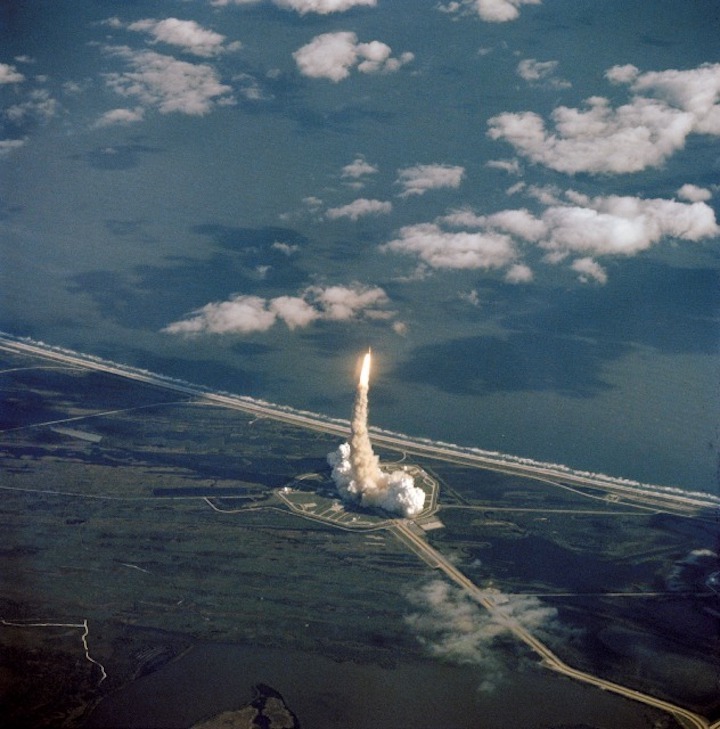 As Lacrosse drifted away into the inky blackness, the first great unknown of STS-27 reared its head: the rumor of the “secret EVA”. This story came to light more than a decade later, during STS-98, which was meant to feature the 100th U.S. spacewalk. But as astronauts Tom Jones and Bob Curbeam prepared to make a comment about the historic feat, they were told that a miscount had been made and the actual 100th U.S. spacewalk would occur on their next outing a couple of days later. “How could that happen?” historian Michael Cassutt queried in an August 2009 article for Air & Space. “Had there been a secret spacewalk that never made it into the official tally?” To this day, no one knows. But one of the STS-27 astronauts did make an offhand reference to their payload experiencing some sort of problem, which required a re-rendezvous and some kind of repair. “We separated from it and it had a problem,” Gibson recalled in a 2001 interview for the Smithsonian. “We re-rendezvoused with it and assisted with fixing it, separated again and left it.”

Early the next day, 3 December 1988, the crew awoke to worrying news. A review of launch video showed a piece of debris—probably a bit of ablative insulator—breaking away from the nose of one of the Solid Rocket Boosters (SRBs) around 85 seconds after liftoff and hitting Atlantis’ fragile Thermal Protection System (TPS). If the heat shield was damaged, it could spell disaster during the fiery return to Earth and Gibson’s was instructed to use RMS cameras to acquire imagery. With mounting horror, the camera revealed white streaks of damage along the shuttle’s fuselage, evidence that the outer black coating had been stripped away by a kinetic impact. “We could see that at least one tile had been completely blasted from the fuselage,” Mullane wrote. “The white streaking grew thicker and faded aft beyond the view of the camera. It appeared that hundreds of tiles had been damaged and the scars extended outboard toward the carbon composite panels on the leading edge of the wing.” 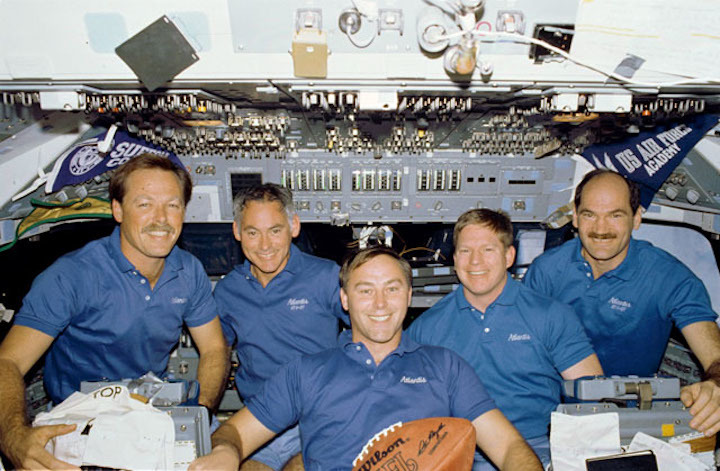 Gibson reported the extent of the damage to flight controllers, but the response came back that the images did not look to represent a significant breach of the TPS. Worse, the astronauts’ downlinked data was encrypted for security and its slowness meant that the images received on the ground were of low quality. Flight controllers were convinced from the grainy images that the damage was not severe and that the crew were mistakenly seeing damage in conditions of poor lighting. For his part, Gibson was furious and certain that Atlantis had sustained severe damage. He told his crew to enjoy the final days of the flight. “No use dying all tensed-up,” he said.

Early on 6 December, after four days in orbit, Gibson fired Atlantis’ twin Orbital Maneuvering System (OMS) engines to begin the hour-long hypersonic descent back to Edwards Air Force Base, Calif. As they descended across the Indian Ocean, streaked across Australia and over the darkened Pacific Ocean, Mullane wondered what was happening as the orbiter’s belly steadily heated up beneath them. None of their flight deck instruments showed the temperature of Atlantis’ skin—only flight controllers had that data—and at length the shuttle passed through the region of peak heating. Traveling at five times the speed of sound, Gardner deployed air-data probes from the nose to provide airspeed and altitude data. 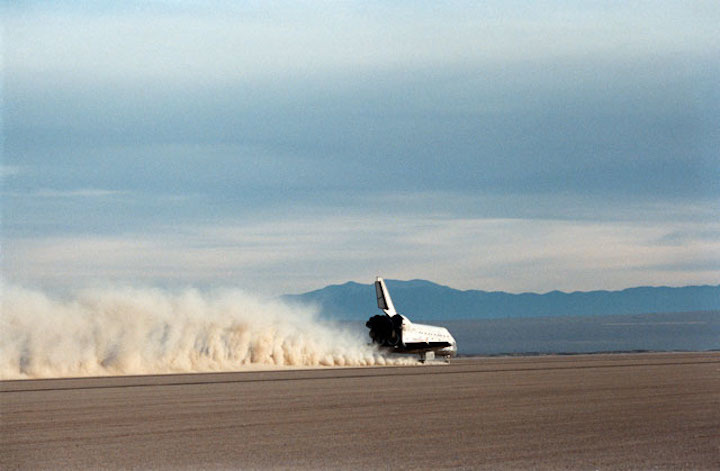 Years later, Gibson recalled that, at the critical period of high heating, his eyes had been focused on the gauge which showed levels of deflection in the elevons on Atlantis’ wings. “If we started to burn-through,” he said later, “we would change the drag on that wing, which is exactly what happened to Columbia. We would start seeing “right-elevon trim”, which means moving the left elevon down. I knew we would start developing a “split” between the right and left wing elevon positions if we had excessive drag over on the right side. The automatic system would try to trim it out with the elevons. That is one of the things we always watched on re-entry, because if you had half a degree of trim, something was wrong. You had a bunch of something going on if you had even half a degree. Normally, you wouldn’t see even a quarter of a degree of difference on that thing.” Before entry interface, Gibson had privately concluded that if he did see an elevon split of beyond a quarter of a degree, he had about 60 seconds of life remaining in which to tell Mission Control exactly what he thought of their heat shield “analysis”…

On STS-27, Atlantis and her crew were lucky, touching down on Edwards’ dry lakebed Runway 17 at 3:36 p.m. PST (6:36 p.m. EST), after a mission of four-and-a-half days. When the astronauts disembarked, they saw a gaggle of engineers gathered around the shuttle’s nose, shaking their heads in disbelief at the extent of the damage. More than 700 tiles had been damaged and one, close to Atlantis’ nose, was missing. The damage extended right from behind the nose cap, along the belly and stopped just short of the wing leading edges. The rudder speed brake had been hit repeatedly and the OMS pods hat 14 impacts. It began to dawn on everyone that Gibson, Gardner, Mullane, Ross and Shepherd had cheated death by a hair’s breadth.

A TPS damage review team subsequently traced the cause to a change in the manufacturing process of SRB materials, which was intended to improve the performance of the ablative materials needed to protect the boosters from aerodynamic heating. But in Gibson’s mind, better had proven the enemy of good enough on STS-27; if the system worked, there was no need to change it. More significantly, this was only the second mission after the Challenger tragedy. Had STS-27 not made it home safely, 30 years ago this week, it is highly probable that America’s shuttle program would have breathed its last breath.