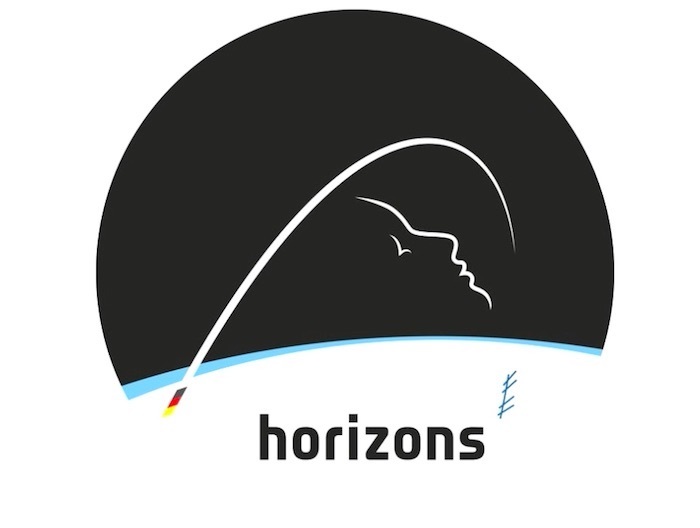 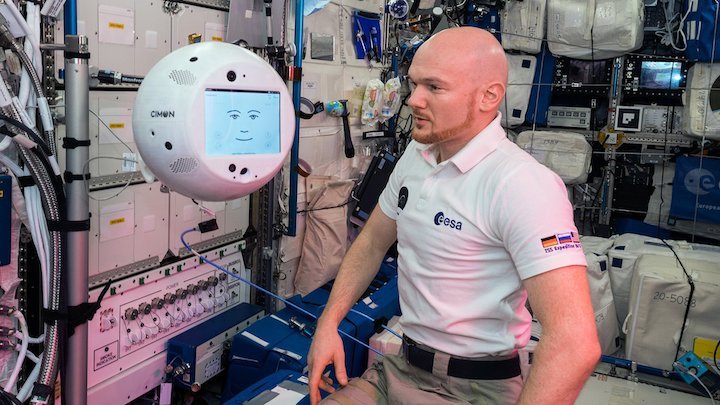 The astronaut assistant, CIMON* (Crew Interactive Mobile CompanioN), developed and built by Airbus on behalf of the German Aerospace Center (DLR), has passed its first tests in space with flying colours. It worked together with German ESA astronaut, Alexander Gerst, in the Columbus module of the International Space Station (ISS) for around 90 minutes.

Gerst has been living and working on the ISS since 8 June 2018. His current horizons mission, lasting six months, includes conducting a series of tests with CIMON. This medicine-ball-sized plastic sphere, which weighs five kilogrammes, was created using 3D printing and is the first AI-based astronaut assistant – an experimental technology studying human-machine interaction in space.

At 11:40 h CET on 15 November 2018, the German-Swiss CIMON mission team at Lucerne University’s BIOTESC ground control centre in Switzerland waited with bated breath. After two and a half years of intense preparation and countless hours of training, it was so quiet you could have heard a pin drop, the air thick with intense concentration and joyful anticipation. Following a software upload to the ISS and a software update for CIMON itself, an audio check and a test of the navigation camera, Alexander Gerst finally came face to ‘face’ with his new artificial roommate, activating it for the very first time. The first ‘meeting’ between the German ESA astronaut and the free-flying robotic crew assistant, a world first, lasted 90 minutes.

CIMON’s autonomous navigation was then tested, seeing the assistant perform several turns and movements in every direction. It was able to search for Gerst’s face and make ‘eye’ contact. As a demonstration of its assistance capabilities, CIMON displayed instructions for a school science experiment on crystallisation and a video of the Rubik’s cube puzzle on its ‘face’, a screen set in the centre of the sphere, and played a piece of music. It then tested its ultrasonic sensors, which have a similar function to a car’s parking sensors, and took a photo and shot a video of Gerst using its integrated cameras. Finally, Gerst returned his crew assistant to its place in the Columbus module.

“CIMON represents the realisation of an Airbus vision. It is a huge step forward for human space flight, achieved by working in cooperation with our partners. With CIMON, we have laid the foundations for social assistance systems that are designed to be used under extreme conditions,” said Till Eisenberg, CIMON Project Manager at Airbus.

“It is an incredible feeling and absolutely fantastic to be able to experience CIMON actually seeing, hearing, understanding and speaking. This first, real deployment in space has made aerospace history, and marks the start of what will hopefully be a long deployment on the ISS,” said Dr Christian Karrasch, CIMON Project Manager at the DLR Space Agency. “I am fascinated by interactions with artificial intelligence. The CIMON system is the only one of its kind, and was designed specifically for deployment on the International Space Station. We are entering uncharted territory and pushing the boundaries of technological expertise in Germany.” 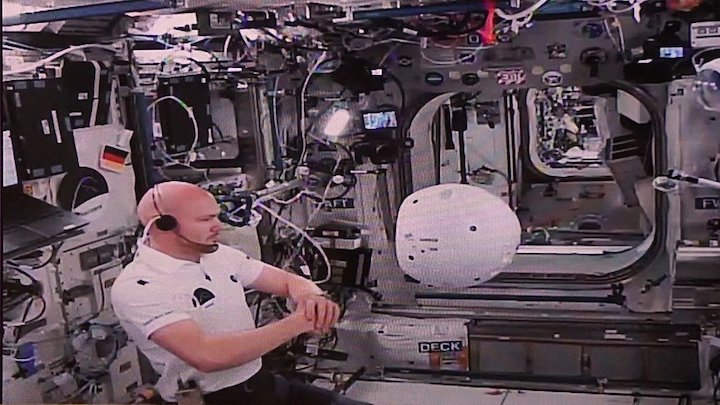 CIMON uses the Wi-Fi on the ISS to transmit data, making use of satellite connections to ground stations to establish an internet connection with the IBM Cloud. Matthias Biniok, IBM project lead, explained the processes that then take place in CIMON’s ‘brain’: “If CIMON is asked a question or addressed, the Watson AI firstly converts this audio signal into text, which is understood, or interpreted, by the AI. IBM Watson not only understands content in context, it can also understand the intention behind it. The result is a tailored answer, which is converted into speech and then sent back to the ISS, enabling a natural, dynamic spoken dialogue.” 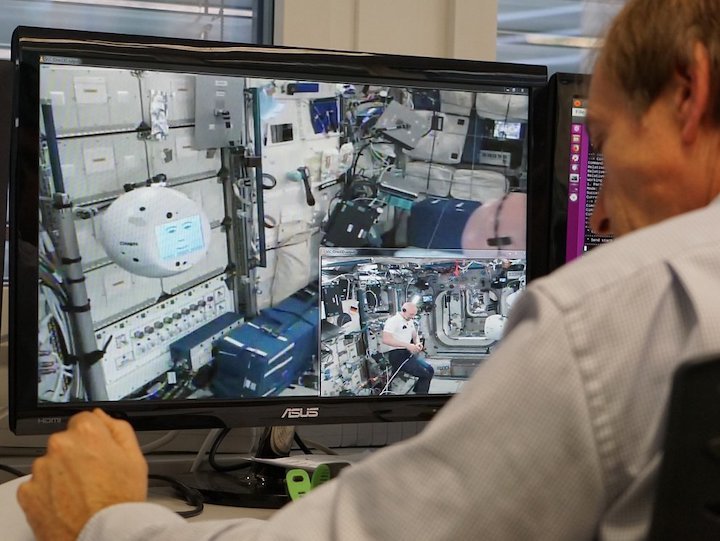 Bernd Rattenbacher, team leader at the ground control centre at Lucerne University, said: “The data link to Earth is established via satellite to NASA/ESA and to the DLR’s Columbus control centre in Oberpfaffenhofen, Germany. From there, the signal is transmitted to us, the CIMON ground station at BIOTESC in Lucerne, the Swiss User Support and Operations Center, which is connected to the IBM Cloud in Frankfurt over the internet. The time needed for the signal to be transmitted via satellite is 0.4 seconds each way. A number of firewalls and VPN tunnels are in place to ensure data security.” 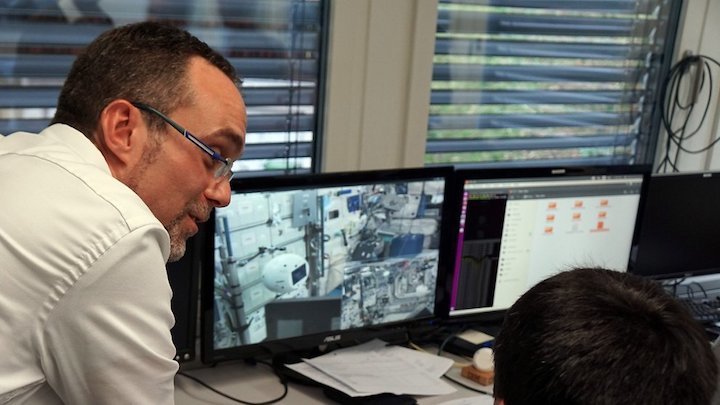 CIMON also has a scientific background: its advisors are Dr Judith-Irina Buchheim and Professor Alexander Choukèr from the Department of Anaesthesiology at the Ludwig-Maximilian University Hospital in Munich. Buchheim said: “As a partner and assistant, CIMON could support astronauts with their high workload of experiments and maintenance and repair work, thereby reducing their exposure to stress.”

These Astronaut Photos of a Soyuz Launch from Space Are Just Incredible!

Gerst shared the photographs on Twitter with a message welcoming his new roommates — NASA's Anne McClain, Roscosmos's Oleg Kononenko and the Canadian Space Agency's David Saint-Jacques, all members of Expedition 58 — to space. 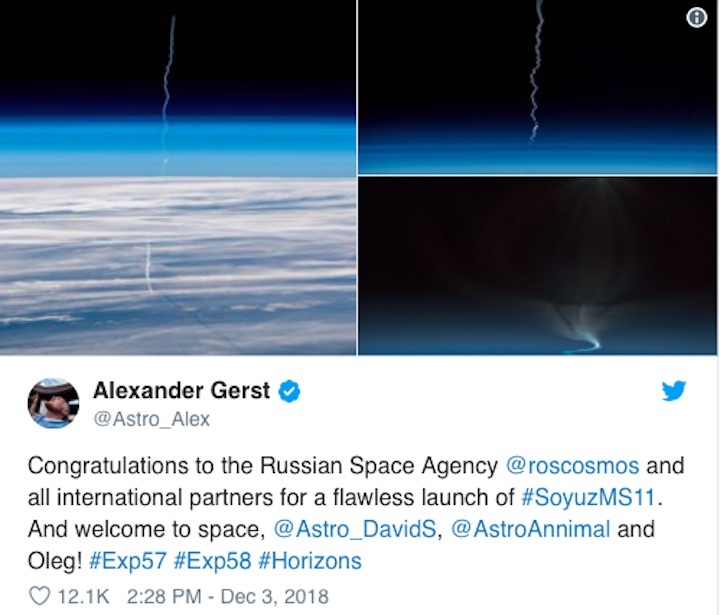 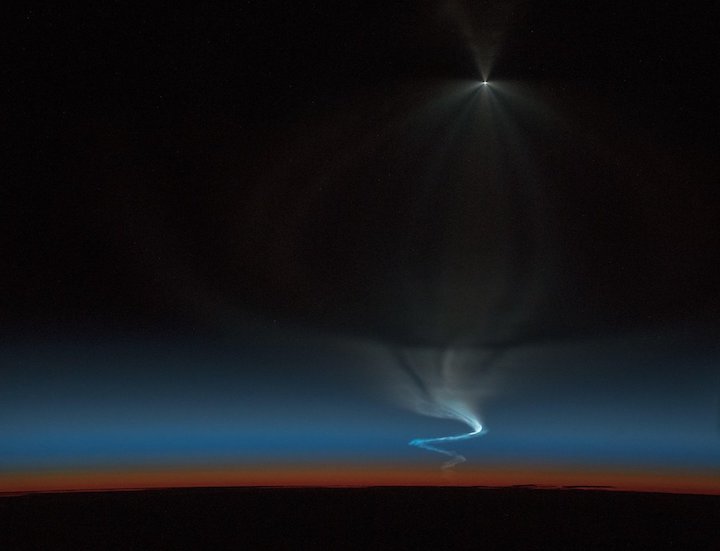 The launch, which took place from Baikonur Cosmodrome in Kazakhstan as the sun was setting, was the first crewed launch since an anomaly during booster separation sent two astronauts falling back to Earth in an emergency landing on Oct. 11.

But today, everything went precisely according to plan, with an on-schedule and anomaly-free liftoff at 6:31 a.m. EST (1131 GMT). Blastoff kicked off a 6-hour-, four-orbit-long journey to the space station for the trio of astronauts on board. 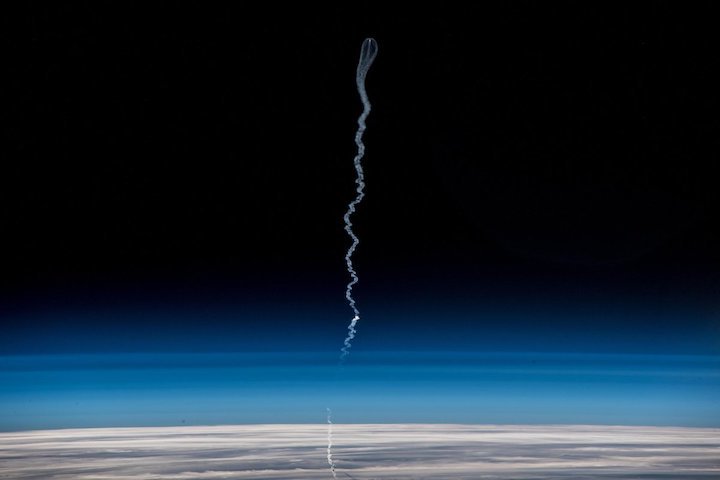 Once they reach the orbiting laboratory, they'll face a busy schedule that includes welcoming a cargo shipment this week, conducting a spacewalk next week, and saying farewell to the three astronauts who have been living in space since June.

That includes Gerst, as well as his colleagues U.S. astronaut Serena Auñón-Chancellor and Russian cosmonaut Sergey Prokopyev, who will head back to Earth on Dec. 19. We'll miss Gerst's incredible photography skills. 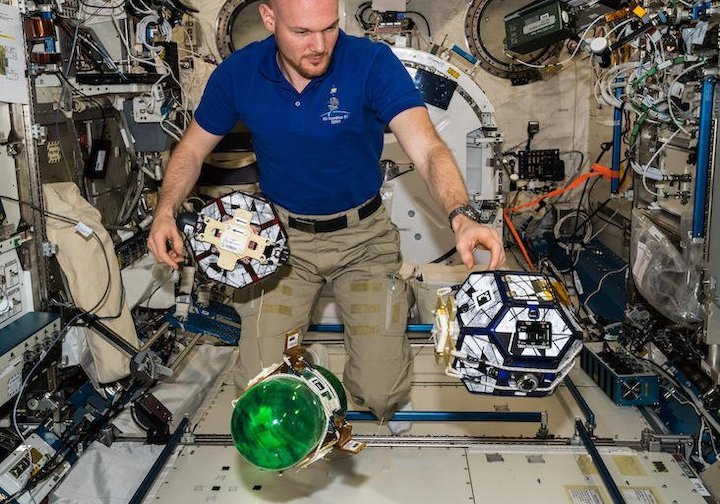 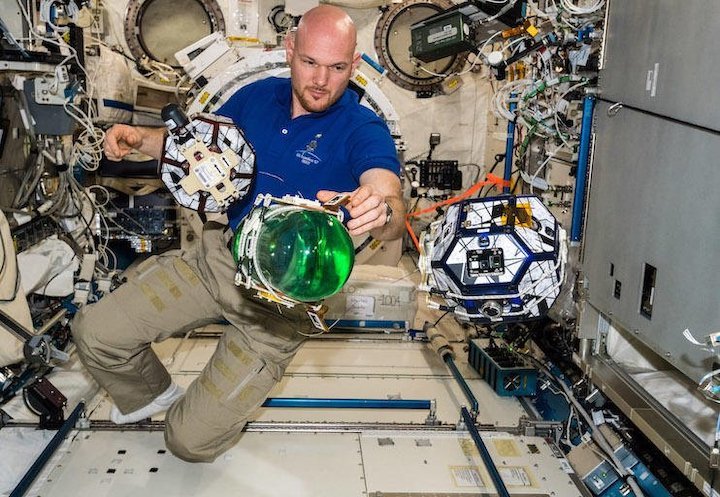 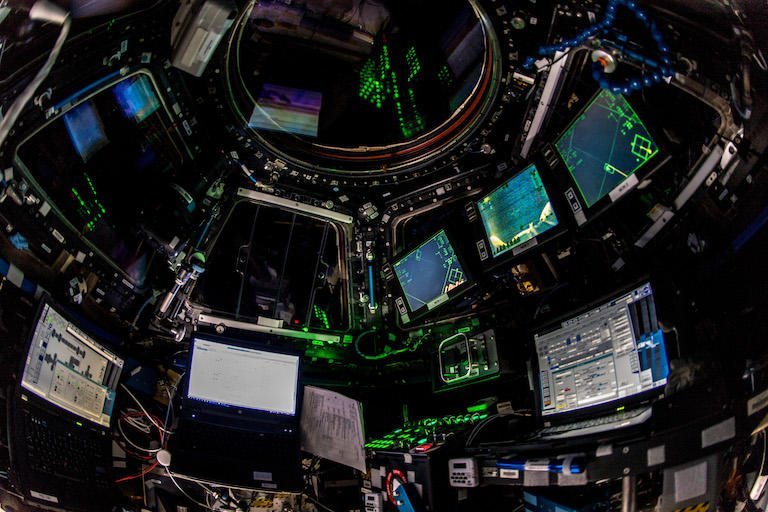 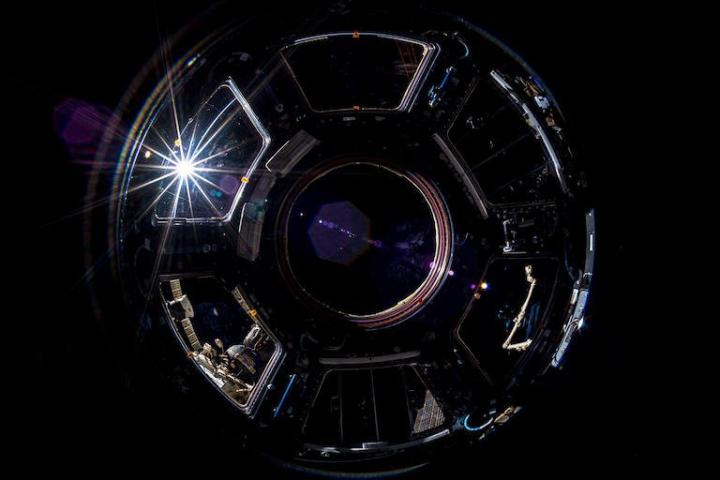 Captions and subtitles are available (automatically generated by YouTube) - select your language using the YouTube player controls.
A non-YouTube version is available using the 'download' and 'source' buttons below. 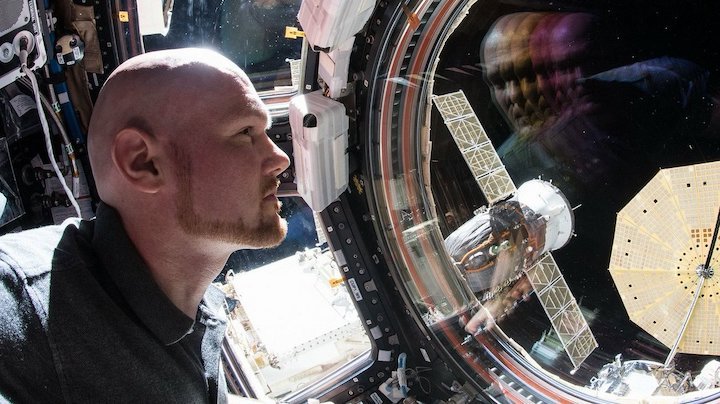 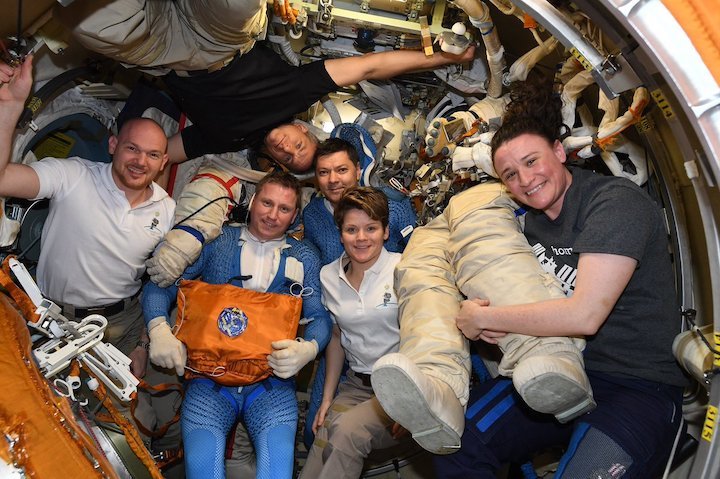 AN ASTRONAUT RETURNS TO EARTH

ESA astronaut Alexander Gerst will return to Earth alongside NASA astronaut Serena Auñón-Chancellor and Russian cosmonaut Sergei Prokopiev on 20 December. After more than six months living and working on the International Space Station, their Soyuz is expected to touch down in Kazakhstan at around 05:06 GMT (06:06 CET).

The trio’s journey from the Space Station to Earth will take approximately three hours, during which the speed of their Soyuz capsule will reduce from 28 000 to 0 km/h. Alexander upon return from his Blue Dot mission in 2014

It will be a bumpy ride as they reenter the atmosphere and jettison parts of their spacecraft. Parachutes will deploy and retrorockets will fire an instant before touchdown to slow the capsule for a dramatic but safe landing.

Once the Soyuz lands, ground teams from Russia, ESA and NASA will help the astronauts out of their capsule and into chairs. From there, ESA flight surgeons and crew support teams will step in to take good care of Alexander’s health, comfort and safety as he his flies back to Cologne, Germany.

From Kazakhstan to Cologne Once Alexander has passed medical checks, he will be helicoptered to Karaganda, Kazakhstan, where he will take part in a traditional welcoming ceremony alongside Serena and Sergei before boarding a NASA plane to Norway with Serena while Sergei heads to Star City near Moscow, Russia.

Alexander will say farewell to Serena in Norway as he is transferred to an awaiting ESA plane. This marks the final leg of Alexander’s journey to Cologne.

ESA flight surgeon Sergi Vaquer says there are a number of medical considerations when returning an astronaut to Earth. These include cardiovascular issues, weakened bones, muscle loss, and vestibular disturbances which can cause a loss of balance and feelings of nausea. An astronaut’s immune system may also be compromised, so it is important to follow strict hygiene procedures and avoid contact with anyone who may be unwell.

In spite of this, Sergi says ESA astronauts come back in good health and he expects Alexander to readapt quickly to life on Earth.

“I believe the reason our astronauts are in such good shape when they return is because they prepare so intensely before their mission, but also thanks to the physical exercise programme they undergo while in orbit,” Sergi says. “Exercise is a key medical countermeasure and ESA’s specialists play a vital role in helping the astronaut reduce many negative effects of spaceflight.” Upon his return, Alexander will undertake a minimum 21 days of rehabilitation under the care of ESA doctors and exercise specialists, supported by facilities at the German Aerospace Centre’s state-of-the-art ‘:envihab’ facility, next to ESA’s astronaut centre.

He will also continue to provide data for researchers as he completes ground-based sessions of experiments performed on the Station.

ESA project manager of Alexander’s return to Europe Stephane Ghiste says this demonstrates the way in which many different teams work together to ensure an astronaut's safe return.

“These kinds of operations are only possible thanks to the cooperation and dedication of several ESA teams including space medicine, crew support, training, communication and the EAC office in Star City, Moscow, as well as close collaboration with our external partners NASA, Roscosmos and German Aerospace Centre – DLR,” he adds. 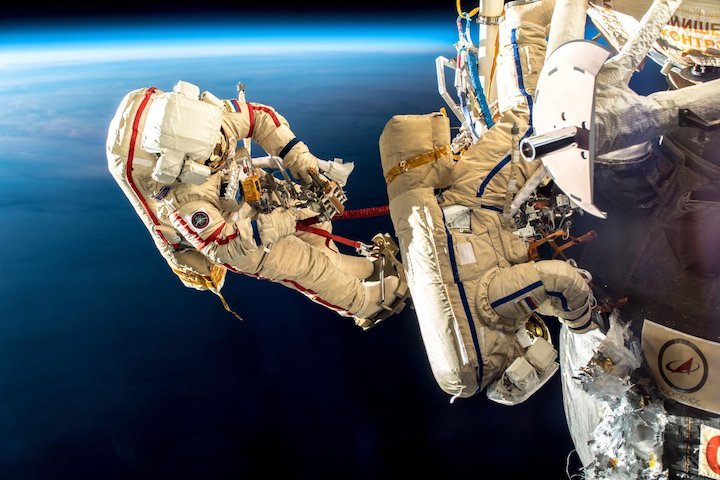 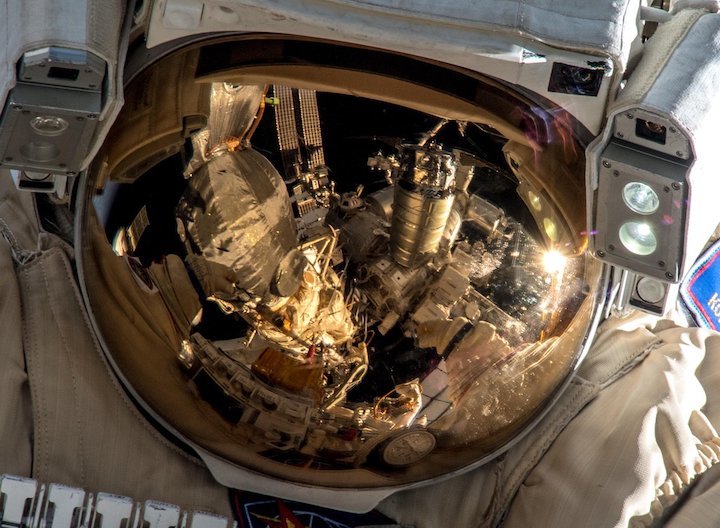 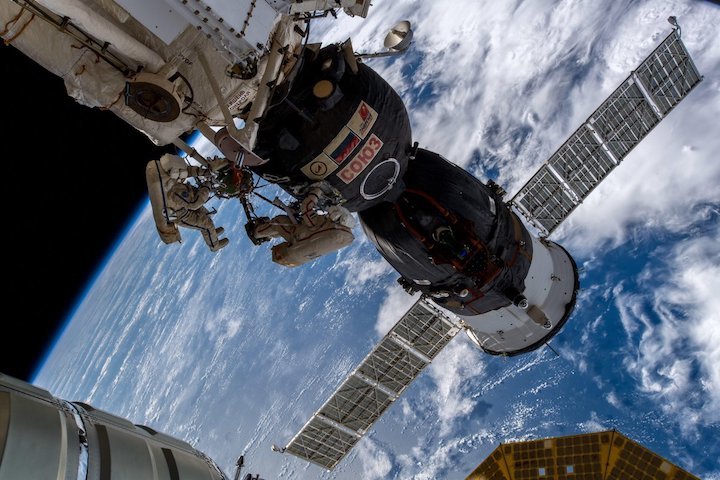 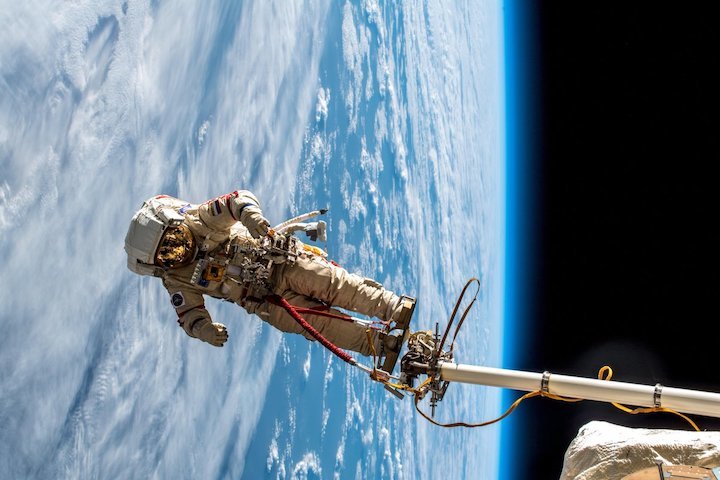