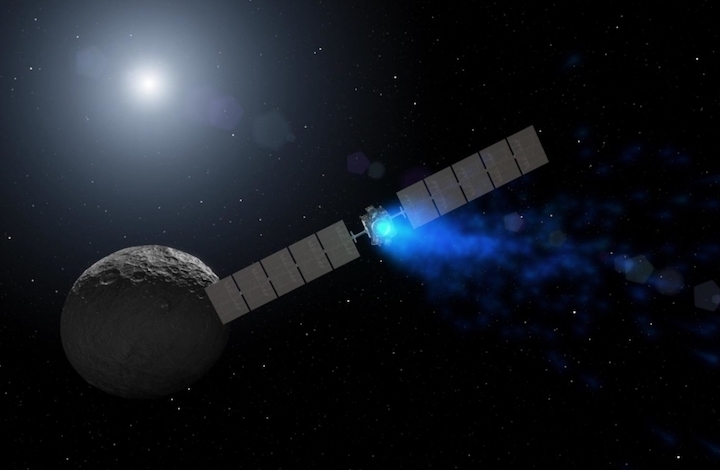 As another spacecraft prepares to land on Mars, the Dawn spacecraft recently ended its mission to explore two of the largest worlds in the asteroid belt and it has succeeded well beyond expectations, starting a new era in the exploration of the Solar System’s small worlds.
As the age of robotic planetary exploration began, as early as 1964, mission plans were drawn up to explore the main asteroid belt between Mars and Jupiter, to characterize these worlds which are regarded as leftovers from the formation of the Solar System. These “leftovers” promise to answer many questions about how the Solar System and its worlds, including Earth, formed, and possibly even how Earth came to bear life.

The Pioneer 10 and 11 spacecraft passed through the asteroid belt on their way to Jupiter and demonstrated that space probes could navigate safely through the belt even though thousands of small, rocky worlds were orbiting in the belt. After the Voyager probes passed through the asteroid belt, the Comet Rendezvous and Asteroid Flyby (CRAF) probe was planned to fly by asteroids and explore a comet before it was canceled in 1992 due to budget cuts. 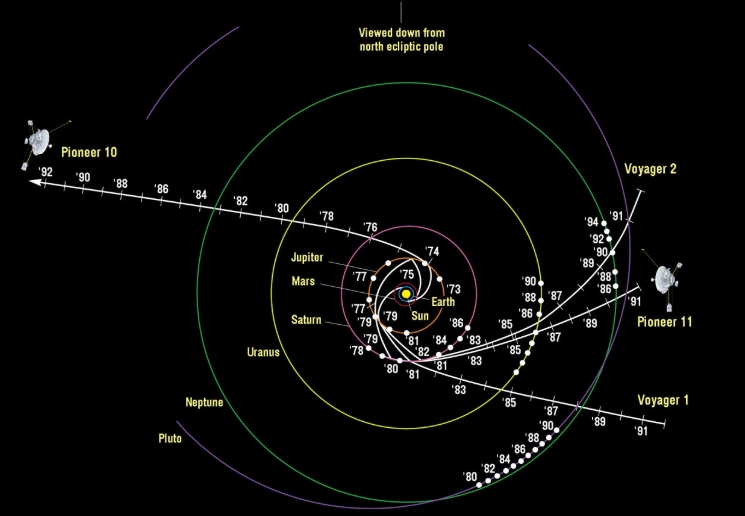 The two Pioneer spacecraft – via NASA

In the meantime, several comet flybys occurred, including flybys by Comet Giacobini-Zinner in 1985 and Comet Halley in 1986, as probes began to explore the smaller worlds of the solar system. On October 29, 1991, the Galileo probe made the first ever spacecraft flyby of an asteroid, flying past 951 Gaspra and returning pictures and data of this main-belt asteroid while on its way to Jupiter. On August 28, 1993, Galileo flew by asteroid 243 Ida and discovered that Ida had its own moon, which is now called Dactyl.

After Galileo’s asteroid flybys, a new era of “better, faster, cheaper” probes was launched at NASA and missions such as NEAR-Shoemaker, Deep Space One, and Stardust flew by asteroids and gathered data. NEAR-Shoemaker orbited 433 Eros for three years before making a successful soft landing on the asteroid, a landing that had not been planned while the mission was being designed. The European Space Agency, Japan’s JAXA, and the Chinese later followed with their own asteroid flybys, either as standalone missions or as targets of opportunity on their way to other destinations.

The Deep Space One probe launched in October 1998 was a key step toward future asteroid probes, including a ground-breaking proposal that would be considered in the next Discovery mission proposal review, as it was the first operational interplanetary use of an ion engine, auto-navigation, new solar array technology, and other new developments.

The ion engine, in particular, would be necessary for the success of a mission proposal to orbit two large asteroids that was being developed. The engine was powered by xenon gas ionized by an electrical field and had a very small thrust, but could thrust continuously for days, weeks, months, years on end, and could be stopped and restarted, thus enabling missions that would not be possible with the rocket engines previously used in planetary missions.

The Dawn mission to orbit the two largest, most massive “proto-planets” in the Solar System, 1 Ceres and 4 Vesta, was submitted as a Discovery mission proposal and was approved in December 2001 along with the Kepler exoplanet survey mission. 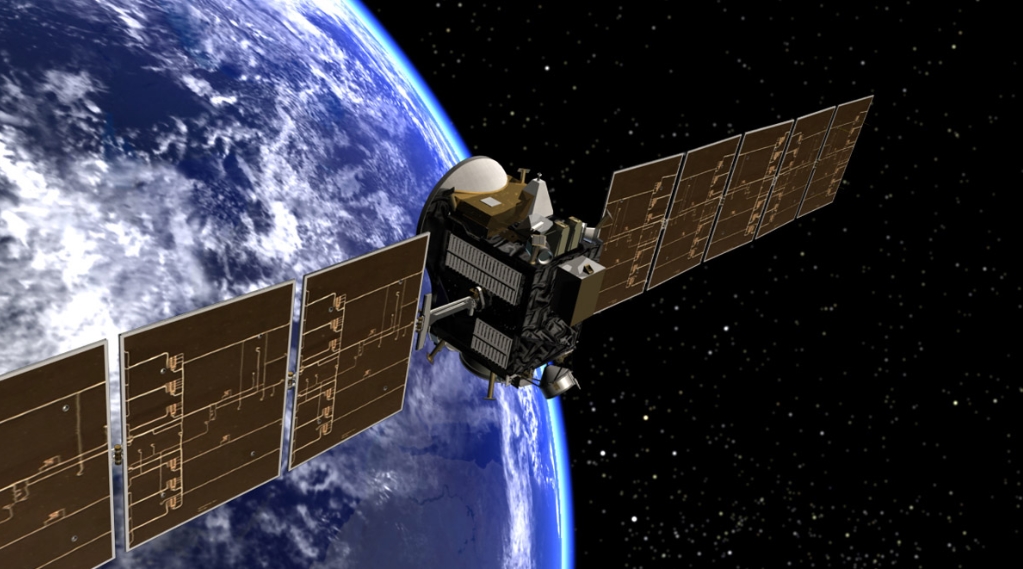 Dawn was equipped with three instruments for its science mission (two others were cut due to budgetary reasons). The first of these, the Framing Camera, developed in Germany by the German Aerospace Center and the Max Planck Institute, was the craft’s main science and navigation camera, so it was actually made up of two separate camera systems. The camera had a 20 mm aperture, a 1024 x 1024 CCD, an 8 position filter wheel (imaging wavelengths from 400 nm UV to 1050 nm near infrared), and took navigation and science images of Ceres and Vesta.

The second instrument, the Visible and Infrared Spectrometer (VIR) was based on the Rosetta and Venus Express VIRTIS spectrometer and was developed by the Italian Space Agency. The VIR can determine surface mineral composition and also detect water-bearing minerals, and operates at a range of 250 nm to 5 micrometers.

The third instrument, the Gamma Ray and Neutron Detector (GRaND) was developed at Los Alamos and can measure elemental composition of asteroids, including any ices that would be present. 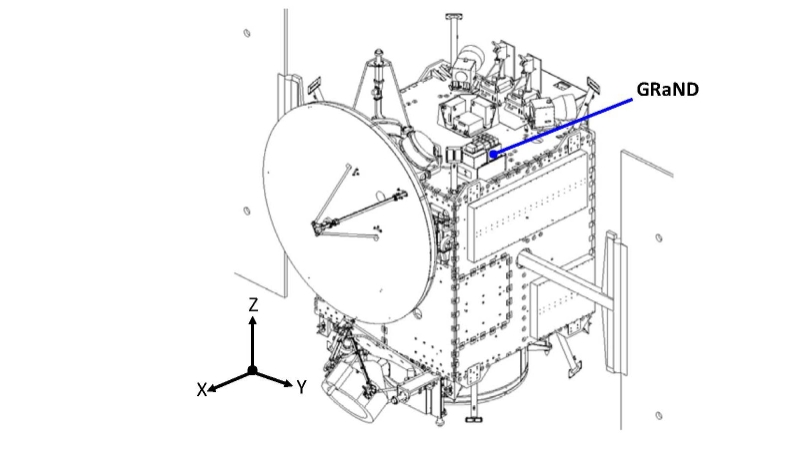 During launch preparations, Dawn was also equipped with a microchip containing the names of more than 360,000 space enthusiasts which had put their names onto a NASA web site as part of an outreach effort. This chip is underneath the high-gain antenna and is still on the spacecraft orbiting Ceres for at least twenty years after its end of mission. NASA has continued this practice with other solar system missions up to the present day.

Dawn had a bumpy path to the launch pad, being canceled twice before being revived, being delayed from its original launch date in 2006, and suffering launch postponements in the summer of 2007 due to various issues with weather and part deliveries. These postponements even extended to the launch day itself due to an errant ship entering the “keep-out” zone near the launch pad and a subsequent collision-avoidance window to avoid other spacecraft or space debris.

On September 27, 2007, at 7:34 am Eastern Daylight Time, the Dawn probe launched successfully from Cape Canaveral Air Force Station aboard a Delta II launch vehicle and achieved escape velocity from Earth, after which Dawn started its ion engine to continue on its path to Vesta, via a flyby of Mars some 17 months after launch. This flyby of Mars would enable Dawn to save fuel so that it could perform its mission without having to use a larger rocket to lift off from Earth.

Despite going into safe mode during the day due to a programming error, Dawn successfully flew by Mars on February 17, 2009, to gain speed and to put the probe on its trajectory toward Vesta, and the probe arrived at the 329 mile (530 km) diameter world in the summer of 2011 after traveling 1.7 billion miles.

Dawn imaged Vesta at a high resolution and discovered “grooves” in the surface near the equator that were caused by two giant impacts in the south polar region. The first of these impacts created the Veneneia crater, and the next, larger, impact formed the Rheasilvia crater which covered over part of Veneneia.

This impact not only nearly destroyed Vesta and sprayed ejecta all over the asteroid, it was responsible for sending samples of Vesta to Earth and other places in the Solar System, as HED meteorites (howardites, eucrites, and diogenites), meteorites that are confirmed now to match the composition of Vesta’s surface.

These meteorites have different compositions and suggest that Vesta is differentiated into a core and mantle similar to planets like Earth and Mars. (Eucrites are more like a planetary crust, while diogenites are more mantle like and howardites are a combination).

In many respects, Vesta turns out to be much more like a planet than a typical asteroid, with active geological features like landslides as well as a differentiated composition. The HED meteorite link to Vesta and the increased density in the center of Vesta (a feature of differentiated worlds like Earth) were confirmed by Dawn gravity and spectral data. 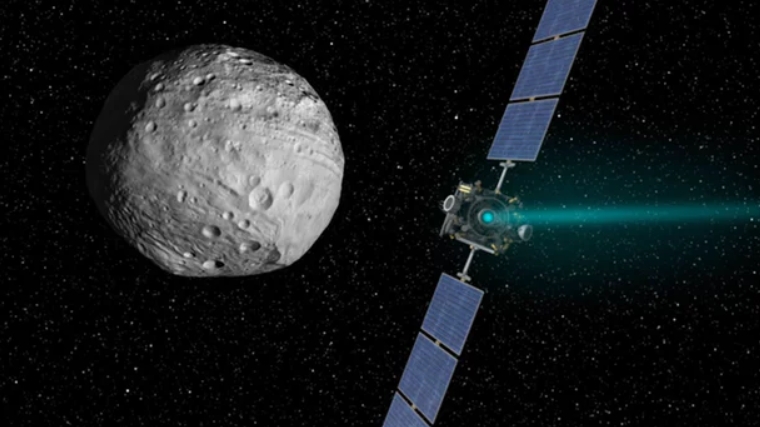 Vesta was found by Dawn to have dark spots on its surface that appear to be carbonaceous in composition and are thought to not be native to Vesta but brought to Vesta by impactors from other parts of the Solar System, and later blasted as ejecta to other parts of Vesta by the Rheasilvia impact.

The Rheasilvia impact also created one of the largest mountains in the Solar System, which is 14 miles (73,920 feet, or 22 km) high and 120 miles (200 km) wide. In addition, gullies have been discovered on Vesta that could have been formed by temporary liquid water flows after impacts.

After a successful exploration of Vesta, Dawn was scheduled to break orbit and start its journey to Ceres on August 26, 2012, but a reaction wheel issue caused a delay in departure while the issue was analyzed. On September 5th, the departure was successfully executed and Dawn was on its way to explore a second world in the asteroid belt. The way to Ceres was not completely smooth due to a safe mode event in September 2014 when the ion engine briefly shut down. Backup systems were activated and the mission resumed its journey to Ceres.

After a 30 month, 930 million mile journey, Dawn arrived at Ceres on March 6, 2015, becoming the first probe to arrive at a dwarf planet. Ceres, a world with a diameter of 588 miles (946 km), had been promoted from asteroid to dwarf planet status as a result of the IAU’s 2006 definition of planethood, the same decision that demoted Pluto from planetary status to the new “plutoid” dwarf planet status. Dwarf planets are those worlds that have sufficient gravity and mass to become round but that don’t clear their orbit.

Dawn began imaging Ceres during the RC3 (Rotation Characterization 3) phase from April to June 2015 and entered a survey orbit afterward. After successfully dealing with a safe mode event brought on by an engine gimbal system glitch, Dawn moved into high and low altitude mapping orbits and 7 XMO (Extended Mission Orbit) phases which ended with Dawn orbiting just 22 miles above the surface before the mission ended.

During 2003 and 2004 the Hubble Space Telescope imaged Ceres and found a very bright spot on its surface, one that was very intriguing. Dawn imaged this spot and found that it was a crater with very bright spots (known as faculae) of highly reflective salts, a crater now known as Occator Crater.

Further analysis found that Ceres is still geologically active, and Occator Crater in particular was found to have sodium carbonate, a marker of hydrothermal activity. 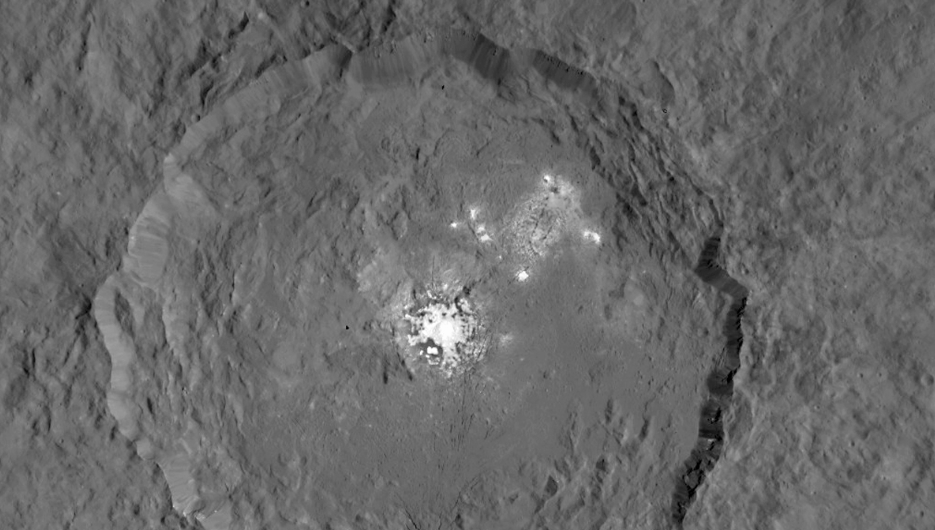 Dawn beams back images of Ceres – via NASA

Ceres, like Vesta, is a differentiated world with a water-rich crust, a mantle, and a core, making it far more planet-like than most bodies in the asteroid belt. Ceres also contains young terrains as well as older terrains, and Occator Crater is not the only place on this world with salt deposits or hydrothermal activity, as there are a number of deposits scattered throughout Ceres.

There is a great deal of water ice at higher latitudes and hydrated salts plus clathrates (rocks where water molecules form a “cage” that traps gas molecules within), and Dawn also found one crater that had a permanently shadowed area with water ice, similar to craters on the Moon and Mercury. It is also believed that Ceres (or the materials that made it) came from the outer part of the Solar System due to the discovery of ammonia on the world. This is an indication that the Solar System was possibly reshuffled one or more times before its current configuration.

By 2016, the mission had finished gathering the required scientific data of Ceres and was into an extended mission to gather further data. A flyby of asteroid 2 Pallas was considered but it was ultimately decided that a greater scientific return could be obtained by staying at Ceres. Dawn continued gathering data and taking spectacular close-up pictures of targets on Ceres until late October 2018, when communication was lost with the spacecraft.

On November 1, 2018, the Dawn spacecraft ended its intrepid, history-making mission as it ran out of fuel while orbiting Ceres. Though the mission is now ended, new discoveries will still be made from the data it returned for years to come, and the discoveries will no doubt inform future missions to these worlds and others like them.