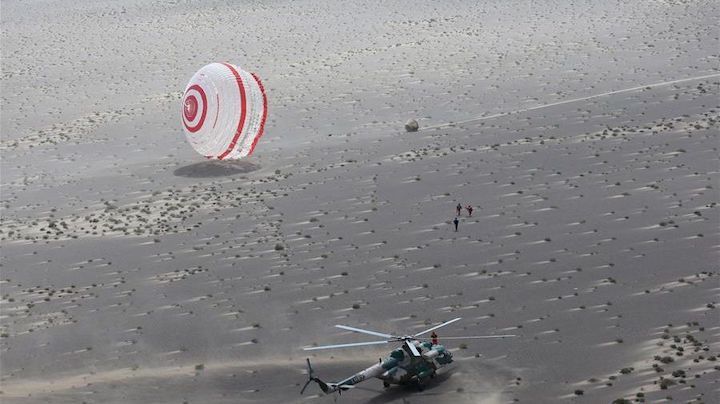 A scaled return capsule for a new generation of crewed spacecraft, recovered in Inner Mongolia on June 26, 2016, following first flight of the Long March 7 rocket. Xinhua

China has announced progress in testing landing systems for a new generation of spacecraft for human spaceflight, Chinese media report.

The tests verified recovery technology for the crew and reentry module for the new generation spacecraft, namely new parachute systems and an airbag landing system.

The development and testing of the systems has been carried out by the Beijing Institute of Space Mechanics and Electronics (BISME), also known as the 508th institute of the China Academy of Space Technology (CAST), China’s main body for researching, developing and manufacturing spacecraft.

A helicopter was used to drop a 7-metric-tonne model spacecraft in order to test the systems, according to the Chinese language Science and Technology Daily, which also states that this makes the capabilities similar to that of NASA's Orion spacecraft.

China's current crewed spacecraft, Shenzhou, has a mass of around 7.8 metric tonnes, with the reentry module at around 3.2 tonnes. It uses solid-fuelled retro-propulsion to assist landing.

China Daily states that tests prompted researchers to state that they achieved breakthroughs in the structure design and the active exhaust control technologies to maintain the spacecraft's stability in landing.

Earlier testing of the airbag landing system for a new generation crew spacecraft in May 2018. CAST

China is developing two versions of its next generation crewed spacecraft, with one with a mass of around 14 tonnes and another of 20 tonnes, for a range of low Earth orbit, lunar, deep space and potentially even interplanetary missions.

A scale version of the reentry module for the 14-tonne version was tested with the debut launch of the smaller Long March 7 rocket in 2016.

The full size 20-tonne version is due to have an uncrewed test flight on the first Long March 5B launch, currently scheduled for 2019, without environmental systems. The new spacecraft will be, apart from the heatshielding, reusable, according to CAST officials.

Model of the crew capsule for the next-generation crewed spacecraft on display at the Zhuhai Airshow in November 2018. CAST

CAST belongs to the China Aerospace Science and Technology Corporation (CASC), the main contractor for the Chinese space programme.

Another CASC subsidiary, the China Academy of Launch Vehicle Technology (CALT), is developing concepts for next generation of launch vehicle capable of sending the new crewed spacecraft into trans-lunar injection.

The Long March 2F, which debuted in 1999, only has the capability to loft the Shenzhou craft into low Earth orbit.

The three-module Shenzhou and the Long March 2F will be used for the early missions to the upcoming Chinese Space Station, but both could be replaced when the new launch vehicle and spacecraft enter service.

The Long March 5B and Long March 7 launch vehicles, debuted in 2016, will be capable of lifting the new generation crewed spacecraft into low Earth orbit.