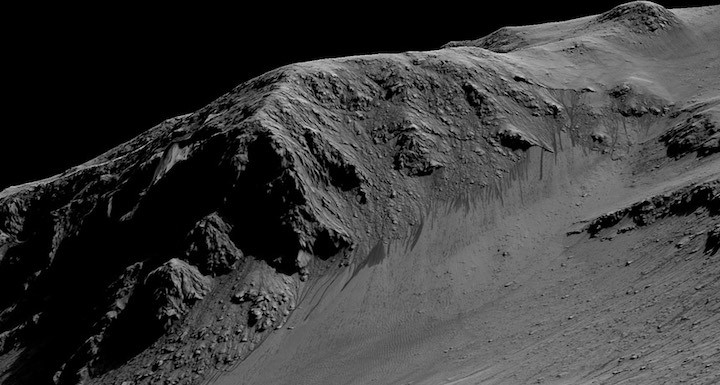 HIGH AND DRY  Ephemeral dark streaks on Martian craters, like the ones in this Mars Reconnaissance Orbiter image of Horowitz crater, were thought to be signs of salty water. A new analysis suggests they’re not.

Some signs of water on Mars may have just dried up.

Thanks to the way data from NASA’s Mars Reconnaissance Orbiter are handled, the spacecraft may be seeing signs of hydrated salts that aren’t really there, planetary scientists report online November 9 in Geophysical Research Letters.

That lack of salts could mean that certain sites proposed as places where life could exist on Mars today, including purported streaks of liquid water on the walls of Martian craters, are probably dry and lifeless.

“People think these environments might be inhabitable by microbes,” says planetary scientist Ellen Leask of Caltech. But “there might not actually be any real evidence for it,” at least not from orbit.

Leask and her colleagues found the problem while searching for hydrated salts called perchlorates in maps of Mars taken by the orbiter’s Compact Reconnaissance Imaging Spectrometer for Mars, or CRISM. Perchlorates can lower the freezing point of water by up to 80 degrees Celsius, which could be enough to melt ice in the frigid Martian climate.

Both the Phoenix Mars lander (SN: 4/11/09, p. 12) and the Curiosity rover have detected tiny amounts of perchlorates in Martian soil (SN Online: 9/26/13). “Finding perchlorate was a big deal, because it’s a way to really make liquid water on Mars,” says planetary scientist Bethany Ehlmann of Caltech.

NORTHERN BRINES NASA’s Phoenix Mars lander took this picture from its landing site near the planet’s north pole in 2008. The lander found signs of perchlorate salts in the soil, which could help water ice melt even at Mars’ frigid temperatures.

To see if the salts showed up in other locations on Mars, scientists turned to CRISM’s chemical maps, which show how light reflects off of the Martian surface in hundreds of wavelengths. The resulting spectra allow scientists to identify specific minerals on the surface based on the ways those minerals absorb or alter the light.

CRISM’s camera doesn’t work perfectly, though. It can be thrown off by boundaries between light and dark, like a shadowed region at the edge of a cliff. Some pixels in the orbiter’s camera take a fraction of a millisecond to realize the surface color changed, so they record an extra spot of light or dark where it shouldn’t be. Planetary scientists have software to correct for these “spikes” in the spectra and make the data more reliable and easier to read.

But the correction sometimes introduces dips in the spectra at the same wavelengths as perchlorates, Leask and Ehlmann and their colleagues found. “We cleverly created a way to get rid of the spiky noise,” Ehlmann says. “But for 0.05 percent of the pixels, it smooths out in a way that looks like perchlorate.”

The researchers found the glitch while looking for small signs of the salts in CRISM images. Assuming that the orbiter would have already spotted large deposits of perchlorates if they existed, the team wrote an algorithm to find smaller traces that covered fewer than 10 pixels in a CRISM image. And the scientists started seeing perchlorates everywhere, including Jezero crater, which NASA announced was selected as the landing site for the Mars 2020 rover on November 19 (SN Online: 11/19/18).

“We were like, oh my gosh!” Ehlmann says. If Mars 2020 lands near a potentially habitable environment, the rover team would have to sterilize the spacecraft more stringently, to avoid accidentally poisoning the water with Earth microbes (SN: 1/20/18, p. 22). “You don’t want to send your dirty spacecraft and kill all the Mars life.”

But on closer inspection, Leask and her colleagues noticed that perchlorates seemed to be showing up in places where it made no geologic sense for the salts to form — and especially along the boundaries between light and dark surfaces. That made the team suspect that the spike-smoothing strategy might be introducing an error.

For months, Leask painstakingly examined every perchlorate pixel in the raw data, before the spike-removing correction had been applied. “We knew instantly that some of [the signs] were not real,” she says. It turned out that none of them were.

“I think [Leask] is definitely onto something here,” says planetary scientist Jennifer Hanley of the Lowell Observatory in Flagstaff, Ariz., who was a coauthor on the 2015 study but was not involved in the new work. Looking at the processed data and the raw data together, the perchlorate feature “does seem to kind of disappear, which is concerning.”

That doesn’t necessarily mean the perchlorates aren’t there, though, she says — they may just be harder to recognize. Hanley and her colleagues are working on a more reliable way to identify similar salts on Mars based on several lines of evidence, not just a single line in the spectrum.

“We definitely know that these salts are on the surface of Mars,” Hanley says. “They could still be important for habitability. But we have to be more cautious about detecting them.”