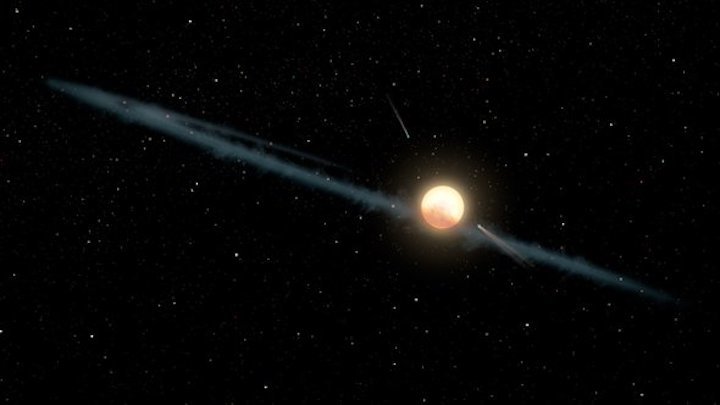 A faraway star in the southern sky is flickering in an odd manner that suggests a bizarre cloud of material—or something even stranger—is in orbit around it. Discovered by astronomers using a telescope in Chile, the star is reminiscent of two other enigmatic astrophysical objects, one thought to harbor a planet with rings 200 times larger than those of Saturn, the other most famous for the remote possibility it is encircled by “alien megastructures.” The newfound star may help shed some light on one or both of these puzzling objects.

In 2010, the Vista Variables in the Via Lactea (VVV) survey began its project of creating a three-dimensional map of variable stars in the vicinity of the Milky Way’s center. As part of the project, astronomer Roberto Saito of the Federal University of Santa Catarina scoured the telescope’s data for eruptive outbursts from the hundreds of millions of monitored stars. But the most notable thing he found was not an outburst at all—it was a star that grew mysteriously dim over several days in 2012. He and his colleagues reported their findings in a recently published paper in the Monthly Notices of the Royal Astronomical Society.

Known as VVV-WIT-07, the star appears to be much older and redder than our sun, although the amount of interstellar dust between our solar system and the star’s home closer to the galactic center makes exact classification and distance measurements very difficult. What is certain is that in the summer of 2012, the object's brightness faded slightly for 11 days, then plummeted over the following 48 days, suggesting that something blocked more than three quarters of the star’s light streaming toward Earth. But what could that “something” be?

According to Eric Mamajek, an astrophysicist at the University of Rochester unaffiliated with the VVV survey, such a profound degree of dimming suggests that a staggeringly large object or group of objects is blocking the light. “It's got to be over a million kilometers wide, and very dense to be able to block that much starlight,” he says. Mamajek should know: He led the team that discovered J1407, another strange star periodically eclipsed by a planet-sized object thought to boast a massive ring system some 200 times broader than that of Saturn. In this latest case, he says, the strange signals from VVV-WIT-07 could arise from clumps or clouds of material passing between Earth and the star, though he cautioned that the data were preliminary and more observations are required.

Tabetha Boyajian agrees. Boyajian, an astronomer at Louisiana State University, was the lead author for the 2015 paper announcing the strange dimming of KIC 8462852, also known as Tabby's Star, an unusual object first spotted by NASA's Kepler Space Telescope. VVV-WIT-07 would have to harbor “a very peculiar kind of dust cloud to make these kinds of dips,” Boyajian says. Boyajian’s study helped spark a surge of public interest in Tabby’s Star because the star’s unusual dimming could be seen as evidence of an alien civilization building an artificial structure that soaked up the star’s light. More conventional explanations include a swarm of comets or fragments from a shattered planet, both of which would create significant clouds of dust and debris that could also occlude the star’s light. But, so far, no simple single explanation fits the complexities of the dimming seen around the star; researchers remain stymied in their attempts to understand the true nature of the strange dimming of Tabby’s Star.

Astronomers track such dips by plotting the intensity of a star’s light over time, a figure known as a “light curve.” The light curve of J1407 shows its massive rings can occasionally block as much as about 95 percent of the star’s light, while the light curve of Tabby's Star suggests that whatever orbits there only occludes about 20 percent of that star’s luminous emission. That makes VVV-WIT-07 an intermediate case, Saito says. “Our object is similar in the sense that we are also trying to explain the behavior in the light curve based on material surrounding the star,” he says.

Based on their data, including follow-up observations made in 2016, Saito and his colleagues speculate that the star may continue to flicker into 2019, potentially displaying four additional dimming events throughout the year as the mysterious light-blocking material continues its orbit around the star. If those predictions are borne out, they could prove key to unlocking not only the mysteries behind VVV-WIT-07 but also those surrounding Tabby’s Star.

“Having a sample of two, we can have two stars to study instead of one to try to unify a theory of whatever is going on,” Boyajian says. If both stellar dimmings are caused by the same natural process, it makes it less likely that something unusual is happening—like supersized cosmic construction projects.

There is hope that more of these peculiar flickering stars may show up in the near future. Saito says that it is possible the VVV survey could discover more, even though it is not optimized for identifying such systems. The Large Synoptic Survey Telescope (LSST), an 8.4-meter instrument under construction in Chile, could up turn up more members of the odd collection when it begins operations in the 2020s.

“I think we’re going to start finding more objects like this in the LSST era,” Mamajek says. “We’re probably going to start discovering weird variable [stars] that have not been seen before.”

For now, Saito and his colleagues plan to continue observing VVV-WIT-07 with infrared instruments on the ESO's New Technology Telescope and the National Optical Astronomy Observatory's Southern Astrophysical Research Telescope, both of which contributed to the team’s 2016 observations. The star’s intrinsic faintness—as well as the attenuation of its light across vast galactic distances—means that it is best observed at near-infrared wavelengths where interference from interstellar dust is minimal. Although the VVV Survey concluded last year, an extended survey is still observing the galactic center and may turn up other eclipses missed in the initial observations.

Hopefully these observations will shed some light on what is causing the bizarre dimming of VVV-WIT-07. “This is certainly not a common phenomenon,” Mamajek says. “I can't wait to see the future results.”
Quelle: Scientifc American
Astronomie - Have Astronomers Found Another "Alien Megastructure" Star?
« Zum vorherigen Eintrag Zum nächsten Eintrag »
2442 Views
Created with page4