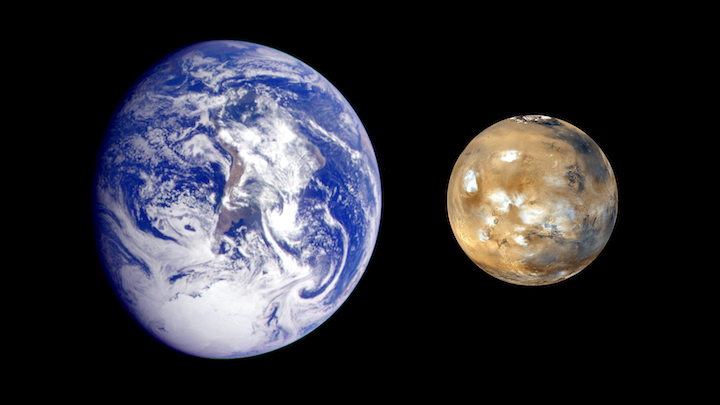 This composite image of Earth and Mars was created to allow viewers to gain a better understanding of the relative sizes of the two planets. Image credit: NASA/JPL-Caltech

Mars and Earth are like two siblings who have grown apart.

There was a time when their resemblance was uncanny: Both were warm, wet and shrouded in thick atmospheres. But 3 or 4 billion years ago, these two worlds took different paths.

We may soon know why they went their separate ways. NASA's InSight spacecraft will arrive at the Red Planet on Monday, Nov. 26, and will allow scientists to compare Earth to its rusty sibling like never before.

InSight (short for Interior Exploration using Seismic Investigations, Geodesy and Heat Transport) won't be looking for life on Mars. But studying its insides - what it's made of, how that material is layered and how much heat seeps out of it - could help scientists better understand how a planet's starting materials make it more or less likely to support life.

"Earth and Mars were molded out of very similar stuff," said Bruce Banerdt, InSight's principal investigator at NASA's Jet Propulsion Laboratory in Pasadena, California, which leads the mission. "Why did the finished planets turn out so differently? Our measurements will help us turn back the clock and understand what produced a verdant Earth but a desolate Mars."

Serving Life on a Plate

Long ago, Mars stopped changing, while Earth continued to evolve.

Earth developed a kind of geological "conveyer belt" that Mars never had: tectonic plates. When they converge, they can push the crust into the planet. When they move apart, they enable new crust to emerge.

This churning of material brings more than just rock to the surface. Some of life's most vital ingredients are so-called volatiles, which include water, carbon dioxide and methane. Because they change into gas easily (that's what makes them volatile), they can be released by tectonic action.

The fact that Mars doesn't have tectonic plates suggests its crust was never recycled back into the planet's interior. Could the appearance of life depend on whether tectonic plates are present to churn up volatiles?

"One of our key questions regarding habitability is, what are the key conditions planets need for life to form?" said Sue Smrekar, InSight's deputy principal investigator at JPL. "Understanding a planet's initial building blocks set the stage for how processes that affect the environment evolve over time."

InSight could help answer these questions by using a seismometer, called Seismic Experiment for Interior Structure (SEIS), to watch how quakes - which can be caused by processes other than just tectonic action - travel through Mars. Understanding how the planet is layered will help scientists work backward, piecing together how dust, metals and ices in the early solar system combined to form the Red Planet.

Every rocky planet traps a reserve of heat in its interior. Some is trapped when a planet forms; the rest comes from radioactive materials decaying over time. That heat then gradually wends its way to the surface, melting rock layers, fracturing crust and creating volcanoes that belch out volatile gases.

Heat is important for several reasons. It could have created hot springs early in Martian history, warming the subsurface from below. It could have spewed steam out of volcanoes that later condensed into streams and oceans.

Heat keeps a planet's core molten and flowing. Metallic elements in that core generate electric currents as they move, producing a magnetic field. That magnetic field is like invisible armor, shielding a planet - and any life-forms that may be on it - against radiation.

Mars once had a strong magnetic field; many of the oldest parts of the planet's crust are highly magnetized. But billions of years ago, most of this field disappeared, leaving Mars unprotected.

To better understand why Mars' magnetic field vanished, InSight's scientists want to learn more about the planet's core. Whether the core is liquid, solid or a combination of both affects how the planet wobbles on its axis, just like the liquid yolk inside a spinning, raw egg will result in a different wobble than the denser, solid yolk of a cooked egg.

A radio experiment, called Rotation and Structure Experiment (RISE), will help InSight's scientists measure Mars' wobble. Combined with data about the planet's layers and heat, the findings will make it possible to piece together how Mars lost its magnetic field.

Mars' wobble, tectonic activity and heat flow - all three can help explain what set these planetary siblings on different roads, only one of which provides much better conditions for life today.

"Mars is a laboratory for how all these processes happen early in a planet's formation," Smrekar said. "InSight will help constrain our models of how planets are made and change over time."

A number of European partners, including France's Centre National d'Études Spatiales (CNES) and the German Aerospace Center (DLR), are supporting the InSight mission. CNES provided the Seismic Experiment for Interior Structure (SEIS) instrument, with significant contributions from the Max Planck Institute for Solar System Research (MPS) in Germany, the Swiss Institute of Technology (ETH) in Switzerland, Imperial College and Oxford University in the United Kingdom, and JPL. DLR provided the Heat Flow and Physical Properties Package (HP3) instrument, with significant contributions from the Space Research Center (CBK) of the Polish Academy of Sciences and Astronika in Poland. Spain's Centro de Astrobiología (CAB) supplied the wind sensors.