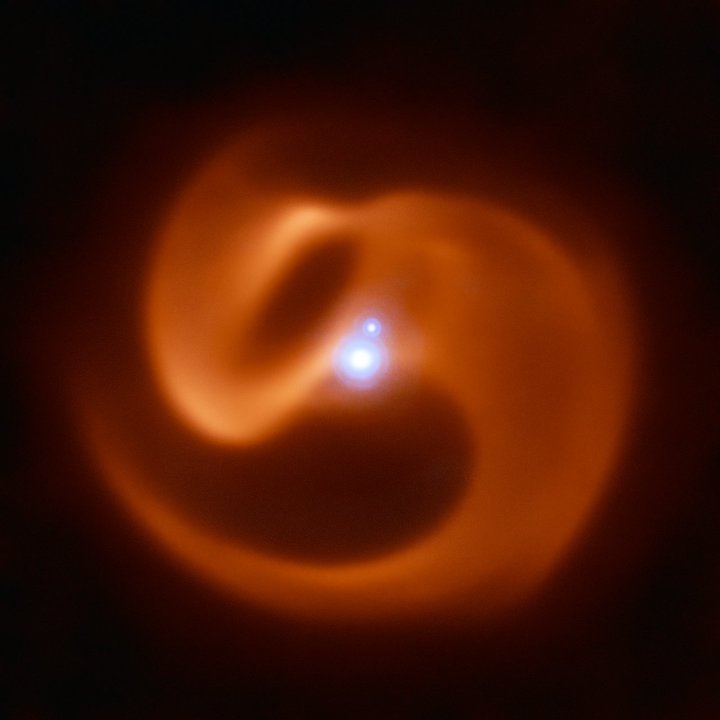 The VISIR instrument on ESO’s Very Large Telescope has captured this stunning image of a newly discovered massive triple star system. Nicknamed Apep after an ancient Egyptian deity, this may be the first ever gamma-ray burst progenitor found.

This serpentine swirl, captured by the VISIR instrument on ESO’s Very Large Telescope (VLT), has an explosive future ahead of it; it is a Wolf-Rayet star system, and a likely source of one of the most energetic phenomena in the Universe — a long-duration gamma-ray burst (GRB).

“This is the first such system to be discovered in our own galaxy,” explains Joseph Callingham of the Netherlands Institute for Radio Astronomy (ASTRON), lead author of the study reporting this system. “We never expected to find such a system in our own backyard” [1].

The system, which comprises a nest of massive stars surrounded by a “pinwheel” of dust, is  officially known only by unwieldy catalogue references like 2XMM J160050.7-514245. However, the astronomers chose to give this fascinating object a catchier moniker — “Apep”.

Apep got its nickname for its sinuous shape, reminiscent of a snake coiled around the central stars. Its namesake was an ancient Egyptian deity, a gargantuan serpent embodying chaos — fitting for such a violent system. It was believed that Ra, the Sun god, would battle with Apep every night; prayer and worship ensured Ra’s victory and the return of the Sun.

GRBs are among the most powerful explosions in the Universe. Lasting between a few thousandths of a second and a few hours, they can release as much energy as the Sun will output over its entire lifetime. Long-duration GRBs — those which last for longer than 2 seconds — are believed to be caused by the supernova explosions of rapidly-rotating Wolf-Rayet stars.

Some of the most massive stars evolve into Wolf-Rayet stars towards the end of their lives. This stage is short-lived, and Wolf-Rayets survive in this state for only a few hundred thousand years — the blink of an eye in cosmological terms. In that time, they throw out huge amounts of material in the form of a powerful stellar wind, hurling matter outwards at millions of kilometres per hour; Apep’s stellar winds were measured to travel at an astonishing 12 million km/h.

These stellar winds have created the elaborate plumes surrounding the triple star system — which consists of a binarystar system and a companion single star bound together by gravity. Though only two star-like objects are visible in the image, the lower source is in fact an unresolved binary Wolf-Rayet star. This binary is responsible for sculpting the serpentine swirls surrounding Apep, which are formed in the wake of the colliding stellar winds from the two Wolf-Rayet stars.

Compared to the extraordinary speed of Apep’s winds, the dust pinwheel itself swirls outwards at a leisurely pace, “crawling” along at less than 2 million km/h. The wild discrepancy between the speed of Apep’s rapid stellar winds and that of the unhurried dust pinwheel is thought to result from one of the stars in the binary launching both a fast and a slow wind — in different directions.

This would imply that the star is undergoing near-critical rotation — that is, rotating so fast that it is nearly ripping itself apart. A Wolf-Rayet star with such rapid rotation is believed to produce a long-duration GRB when its core collapses at the end of its life.

[1] Callingham, now at the Netherlands Institute for Radio Astronomy (ASTRON), did part of this research while at the University of Sydney working with research team leader Peter Tuthill. In addition to observations from ESO telescopes, the team also used the Anglo-Australian Telescope at Siding Spring Observatory, Australia.

A spectacular star system wrapped in an elegant spiral dust cloud has been discovered by astronomers. The system is believed to contain a star that is spinning extremely fast, which could produce one of the most powerful explosions in the Universe.

The binary star system, containing a pair of massive ‘Wolf-Rayet’ stars, has been discovered by an international team of researchers, including Professor Paul Crowther from the University of Sheffield, and published in Nature Astronomy.

Wolf-Rayet stars are amongst the hottest stars in the Universe, blast out powerful winds of hot gas, and represent the last stage in the evolution of the most massive stars prior to exploding as a supernova.

Located around 8,000 light years away – half a billion times further away than our Sun – the binary system is surrounded by a gigantic dust cloud. The collision between the winds of the two stars can form dust, which takes on elegant spiral pinwheel shapes as the stars orbit each other.

Using the Very Large Telescope (VLT) in Chile and the Anglo-Australian Telescope (AAT) in Australia, the team has found that the star system is producing incredibly fast winds, 100,000 times quicker than a hurricane on Earth. This wind speed is routine for Wolf-Rayet stars. However, the researchers discovered that the dust cloud is moving much slower.

The differing speeds of wind and dust suggest that the Wolf-Rayet stars are spewing out faster gas at the poles and slower gas at the equator, according to the study, which was led by Dr Joseph Callingham from the Netherlands Institute for Radio Astronomy.

Co-author Dr Benjamin Pope from New York University commented: “One way for such different winds to happen is via critical rotation.”

Critical rotation is needed in most supernova models for a star’s fiery death to be accompanied by the most energetic explosion in the Universe: a gamma-ray burst.

Professor Paul Crowther from the University of Sheffield’s Department of Physics and Astronomy, said: “It remains a mystery how dust - similar to soot from a candle - forms in such harsh environments, but this newly discovered system is the most beautiful case seen to date.”

Scientists at the University of Sheffield’s Department of Physics and Astronomy are conducting research to explore the fundamental laws of the Universe and developing pioneering technologies with real-world applications.

Sheffield researchers are looking beyond our planet to map out distant galaxies, tackling global challenges, such as energy security, and exploring opportunities presented by quantum computing and 2D materials.

Scientists at the University play a crucial role in major international collaborations, from the ATLAS project at CERN’s Large Hadron Collider and the LIGO collaboration behind the detection of gravitational waves, to neutrino detection as part of the T2K Collaboration in Japan and dark matter experiments with the LUK-Zeplin experiment at the Sanford Underground Research Facility.

Sheffield astrophysicists work closely with the teams behind NASA's Hubble Space Telescope and the Isaac Newton Group of Telescopes on La Palma in the Canary Islands, while biological physicists at the University are leading the Imagine: Imaging Life project – a major University of Sheffield research initiative that is applying revolutionary microscopy techniques to biology and medicine.

The University is also training the next generation of physicists through a range of three and four year undergraduate degrees in physics and astrophysics.