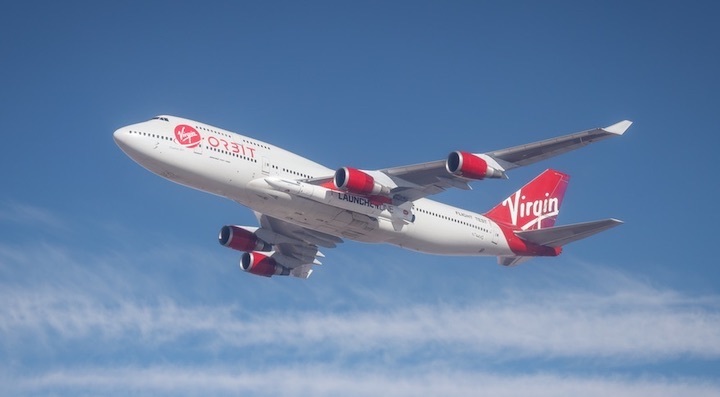 The company’s “Cosmic Girl” aircraft, a Boeing 747 with a pylon added to its left wing to which the LauncherOne rocket attaches, took off from the Southern California Logistics Airport in Victorville, California, shortly after 2 p.m. Eastern, according to flight tracking services. It landed back at the airport 80 minutes later after flying above the high desert region of Southern California, including passing over the Mojave Air and Space Port.

The flight tracking data didn’t specify if the plane was carrying a LauncherOne rocket, but one eyewitness posted video of the plane taking off from the Victorville airport with a rocket attached. A company spokesperson confirmed later Nov. 18 that this was a captive carry flight, the first for Virgin Orbit.

The test was “a picture-perfect flight, and a major step forward in our quest to bring a new capability to small satellite launch,” said Dan Hart, chief executive of Virgin Orbit, in a later statement. “There’s still important work to do, but I know our team and our customers were all thrilled to see us taking this important step forward.”

“The vehicles flew like a dream today,” said Virgin Orbit Chief Pilot Kelly Latimer in the statement. “Everyone on the flight crew and all of our colleagues on the ground were extremely happy with the data we saw from the instruments on-board the aircraft, in the pylon, and on the rocket itself. From my perspective in the cockpit, the vehicles handled incredibly well, and perfectly matched what we’ve trained for in the simulators.”

The company had been gearing up for the captive carry test in recent weeks. In late October it announced that it had mated a LauncherOne to the plane for the first time. The company last week posted videos of high-speed taxi tests, also performed in Victorville, where the plane and rocket traveled down a runway at speeds of up to 200 kilometers per hour, simulating an aborted takeoff.

During a captive carry flight, the rocket remains attached to the plane. Virgin Orbit said in a statement last month that “a number” of such captive carry flights are planned, “gathering terabytes of valuable data about aerodynamic performance, structural loading, and more.” That captive carry test program will culminate in a drop test, where the rocket is released in flight from the plane but does not ignite its engine, instead falling to the desert floor.

Barring any technical setbacks, the drop test will be the final step before the first orbital flight of LauncherOne. The company said last month it had already completed manufacturing of that rocket, with two “fully integrated” rocket stages undergoing static-fire tests in Mojave.

The company said in its statement about the captive carry flight that the first orbital flight was now projected to take place in early 2019, with “multiple trips to orbit in the year ahead.” In an interview with CNBC Oct. 9, Richard Branson, founder of the Virgin Group, said he expected the first orbital launch to take place in December or January. 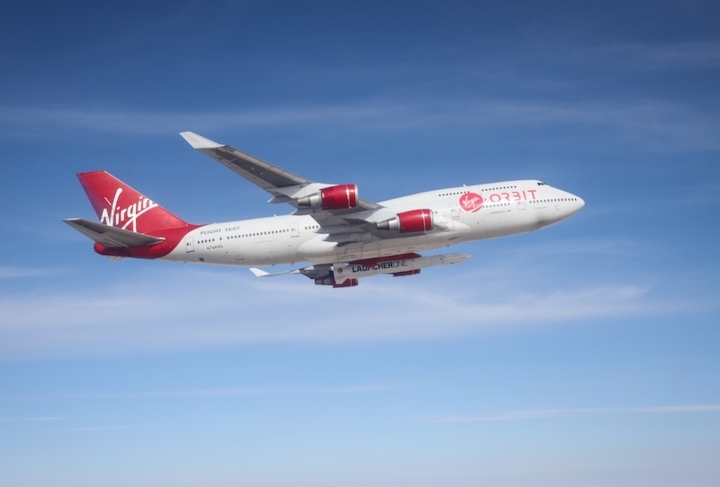 Virgin Orbit achieved another major milestone on Sunday, with LauncherOne taken on a captive carry test on Sunday. Carried under the wing of Cosmic Girl, a “flying launch pad” as described by the company, the duo enjoyed a successful first flight together, paving the way for the first launch that is set to take place in early 2019.

Cosmic Girl, a Boeing 747-400 (747-41R) series aircraft under then-registration number G-VWOW, undertook its first flight on 29 September 2001 and was delivered to Virgin Atlantic Airways on 31 October 2001.

Cosmic Girl – as she was named at the time of her delivery – spent 14 years in service with Virgin Atlantic Airways primarily servicing the company’s London to San Francisco via New York City route until 29 October 2015.

At this point, Cosmic Girl was withdrawn from service for Virgin Atlantic and flown from London Gatwick airport in the United Kingdom to San Antonio, Texas, in the United States.

The plane was officially delivered to Virgin Galactic on 12 November 2015 and re-registered as N744VG.

At Virgin Galactic’s San Antonio facility, the company completed a series of laser scans of the left side of the aircraft to acquire precise readings of the portion of the plane that will have to be modified to support the 24,947.58 kg (55,000 lb) LauncherOne rocket and its associated hardware. This was part of a process known as “maintenance D checks”. 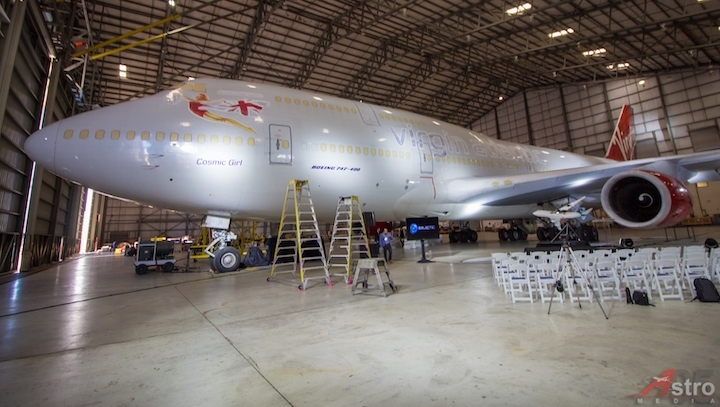 Once complete, Cosmic Girl was flown to California to undergo tests at Long Beach and Mojave. However, Sunday was the first time she flew with LauncherOne under her wing.

LauncherOne is powered by a single NewtonThree engine which will burn for about three minutes. NewtonThree has been optimized to take advantage of launching beneath an aircraft. 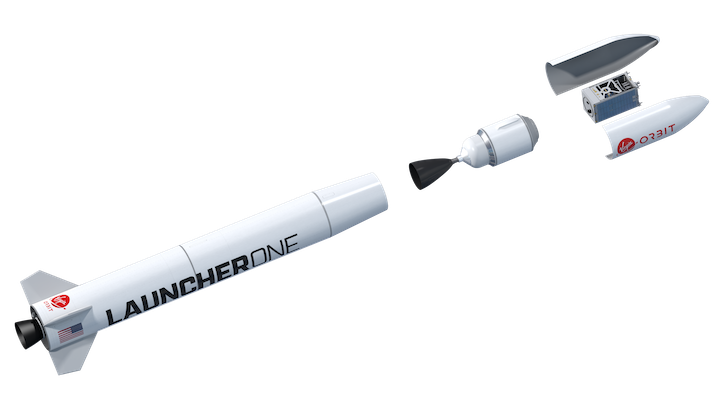 With missions beginning in 2019, the Captive Carry test was a major milestone to remaining on track.

On Sunday, Cosmic Girl and LauncherOne conducted a test flight from Victorville, California – a test facility close both to Virgin Orbit’s Long Beach factory and to one of its operational launch sites, the Mojave Air and Space Port.

The flight lasted 80 minutes in total, during which Virgin Orbit’s flight crew assessed the take-off, landing, and low-speed handling and performance of the integrated system. 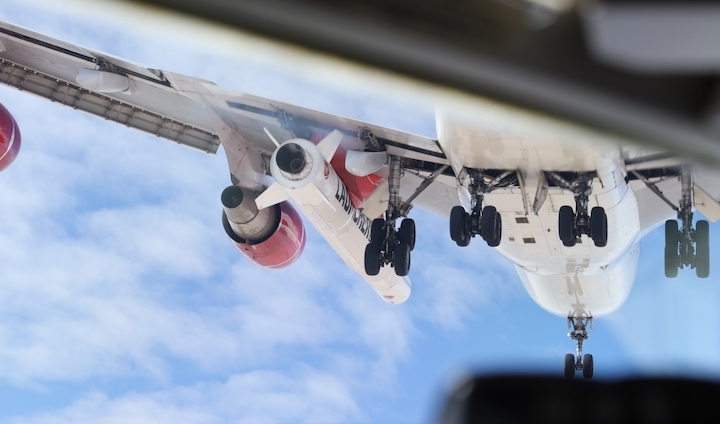 “The vehicles flew like a dream today,” said Virgin Orbit Chief Pilot Kelly Latimer (Lt. Col, US Air Force, Ret.). “Everyone on the flight crew and all of our colleagues on the ground were extremely happy with the data we saw from the instruments on-board the aircraft, in the pylon, and on the rocket itself. From my perspective in the cockpit, the vehicles handled incredibly well, and perfectly matched what we’ve trained for in the simulators.”

This captive carry test kick starts Virgin Orbit’s extensive test flight campaign, challenging the teams to conduct several more flights of its 747-400, some with a LauncherOne rocket attached and some without.

Future tests will focus on further proving out the robustness of the company’s modified 747, the carbon-fiber rocket itself, and the performance of the cutting-edge, lightweight avionics and flight computers onboard the rocket.

This portion of the extensive testing regime will conclude with a drop test, during which a rocket will be released from Cosmic Girl — without igniting — generating critical data about Cosmic Girl’s and the rocket’s performance as it freefalls through the atmosphere. 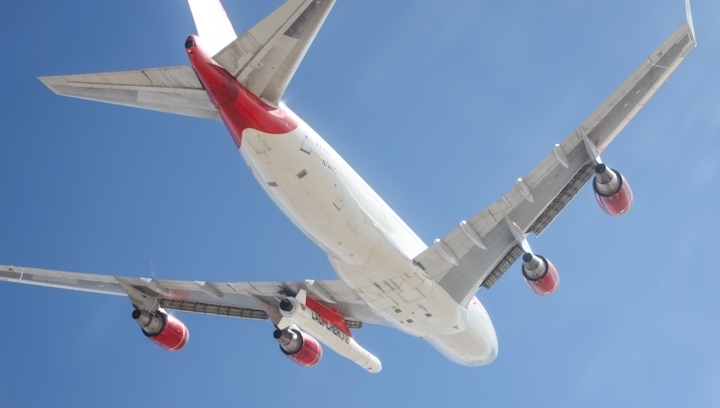 For now, Virgin Orbit can celebrate one further milestone along the path to operational flights.

CEO Dan Hart described as “a picture-perfect flight, and a major step forward in our quest to bring a new capability to small satellite launch.

“I’m extremely proud of Kelly, the flight crew, and all of our hard-working engineering and operations teams. Their professionalism really shone through today, with our rocket and our plane up in the skies on a beautiful California day. There’s still important work to do, but I know our team and our customers were all thrilled to see us taking this important step forward.”