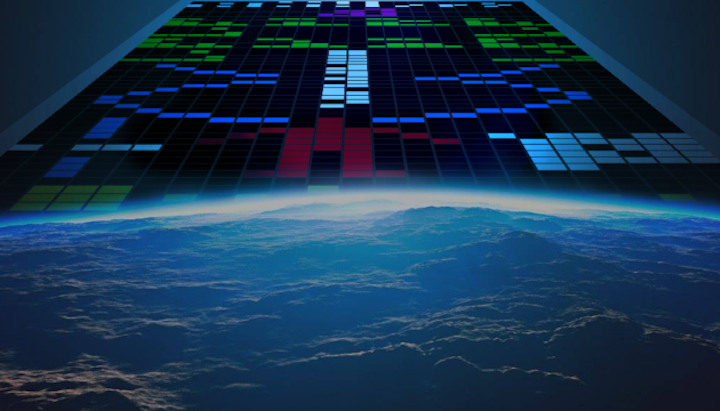 The Arecibo Observatory today kicked off a student-focused competition to design a new message to beam to extraterrestrials, 44 years to the day since the first deliberate message was sent out from Arecibo’s 1,000-foot-wide radio telescope.

“Our society and our technology have changed a lot since 1974,” Francisco Cordova, the observatory’s director, said in a news release. “So if we were assembling our message today, what would it say? What would it look like? What one would need to learn to be able to design the right updated message from the earthlings? Those are the questions we are posing to young people around the world through the New Arecibo Message – the global challenge.”

It’s not just about the message, however: Competitors will have to solve brain-teasing puzzles posted on Arecibo’s website in order to qualify, get instructions, register and submit their designs. Along the way, they’ll learn about space science, the scientific method and Arecibo’s story.

“We have quite a few surprises in store for participants, and we will be sharing more details as the competition progresses,” Cordova said.

The contest is open to teams from around the world, in classes ranging from kindergarten to college. Each team should consist of five students plus an adult mentor – for example, a teacher, professor or professional scientist. The first challenge will be posted on Dec. 16.

“Teams should wait until the release of the first challenge on December 16, since they will need to solve that challenge to be able to register,” Abel Méndez, director of the Planetary Habitability Laboratory at the University of Puerto Rico at Arecibo, told me in an email. “Meanwhile, team leaders should subscribe to the Arecibo newsletter for updates and start forming their own teams.”

Clues and follow-up activities will be rolled out periodically over the next year, and the winning team is due to be revealed next fall during a celebration of the Arecibo Message’s 45th anniversary.

That first Arecibo Message was designed by astronomer Frank Drake, a pioneer in the search for extraterrestrial intelligence or SETI, in league with other astronomers including Carl Sagan. The message took the form of a 1,679-bit radio transmission, sent out from the Arecibo telescope in the direction of the M13 star cluster in the constellation Hercules.

Those bits were meant to be put together into a 23-by-73-bit grid. The shapes shown on the grid represent a variety of concepts ranging from the numbers 1 through 10 to the chemical constituents of DNA, our solar system’s planets and the telescope itself … plus a stick figure that stands for humanity.

Since that transmission, the three minutes’ worth of radio waves have rippled out to a distance of 44 light-years, or less than 0.2 percent of the way to M13. Experts acknowledge that it’s extremely unlikely the message will ever be detected and decoded by an alien civilization.

“It was a purely symbolic event to show we could do it,” said astronomer Donald Campbell, a professor emeritus at Cornell University who was a research associate at Arecibo when the message was sent.

Other types of messages have been sent out periodically since then, but experts are still debating how wise it is to broadcast our existence. Most famously, the late physicist Stephen Hawking said letting extraterrestrials know where we are could turn out as badly for us as Christopher Columbus’ arrival in the New World turned out for Native Americans.

The downside of alien contact is explored in “Remembrance of Earth’s Past,” a book trilogy by Chinese science-fiction author Liu Cixin that may be turned into an Amazon video series.

On the other side of the argument, there’s Douglas Vakoch, who has been focusing on the idea of sending messages to extraterrestrials as the president of METI International. Vakoch argues that any aliens who could pick up on intentional Arecibo-style transmissions would already know we exist, based on other radio signals we’ve been sending out for decades.

“I wish I could tell people that somehow we are going to be safer if we don’t transmit,” Vakoch told me at the International Space Development Conference in May, “but in good conscience, I can’t.”

To mark this date in SETI history, Google is featuring an Arecibo-themed Google Doodle on its search page in lots of locales around the world, including Puerto Rico but not including the U.S. mainland. If you’re not in the zone, you can still check out the animated artwork and get the story behind it via Google’s Doodle directory. 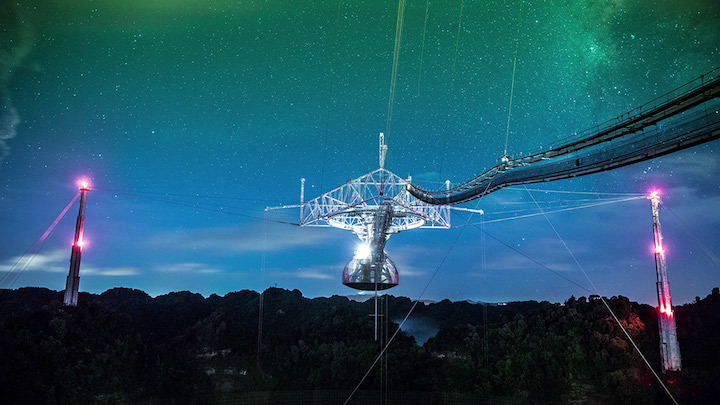 In 1974, the Arecibo Observatory made history by beaming the most powerful radio message into deep space ever made. The famous Arecibo Message was designed by the AO 74’s staff, led by Frank Drake, and with the help of the astronomer and famed science communicator Carl Sagan. It contained information about the human race and was intended to be our intergalactic calling card.

“Our society and our technology have changed a lot since 1974,” says Francisco Cordova, the director of the NSF-funded Arecibo Observatory. “So, if we were assembling our message today, what would it say? What would it look like? What one would need to learn to be able to design the right updated message from the earthlings? Those are the questions we are posing to young people around the world through the New Arecibo Message – the global challenge.”

Organizers are seeking innovative ideas from global collaborative efforts … to inspire a new generation of space enthusiasts and define the New Arecibo Message.

The NSF-funded facility, which is home to the largest fully operational radar telescope on the planet, will launch its online competition later today on the 44th anniversary of the original Arecibo message. Check out the observatory’s website fafter 1 p.m. for details and today’s Google doodlefor more information about the first message.

Organizers are seeking innovative ideas from global collaborative efforts of inter-generation, diverse and international teams of students to inspire a new generation of space enthusiasts and define the New Arecibo Message.

But this will be no simple task. In order to get started, teams of up to 10 students in grades kindergarten through college, must decode various clues that will be released online. Like a Chinese puzzle box, teams must learn about Space Sciences, break coded messages and solve brain-puzzles to qualify, get instructions, register and then submit their entries. Arecibo will post its first puzzle on its website and social media channels this afternoon (Nov. 16).

This challenge gives teams nine months to complete their designs. A winner will be announced during the Arecibo Observatory Week activities planned for 2019, which includes the special celebration of the 45th anniversary of the original Arecibo Message.

“We have quite a few surprises in store for participants and we will be sharing more details as the competition progresses,” Cordova says. “We can’t wait to see what our young people across the globe come up with.”

The Arecibo Observatory is operated by the University of Central Florida (UCF) in partnership with Sistema Ana G. Mendez Universidad Metropolitana and Yang Enterprises Inc., under a cooperative agreement with the National Society of Sciences (NSF). The planetary radar program is supported by NASA’s Near Earth Object Observation Program.