Elizondo and the "Five Observables"

Luis Elizondo, the former head of the Pentagon AATIP program and now Director of Special Projects with Tom DeLonge's To The Stars Academy, was the keynote speaker at this year's MUFON Symposium in Cherry Hill, New Jersey. His subject was, "The History of AATIP," the Pentagon's Advanced Aerospace Threat Identification Program. While much of Elizondo's talk repeated what he and others have said before, we did learn some new details on the matter.

Elizondo said that the AATIP produced "five observables," that supposedly demonstrate the reality of unknown, extraordinary flying craft.
First, "You're talking about instantaneous acceleration." No, that is an assumption, not something actually "observed." For one thing, that would violate fundamental laws of physics, somehow instantaneously accelerating a craft, while at the same time not smashing up whatever is inside it. We now know that the instance of supposed "instantaneous acceleration" in the Tic-Tac infrared video to which he refers is based upon an error. SkepticMick West wrote, "a lot of people have missed that fact that the sudden change in apparent velocity is actually due to a change in the zoom setting of the camera. When we correct for this by shrinking the 2x video back down to 1x then the "jerk" in velocity vanishes, and the movement is much smoother and slower, with no huge g-forces required." So the first "observable" is nothing more than a mistake. 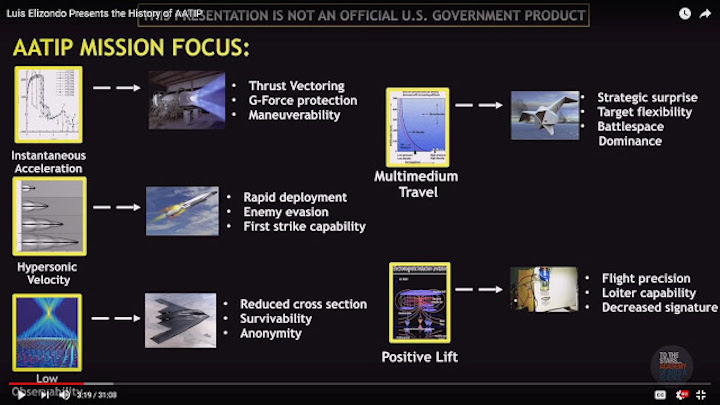 The second is "Hypersonic Velocity." This typically refers to a speed of Mach 5 or greater. What Elizondo does not explain is exactly how and where this has reportedly been observed, and how these alleged extreme velocities have measured and confirmed. Unless you know the distance to an object, you cannot calculate its speed. "Hypersonic Velocity." is an assumption, not an observation, and the claim has absolutely no credibility unless they can show exactly how it was calculated. At present, this is just an unsupported claim, not evidence.
The third is "Low Observability," otherwise presumably known as "stealth," an assumption confirmed by his use of the image of the F-117 Stealth Bomber. "Reduced cross section" has indeed been part of the Defense Department's stealth strategy for decades, involving aircraft, cruise missiles, and even ships. Elizondo does not even attempt to demonstrate that stealthiness is an attribute designed into any supposed craft they have reportedly encountered.
The fourth is "Multimedium Travel," when an object can supposedly operate in air, water, and even outer space. Unfortunately, he gives us no examples of this, so it is impossible to determine whether this is correct. One suspects that because an unidentified object turned up on radar or the FLIR, and later a pilot claimed to have seen a disturbance in the water (Tic-Tac video), Elizondo leaps to the conclusion that both were caused by the same object, one capable of "Multimedium Travel." More plausible is the assumption that these were unrelated incidents, linked together in the excitement of the moment.
The fifth "observable" is "Positive Lift," meaning "I do not have to be moving like an aircraft to generate lift under my wings." In other words, anti-gravity. This, like the first "observable", would be quite remarkable, if true. This supposedly gives you "loiter capability," meaning that you can just hover in one place, apparently without expending any energy. While "gravity control" or "anti-gravity" is a staple of Dr. Hal Puthoff's far-out physics, ordinary physicists have not yet caught up to Elizondo and Puthoff, and think this is all nonsense. Later, in a response to a question seen on the longer version of the video, Elizondo makes it clear that by "physics," he means "warping space-time" so that objects can apparently travel faster than light. He did not explain how this is to be accomplished. Perhaps he carries a black hole in his pocket?

I think it would be fair to say that AATIP's "5 Observables" are more accurately termed the "5 Assumables," given that there is a huge gap in going from what they believe is being observed to proving that their remarkable interpretations are valid. These are extraordinary claims, and as such require extraordinary proof, not just simple assumptions.
Clarifying some confusion concerning the project name: It recently came to light that the 'real name' of the recent Pentagon UFO program was supposedly AAWSAP, Advanced Aerospace Weapon System Application Program, and not AATIP. According to Elizondo, the AAWSAP program was founded in 2007, but in 2008 "AAWSAP is formally changed to AATIP by former program manager to focus more narrowly on the 5 observables and research of advanced physics applications." He did not name the former program manager; other documents suggest that James T Lacatski was project head until 2010 when Elizondo took over.
Some people have suggested that this confusion over the name was why all the FOIA requests concerning the project had not turned anything up, but nothing much is turning up, FOIA-wise, using either name. Referring to questions about why he did not clarify this sooner, Elizondo insisted that he was "not qualified to talk about it," since he was not part of the original program. Remarkably, he appears to be "qualified" to talk about it now. Supposedly AATIP collected "volumes and volumes of information" that he could not go into detail about because it remains classified. He claims that "Much of AATIP information remains FOIA-exempt," but did not state exactly what makes it so, just that it needs to be kept out of the hands of "the enemy." He repeated his claim that the government "authorized" the release of those videos, but offered no proof of it, in spite of a Pentagon spokesman's clear denials.

In the question-and-answer session, Elizondo dodged specific questions, and spoke only in the most general terms, repeating what has already been said. At the end of the Q&A, Travis Walton spoke to complain about the poor quality of the questions asked of Elizondo. Walton was disappointed that people didn't ask Elizondo questions he could answer, "rather than constantly pressing for things that you can't, or shouldn't" answer. The problem was, however, that there didn't seem to be any kind of interesting question that Elizondo wouldanswer.
Elizondo began his talk with the prediction, "I think the same time next year we're going to have a fundamentally different conversation," apparently implying that everybody will then be convinced  that aliens are here. Let's re-visit that prediction on July 29, 2019 to see how well it holds up. My predicton is, at that time the conversation will still be same old, same old.
Quelle: Bad UFOs: Skepticism, UFOs, and The Universe, Robert Sheaffer,
https://badufos.blogspot.com
UFO-Forschung - Luis Elizondo, the former head of the Pentagon AATIP program and the "Five Observables"
812 Views
Created with page4