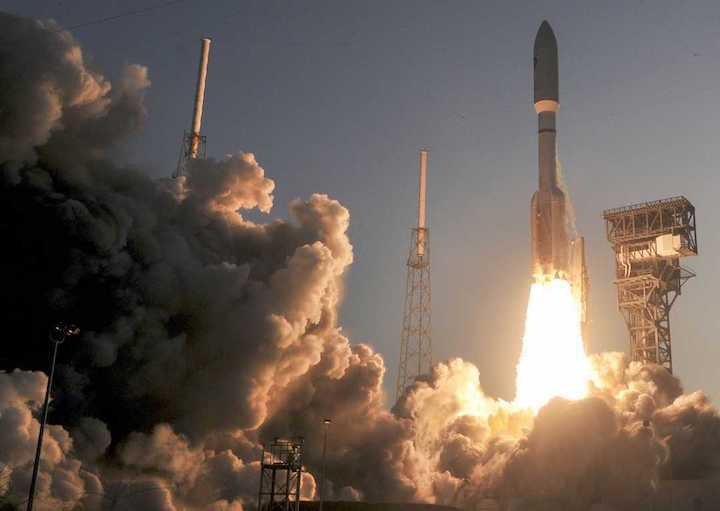 A United Launch Alliance Atlas V rocket set to the most powerful 551 configuration blasts off from Complex 41 at Cape Canaveral Air Force Station on Saturday, April 14, 2018 with a multi-payload mission for the Air Force.
Craig Bailey / FLORIDA TODAY

An Atlas V rocket set to its most powerful configuration will boost United Launch Alliance's first directly secured commercial payload from Cape Canaveral in the coming years, the company announced in France on Monday.

In its announcement of the new partnership with California-based communications company Viasat, ULA said it's slated to launch one in a series of ViaSat-3 satellites from Cape Canaveral Air Force Station's Launch Complex 41 sometime between 2020 and 2022. Details of the contract were released during the World Satellite Business Week summit, which is held annually in Paris.

Atlas V, often described as the "workhorse" of ULA's fleet, will launch the spacecraft to geostationary orbit in the 551 configuration, meaning it will have five strap-on solid rocket motors at its disposal and generate more than 2.5 million pounds of thrust at liftoff.

"The 551 configuration provides the performance to deliver a ViaSat-3 satellite into a high-energy geostationary transfer orbit where it can begin on-orbit operations faster than with other available launch vehicles," the company said.

ULA couldn't expand on the specifics of how much time will be saved by launching ViaSat-3 on Atlas V, but a spokesperson did tell FLORIDA TODAY the rocket's ability to perform a customized orbit and burn fuel to depletion will help get the satellite there faster. This is usually preferable for satellite operators, which tend to equate time on orbit with income – the longer a satellite remains grounded or takes getting to its final orbit, the longer it takes to begin generating revenue.

This marks the first commercial contract ULA has secured on its own since it took on responsibility for marketing and sales of Atlas V from Lockheed Martin Commercial Launch Services earlier this year. The Colorado-based launch provider, founded in 2006, is a joint venture between Boeing and Lockheed Martin.

Viasat said its ViaSat-3 series will eventually provide communications services to a swath of the globe from thousands of miles above Earth's surface: The first two will focus on the Americas, Europe, Middle East and Africa, while the third will fly over the Asia-Pacific region.

Final selection of exactly which ViaSat-3 will fly on which rocket will be announced later. To date, only Atlas V and European launch provider Arianespace's Ariane 5 rocket have been chosen for ViaSat-3 missions, leaving one spacecraft's ride to orbit unannounced. The company said it prefers "launch vehicle diversity," meaning SpaceX, for example, could still be in the mix.

Viasat and Boeing are splitting construction responsibilities for the spacecraft – the former is designing and building the payload in Tempe, Arizona, while the latter focuses on the propulsion platform and payload module structure in El Segundo, California. After testing in Tempe, Viasat is expected to ship the payload module back to Boeing, where it will see final mating and tests before transport to Cape Canaveral.