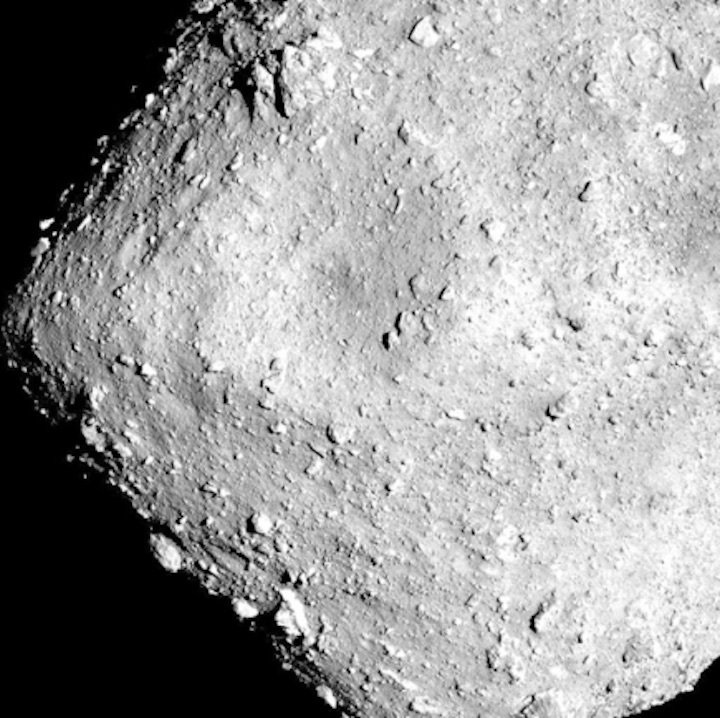 Boulders dot the surface of Ryugu in an image captured by Hayabusa 2 from about 6 kilometers above the asteroid.(Provided by the Japan Aerospace Exploration Agency and the University of Tokyo)

The Hayabusa 2 space probe has so far detected no signs of water on the asteroid Ryugu, but experts are not giving up hope for the discovery of the life-giving substance.

The Japan Aerospace Exploration Agency (JAXA) said Aug. 2 that data collected from the space probe showed no water on the boulders scattered on the surface of Ryugu.

Ryugu is a C-type asteroid, which is rich in carbon. Many C-type asteroids are known to contain moisture in their surface boulders, and experts hoped that Ryugu would be one of them.

The existence of water would increase the chances of confirming life-forms on the asteroid.

Ryugu is so far from Earth—300 million kilometers--that sufficient observational data of its surface had previously been out of reach.

Since late June, when Hayabusa 2 reached the area around Ryugu, the project team has obtained data from 54,000 spots on the asteroid’s surface, according to Kohei Kitazato, a JAXA project member and associate professor of Earth and planetary science astronomy at the University of Aizu.

But the data provided no evidence of water.

It is unknown whether the asteroid has always been devoid of water, or whether water did exist but evaporated due to such factors as solar light, Kitazato said.

“There is a possibility that water might be discovered after an artificial crater is created on its surface next spring,” Kitazato said.

Hayabusa 2 is scheduled to define a landing point on Ryugu by the end of this month and touch down on the asteroid in autumn for the first time.

The probe will fire a metal fragment to create a hole in the surface and collect samples from inside the asteroid, according to the plan.

Ryugu at an altitude of 1 km 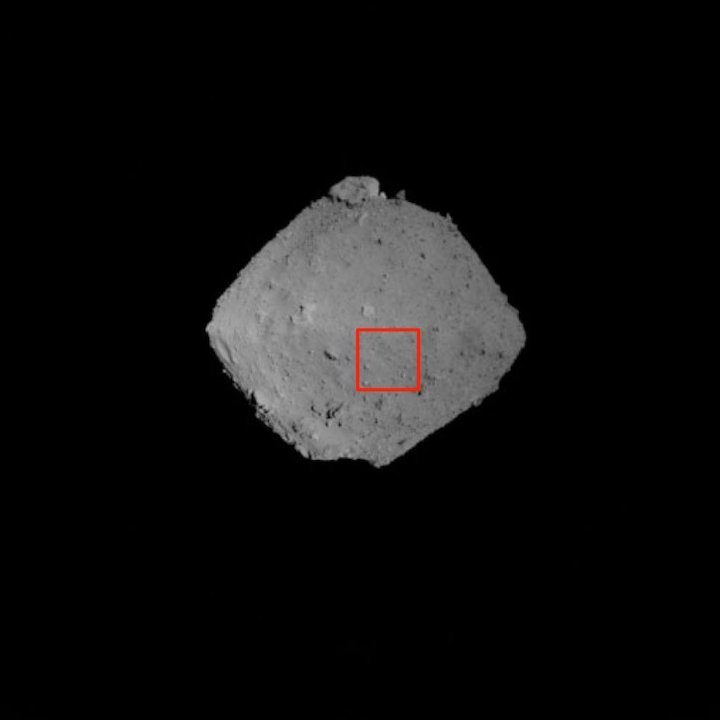 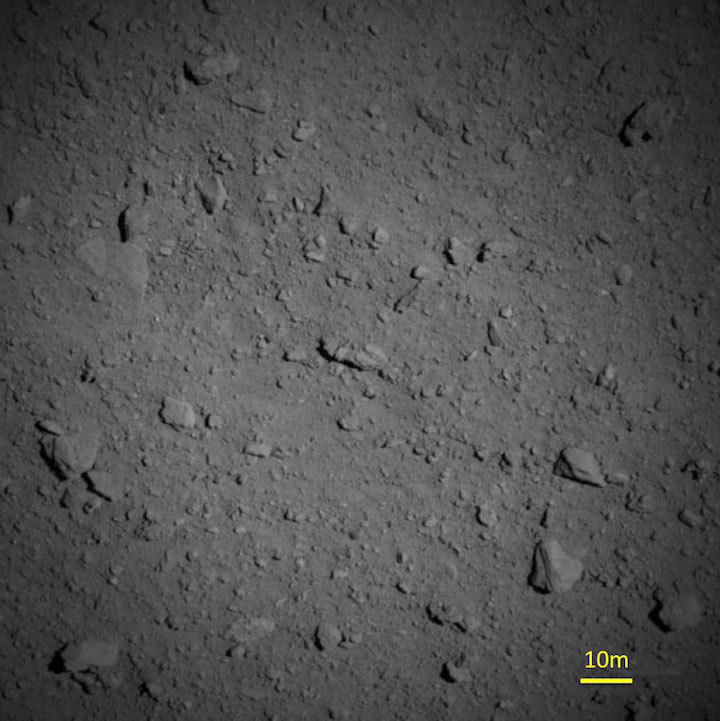 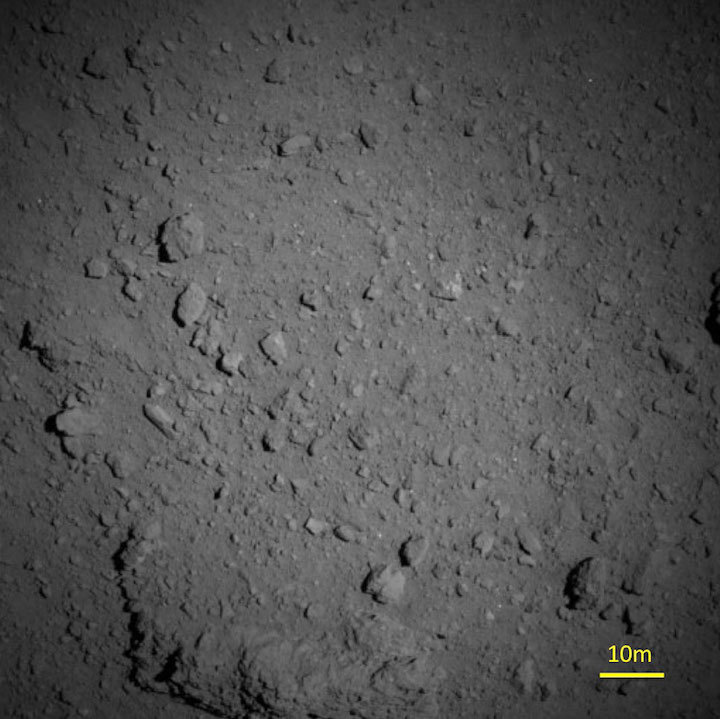 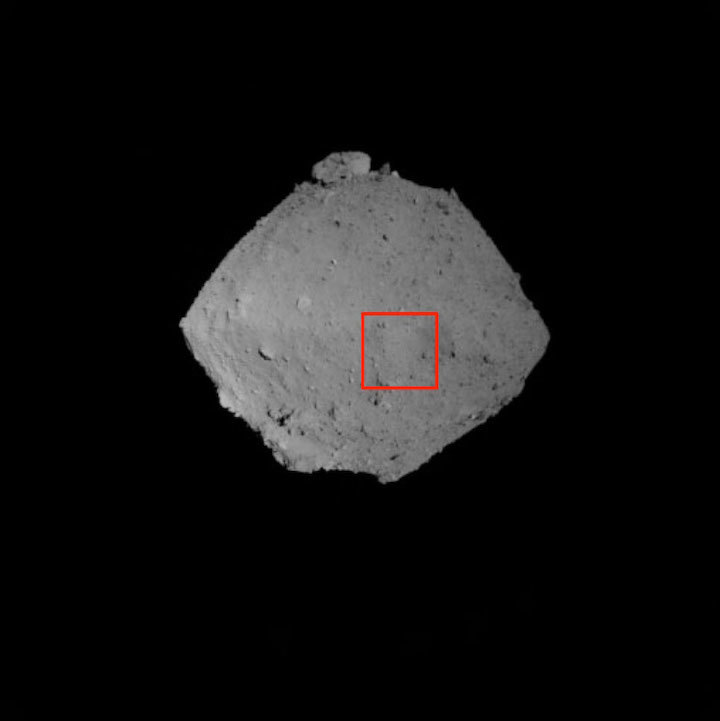 As Hayabusa2 began to rise, orbit and attitude control were not be performed until the spacecraft reached an altitude of about 5000 m. The data of the movement of Hayabusa2 during this time will also be used to estimate the gravity of Ryugu.

Hayabusa2 arrived at asteroid Ryugu on June 27. On July 20 - 21, the spacecraft descended to an altitude of about 6 km for BOX-C operations. On August 1, we descended again in a Medium Altitude Operation that took Hayabusa2 to a 5 km altitude. Then from August 6, we performed the third descent operation to measure the gravity of Ryugu.

In the gravity measurement operation, we allow the spacecraft's motion to be determined by the attraction of Ryugu's gravity without controlling the trajectory and attitude of the spacecraft ("free-fall" and "free-rise"). By monitoring the exact movement of the Hayabusa2, we can see how strong the gravitational attraction is from Ryugu.

Figures 1 and 2 show the images taken with the Optical Navigation Camera - Telescopic (ONC-T) just before reaching the minimum altitude.

Real time delivery of the navigation image.
The following list might not show fully processed images due to issues on data transfer and/or processing.

From our descent through BOX-C to an altitude of about 6km last week, we made a fleeting return to BOX-A at a 20km altitude. Then this week, we conducted the “Medium Altitude Observation” operation, which is the first critical operation after arrival. Unlike BOX-C, we descended to an altitude of about 5km in 24 hours while performing strict position control, then hovered at the same altitude for 1 asteroid rotation cycle while observing the asteroid. As the first critical operation, it was a tense period but the operation safely succeeded and I think gave momentum for future operations. Next week, we will implement the “Gravity Measurement Operation” which is a second critical operation. 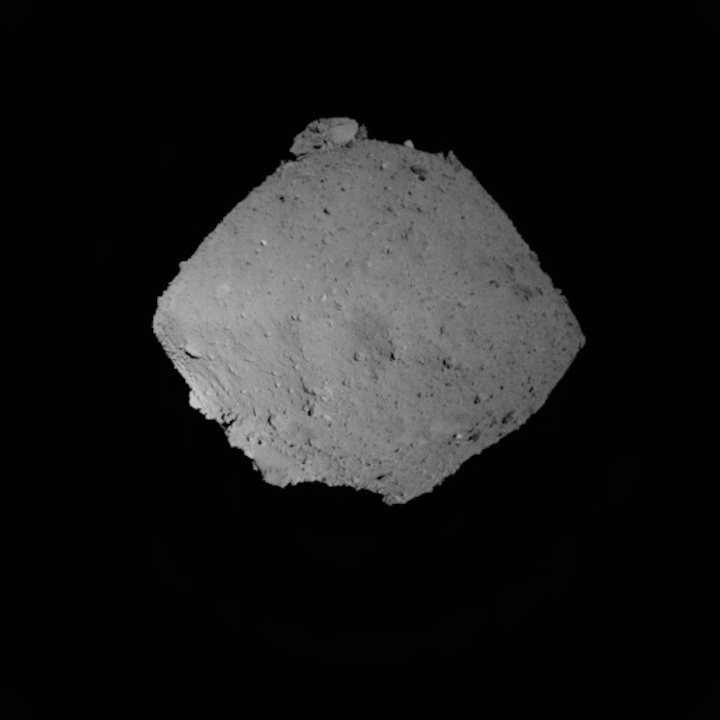 The Japanese Hayabusa 2 spacecraft dropped within a half-mile of asteroid Ryugu last week, probing its gravity field ahead of key decisions in the coming days to settle on a target site for the robotic mission’s first sample collection attempt, and the best touchdown location for a European lander stowed on the mothership.

The descent to a distance of 2,792 feet (851 meters) from Ryugu was the closest Hayabusa 2 has come to the asteroid since arriving at a stationkeeping position roughly 12 miles (20 kilometers) from the object June 27.

During the descent last week, ground controllers commanded Hayabusa 2 to disable its rocket control thrusters, allowing sensors on the spacecraft to measure the probe’s attraction to Ryugu by the asteroid’s gravitational field. Once it reached the point of closest approach Aug. 6, Hayabusa 2 fired jets to climb away from Ryugu, and the spacecraft again collected data on the asteroid’s gravity.

“In the gravity measurement operation, we allow the spacecraft’s motion to be determined by the attraction of Ryugu’s gravity without controlling the trajectory and attitude of the spacecraft (“free-fall” and “free-rise”),” officials wrote in an update on Hayabusa 2’s official website. “By monitoring the exact movement of the Hayabusa 2, we can see how strong the gravitational attraction is from Ryugu.”

The data will help navigators at the Japan Aerospace Exploration Agency’s control center in Sagamihara, on the outskirts of Tokyo, plot future movements of Hayabusa 2 around the asteroid. Improved gravity measurements should also help engineers develop more accurate trajectories when the mission descends to Ryugu’s surface later this year for the first of three touch-and-go landings to snag rock specimens for return to Earth.

Scientists are expected to soon decide where to send Hayabusa 2 this fall to gather its first sample. Researchers are meeting this week in Sagamihara to assess the mission’s early data returns.

Hayabusa 2 is a follow-up to Japan’s Hayabusa mission, which explored asteroid Itokawa in 2005 and returned microscopic samples to Earth in 2010. Hayabusa encountered numerous problems that threatened to end the mission, including a fuel leak and a malfunction in its sampling mechanism, which caused it to collect much less sample material than originally planned.

Japan’s new asteroid mission incorporated several upgrades from Hayabusa, and it launched in December 2014 to kick off the three-and-a-half-year trip to Ryugu.

Mission managers this week are also discussing where a European lander riding piggyback on Hayabusa 2 should land on Ryugu.

The Mobile Surface Asteroid Scout, or MASCOT, is a tiny addition to the Hayabusa 2 mission. Developed by the German and French space agencies — DLR and CNES — the battery-powered lander measures 12 inches by 12 inches by 8 inches (30 x 30 x 20 centimeters), and it weighs just 22 pounds (10 kilograms).

In early October, Hayabusa 2 will spring-eject the MASCOT spacecraft, aiming it toward a predetermined site on Ryugu for a slow-speed crash landing. Assuming the landing goes according to plan, MASCOT will power up its four instruments, including a camera, to survey the asteroid, then activate a swing arm to catapult to another part of Ryugu for more observations.

The asteroid spans around 3,000 feet (900 meters) in diameter, and takes around 7.6 hours to complete one rotation. Ryugu’s orbit loops it around the sun once every 1.3 years.

The diminutive size of Ryugu translates to a tenuous gravity field estimated to be 60,000 times weaker than Earth’s, meaning a relatively minor push could propel an object long distances across the asteroid, or even back into space.

Ryugu is a C-type asteroid, and scientists believe it contains primitive building blocks left over the formation of the solar system 4.5 billion years ago.

Ralf Jaumann from the DLR Institute of Planetary Research, principal investigator on MASCOT, says he is excited about the lander’s exploration of Ryugu.

“In all honesty, I have seen lots of asteroids before, but nothing quite like this,” Jaumann said in an interview posted on DLR’s website. “The many large boulders on the surface are extremely interesting! This is something that has never been seen. The Itokawa asteroid that was visited by the first Hayabusa mission also features boulders, but not as large or as homogenously distributed.

“Ryugu also has more impact craters than other small asteroids,” adds Jaumann, who also works as a scientist on NASA’s Dawn mission to Ceres, the largest object in the asteroid belt.

“But what is really impressive are the numerous, very large boulders on the surface,” Jaumann said. “This material appears to be much stronger than the fine material that we see. I am really looking forward to the lander being on the surface and being able to view such a boulder up close.”

Officials charged with selecting MASCOT’s landing site have ruled out the asteroid’s poles. Engineers also want to keep MASCOT away from a region where long periods of sunlight could cause it to overheat.

Hayabusa 2’s recent gravity measurement will feed into the decision on where to send MASCOT.

“Gravity will affect how MASCOT bounces and this will influence the final position at which the released lander comes to rest,” said Tra-Mi Ho, MASCOT project leader at DLR’s Institute of Space Systems. “Information on the asteroid’s thermal characteristics is also crucial. That is still lacking and is being examined at the moment. Another important aspect is the size of the rocks on Ryugu. A certain size of rock could cause MASCOT to get stuck.”

Despite the risk from Ryugu’s boulders, officials were heartened to discover the asteroid does not have the unusual dual-lobe potato shape of comet 67P/Churyumov-Gerasimenko, the destination where Europe’s Rosetta spacecraft explored for more than two years, and deployed a lander named Philae.

Philae and MASCOT were developed by many of the same engineers and scientists in Germany and France, but MASCOT is the smaller of the two. The lander set to arrive at Ryugu is designed to function for 16 hours — it can’t recharge with solar power — and will relay images and other data to Earth through the Hayabusa 2 mothership

“Ultimately, I was relieved that it was not a celestial body like the comet 67P/Churyumov-Gerasimenko, on which Philae landed in November 2014,” Ho said. “At least Ryugu is more consistently formed than 67P. Of course, we had qualms on seeing all those rocks – together with concerns about whether it would all be too challenging for MASCOT.”

Hayabusa 2 carries more deployable landers developed by Japanese scientists for placement on the surface of Ryugu over the next year-and-a-half.

The mission is set to depart the asteroid in late 2019, with return to Earth scheduled for December 2020 with a parachute-assisted landing of Hayabusa 2’s sample carrier in Australia.