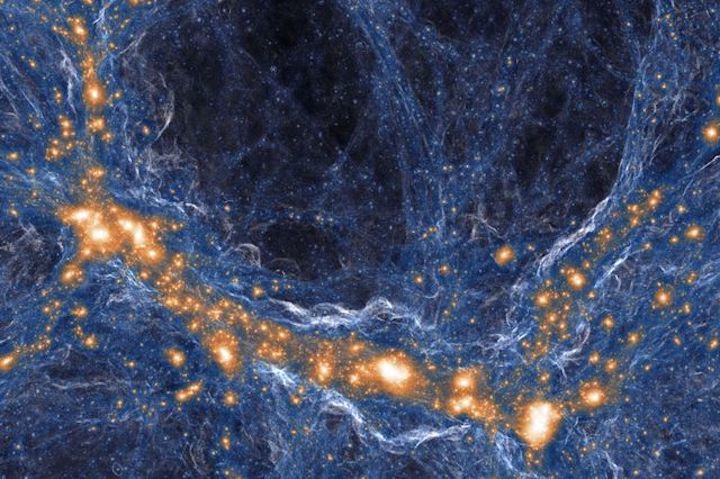 A computer simulation of the distribution of matter in the universe. Orange regions host galaxies; blue structures are gas and dark matter.

University of California astronomers, including three from UCLA, have resolved a mystery about the early universe and its first galaxies.

Astronomers have known that more than 12 billion years ago, about 1 billion years after the Big Bang, the gas in deep space was, on average, much more opaque than it is now in some regions, although the opacity varied widely from place to place. But they weren’t sure about what caused those variations.

To learn why the differences occurred, the astronomers used one of the world’s largest telescopes, the Subaru telescope on Mauna Kea in Hawaii, to search for galaxies of young stars in an exceptionally large region of space — 500 million light-years across — where they knew the intergalactic gas was extremely opaque.

If the region had an unusually small number of galaxies, the scientists would be able to conclude that starlight could not penetrate as far as expected through the intergalactic gas; if it had an unusually large number of galaxies, the implication would be that the region had cooled significantly over the previous several hundred million years. (Having few galaxies in a region would mean not only that there was less light created by those galaxies, but also that even more opaque gas was being formed, so the light could not travel as far as astronomers had expected.)

“It was a rare case in astronomy where two competing models, both of which were compelling in their own way, offered precisely opposite predictions, and we were lucky that those predictions were testable,” said Steven Furlanetto, a UCLA professor of astronomy and a co-author of the research.

The researchers found that region contains far fewer galaxies than expected — clear evidence that starlight could not get through. The paucity of galaxies could be the reason this region is so opaque.

“It is not that the opacity is a cause of the lack of galaxies,” Furlanetto said. “Instead, it’s the other way around.”

They concluded that because the gas in deep space is kept transparent by ultraviolet light from galaxies, fewer nearby galaxies might make it murkier.

The research is published in the Astrophysical Journal.

In the first billion years after the Big Bang, ultraviolet light from the first galaxies filled the universe and made the gas in deep space transparent. This would have occurred earlier in regions with more galaxies, the astronomers concluded. The astronomers plan to further study whether the void and others like it will reveal clues about how the first generations of galaxies illuminated the universe during that early period. Furlanetto said the astronomers hope that studying the interplay of galaxies and gas in deep space will reveal more about how the intergalactic ecosystem took shape during that period of the early universe.

The research was funded by the National Science Foundation and NASA.

Astronomie - In a massive region of space, astronomers find far fewer galaxies than they expected
663 Views
Created with page4