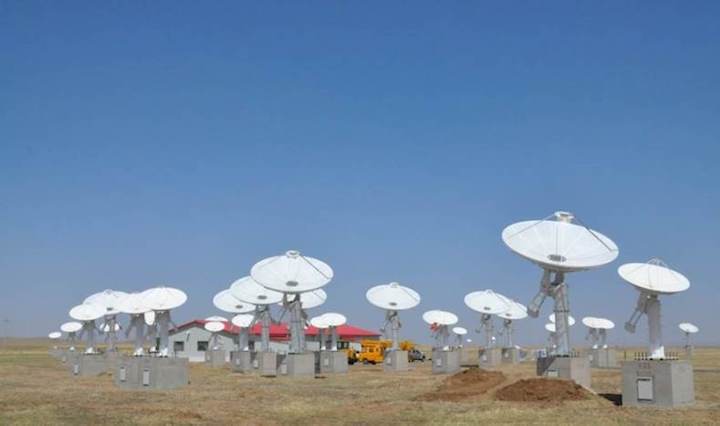 Imaging spectroscopy over the centimeter and decimeter wavelength range is important for solving key problems related to flare energy release, energetic particle acceleration and propagation, and mechanisms involved in the interaction between solar activity and the planetary space environment. These problems are fundamental in modern solar physics.

The Chinese Spectral RadioHeliograph (CSRH) is a state-of-the-art imaging telescope array, which will operate at centimeter and decimeter wavelengths (0.40 - 15.00 GHz). It has 100 antennas with diameters of 2.0 and 4.5 m in a 3-arm spiral array. It will obtain full imaging observations of the solar chromosphere and corona by using aperturesynthesis technology.

CSRH began construction in 2009 and is located in Inner Mongolia. It represents a new generation of solar radio telescopes that can generate observations with high spatial, temporal and spectral resolution. It will play a key role in solar physics and space weather studies. Results from this project will advance any knowledge of the Sun.

According to Yan Yihua, president of Division E Sun and Heliosphere, International Astronomical Union, the observation range of the CSRH and the Parker Solar Probe will overlap and it's possible that the two will cooperate in the future for specific scientific tasks.

NASA's Parker Solar Probe, the fastest spacecraft in history, launched on Sunday, is on a mission to study the Sun at closer range than any other spacecraft.

During its mission lifetime of seven years, the probe will complete 24 orbits of the Sun and fly within 6.1 million km of the Sun's surface at closest approach.

"Data from both sides could corroborate and supplement each other," said Yan.