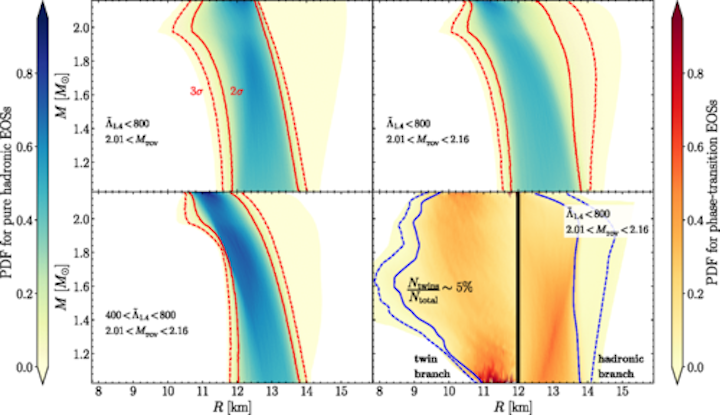 FRANKFURT. How large is a neutron star? Previous estimates varied from eight to sixteen kilometres. Astrophysicists at the Goethe University Frankfurt and the FIAS have now succeeded in determining the size of neutron stars to within 1.5 kilometres by using an elaborate statistical approach supported by data from the measurement of gravitational waves. The researchers’ report appears in the current issue of Physical Review Letters.

Neutron stars are the densest objects in our universe, with a mass larger than that of our sun compacted into a relatively small sphere whose diameter is comparable to that of the city of Frankfurt. This is actually just a rough estimate, however. For more than 40 years, the determination of the size of neutron stars has been a holy grail in nuclear physics whose solution would provide important information on the fundamental behaviour of matter at nuclear densities.

The data from the detection of gravitational waves from merging neutron stars (GW170817) make an important contribution toward solving this puzzle. At the end of 2017, Professor Luciano Rezzolla, Institute for Theoretical Physics at the Goethe University Frankfurt and FIAS, together with his students Elias Most and Lukas Weih already exploited this data to answer a long-standing question about the maximum mass that neutron stars can support before collapsing to a black hole - a result that was also confirmed by various other groups around the world. Following this first important result, the same team, with the help of Professor Juergen Schaffner-Bielich, has worked to set tighter constraints on the size of neutron stars.

The crux of the matter is that the equation of state which describes the matter inside neutron stars is not known. The physicists therefore decided to pursue another path: they selected statistical methods to determine the size of neutron stars within narrow limits. In order to set the new limits, they computed more than two billion theoretical models of neutron stars by solving the Einstein equations describing the equilibrium of these relativistic stars and combined this large dataset with the constraints coming from the GW170817 gravitational wave detection.

“An approach of this type is not unusual in theoretical physics," remarks Rezzolla, adding: "By exploring the results for all possible values of the parameters, we can effectively reduce our uncertainties." As a result, the researchers were able to determine the radius of a typical neutron star within a range of only 1.5 km: it lies between 12 and 13.5 kilometres, a result that can be further refined by future gravitational wave detections.

"However, there is a twist to all this, as neutron stars can have twin solutions," comments Schaffner-Bielich. It is in fact possible that at ultra-high densities, matter drastically changes its properties and undergoes a so-called "phase transition." This is similar to what happens to water when it freezes and transitions from a liquid to a solid state. In the case of neutron stars, this transition is speculated to turn ordinary matter into "quark matter," producing stars that will have the exact same mass as their neutron star "twin," but that will be much smaller and consequently more compact.

While there is no definite proof for their existence, they are plausible solutions and the researchers from Frankfurt have taken this possibility into account, despite the additional complications that twin stars imply. This effort ultimately paid off as their calculations have revealed an unexpected result: twin stars are statistically rare and cannot be deformed very much during the merger of two such stars. This is an important finding as it now allows scientists to potentially rule out the existence of these very compact objects. Future gravitational-wave observations will therefore reveal whether or not neutron stars have exotic twins.