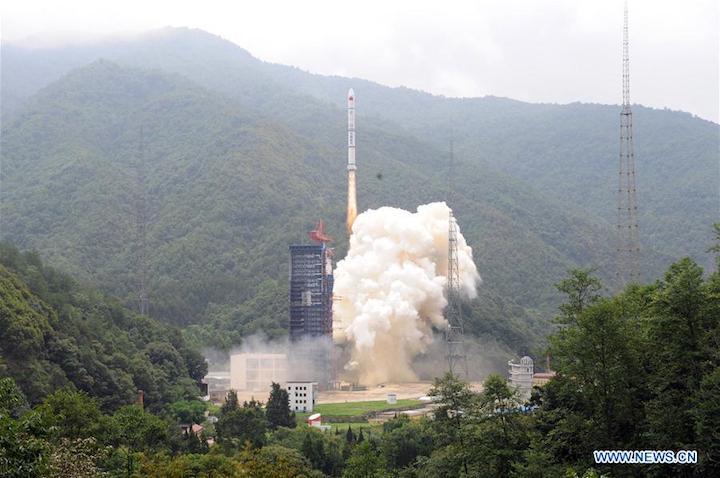 The twin satellites were launched at 11:30 a.m., and entered their intended orbit.

The twin-satellites missions are to link the inter-satellite network and conduct new technology tests on satellites earth-observation.

It was the 278th mission of the Long March rocket series.

China launched a pair of technology test satellites from the Xichang launch centre early on Wednesday as the country continues with an accelerated rate of space launches through 2018.

A Long March 2C rocket lifted off from the Xichang Satellite Launch Centre at 03:30 UTC (11:30 local) with a modified payload fairing containing the satellites named as 'new technology test' A and B.

The China Aerospace Science and Technology Corporation (CASC), the main contractor for the Chinese space programme, confirmed success of the launch within 30 minutes of liftoff.

The article also notes that the pair of satellites were developed by a company under the China Academy of Space Technology (CAST), a spacecraft designer and manufacturer subordinate to CASC.

No further details of the satellites were immediately made available.

China has succeeded with all 18 of its launches so far in 2018, with CASC aiming to launch around 36 times this year, with commercial launches potentially taking that number to 40.

Achieving this figure would mean nearly doubling the national record of 22 launches set in 2016.

The country launched 18 out of a planned 30 missions in 2017, as back-to-back launch issues in June and July—mostly notably the failure of the Long March 5—brought a near 90-day halt to launch activity.

The return-to-flight of the Long March 5 heavy-lift rocket from Wenchang around November and the Chang'e-4 lunar landing and roving mission to the far side of the Moon in December are set to be the most significant missions of the year.

The two-stage, hypergolic Long March 2C has now launched 46 times, suffering one failure, in 2011. The launch vehicle has lifted off from all three of China's inland launch sites, Jiuquan, Taiyuan and Xichang.

In the near future the rocket will be used to launch high-resolution electro-optical Pakistan Remote Sensing Satellite-1 (PRSS-1), developed by CAST, and the smaller, experimental PakTES-1A, built by the Space and Upper Atmospheric Research Commission (SUPARCO) - Pakistan’s space agency - with assistance from the Space Advisory Company of South Africa.

The Long March 2C will also loft the China-France Oceanography Satellite (CFOSAT) into space in September this year.

A new upper stage for the Long March 2C, the Yuanzheng-1B, is expected to debut in the near future.

Artist's rendition of the deployed CFOSAT spacecraft in orbit CNES

A Yuanzheng-1A upper stage being prepared for integration with a Long March 7 launch vehicle. CASC