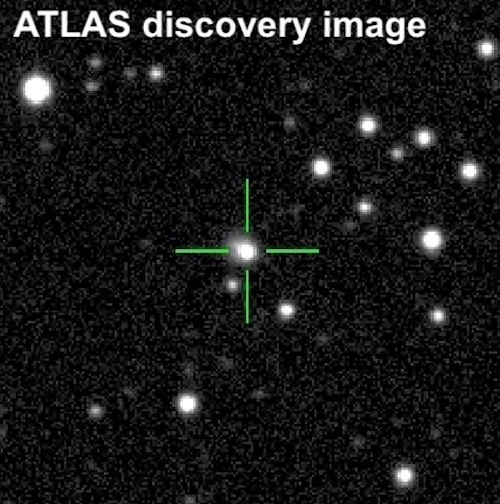 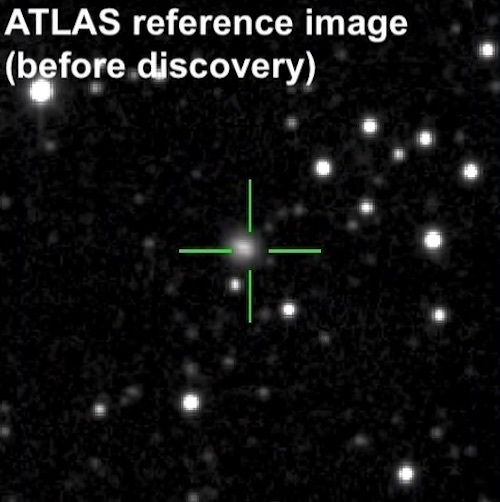 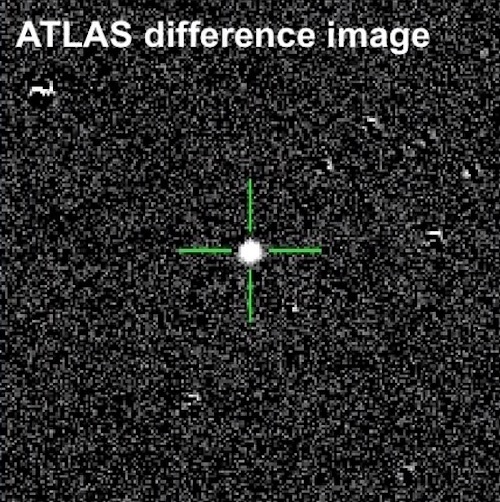 Images taken by the ATLAS telescopes before the explosion (middle) and after it (left) show the sudden brightening in the galaxy CGCG 137-068. The far-right image shows the difference between the two. (Stephen Smartt/ATLAS)
-

A mysterious cataclysm in a neighboring galaxy was spotted in the sky above Hawaii last week, sending astronomers around the world scrambling to understand the source of the staggeringly brilliant flash.

“I’ve never seen anything like this before in the local universe,” said Stephen Smartt, an astrophysicist at Queen's University Belfast and a lead scientist for the Hawaii-based ATLAS survey, which first observed the object.

The June 16 detection was first posted on the Astronomer's Telegram, an online service for astronomers to rapidly report interesting new observations. Thanks to the site's randomized three-letter naming system, the object has been dubbed AT2018cow, or “the cow” for short.

It immediately stood out to Smartt because it was so unlike a standard exploding star. Most events like it take several weeks to reach peak luminosity, but in the course of just three days, AT2018cow became about 10 times as bright as a normal supernova.

The object quickly captured other astronomers' attention. In the week since, the ATLAS observation has been followed up by about two dozen teams of astronomers using telescopes based on at least four continents and in space.

“I think it's the most notices for any individual object in such a short period of time,” said Robert Rutledge, editor in chief of the Astronomer's Telegram and an astrophysicist at McGill University in Canada. “It has produced a lot of interest.”

Smartt initially suspected the flash must have come from something in our own galaxy, because it was so bright. But when other scientists conducted spectroscopic analyses of the object, separating the light out into its component wavelengths, it turned out that AT2018cow had features associated with CGCG 137-068, a galaxy in the constellation Hercules. Its light bore the signature of having been stretched out over the course of its 200-million-light-year journey from that galaxy to Earth.

That's not far, by astronomical standards, which means the explosion may have produced detectable gravitational waves. But the twin LIGOdetectors in Washington and Louisiana are undergoing upgrades, leaving it an open question whether anyone might have seen those signals.

Subsequent observations have only added to the object's mystery. It was extraordinarily bright in all parts of the electromagnetic spectrum — from X-rays to radio waves. Whereas most supernovas carry spectral signatures called absorption lines, caused by certain elements within them that absorb wavelengths of light, AT2018cow is “surprisingly smooth,” Smartt said. Although there are some strange features in the signal, “no one has successfully matched them yet to the known features we normally see in supernova,” he said.

Meanwhile, AT2018cow is already beginning to decline in brightness, even as astronomers continue to puzzle over its cause. It may be a Type 1c supernova, caused by the core collapse of a massive star that has already lost its outer veil of hydrogen and helium. The strong X-ray and radio signals also suggest that the explosion produced a jet of particles moving close to the speed of light.

“This does look like it is quite a rare object,” Smartt said. “Just the fact that it's detected over all these wavelengths leaves a lot of rich physics to understand.”

These are just the early stages of the scientific process, he noted. The Astronomer's Telegram isn't a peer-reviewed journal, and the observations of AT2018cow still require months of additional research and analysis before they can be formally published.

But this is a fun chance to watch astronomers get excited about something strange and potentially new in real time.

“People are just putting out their data, and everyone does realize the data look quite strange,” Smartt said.