The largest of Pluto's five moons, Charon, was discovered on June 22, 1978, by James Christy and Robert Harrington at the U.S. Naval Observatory in Flagstaff, Arizona – only about six miles from where Pluto itself was discovered at Lowell Observatory. They weren't even looking for satellites of Pluto – Christy, examining a series of grainy telescope images, trying to refine Pluto's orbit around the Sun. Christy and others tell the story of this amazing scientific find, which fueled Pluto’s transformation from a telescopic dot into an actual planetary system – and a source of many discoveries to come.

The largest of Pluto's five moons, Charon, was discovered 40 years ago today by James Christy and Robert Harrington at the U.S. Naval Observatory in Flagstaff, Arizona – only about six miles from where Pluto itself was discovered at Lowell Observatory. They weren't even looking for satellites of Pluto – Christy was trying to refine Pluto's orbit around the Sun.

What a difference 40 years makes. An enhanced color image of Charon from data gathered by the New Horizons spacecraft in 2015 shows a range of diverse surface features, significantly transforming our view of a moon discovered in 1978 as a “bump” on Pluto (inset) in a set of grainy telescope images.
Credits: U.S. Naval Observatory; NASA/Johns Hopkins University Applied Physics Laboratory/Southwest Research Institute 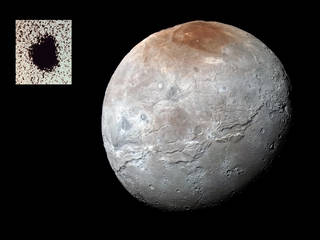 Before NASA’s New Horizons spacecraft flew through the Pluto system in July 2015, many New Horizons scientists expected Charon to be a monotonous, crater-battered world. Instead, they found a landscape covered with giant mountains, vast canyons, a strange polar cap, surface-color variations and landslides.

“Even if Pluto wasn’t there, Charon would have been a great flyby target by itself,” said Will Grundy, a New Horizons science team co-investigator from Lowell Observatory in Flagstaff, Arizona. “It’s a far more exciting world than we imagined.”

It would have taken serious imagination to see much of anything in the grainy telescope plates of Pluto that U.S. Naval Observatory astronomer James Christy was checking 40 years ago to refine Pluto’s orbit. But on June 22, 1978, Christy did notice something – a small bump on one side of Pluto.

As he looked at other images he saw the bump again and again, only this time moving from one side of Pluto to another. Further examination showed the bump seemed to move around Pluto, cycling back and forth over Pluto's own rotation period – 6.39 days. He figured either Pluto possessed a mountain thousands of miles high, or it had a satellite in a synchronous orbit. In the 48 years that had passed since Clyde Tombaugh discovered Pluto at Lowell Observatory in 1930, no evidence of any moon of Pluto had ever been spotted.

The Naval Observatory detailed the next steps to confirm the possible moon in a 1998 story about the 20th anniversary of the discovery: Christy scoured the observatory's image archives and found more cases where Pluto appeared strangely elongated. He measured the angle (from north) where the elongations appeared, while his colleague Robert Harrington calculated what the answer "should be" if the elongation was caused by an orbiting satellite.

Their calculations matched. But to be sure, they waited for the Naval Observatory's 61-inch telescope to make one more confirmation. And on July 2, 1978, new images showed the elongation due to a satellite right where it was supposed to be. They announced their discovery to the world five days later. 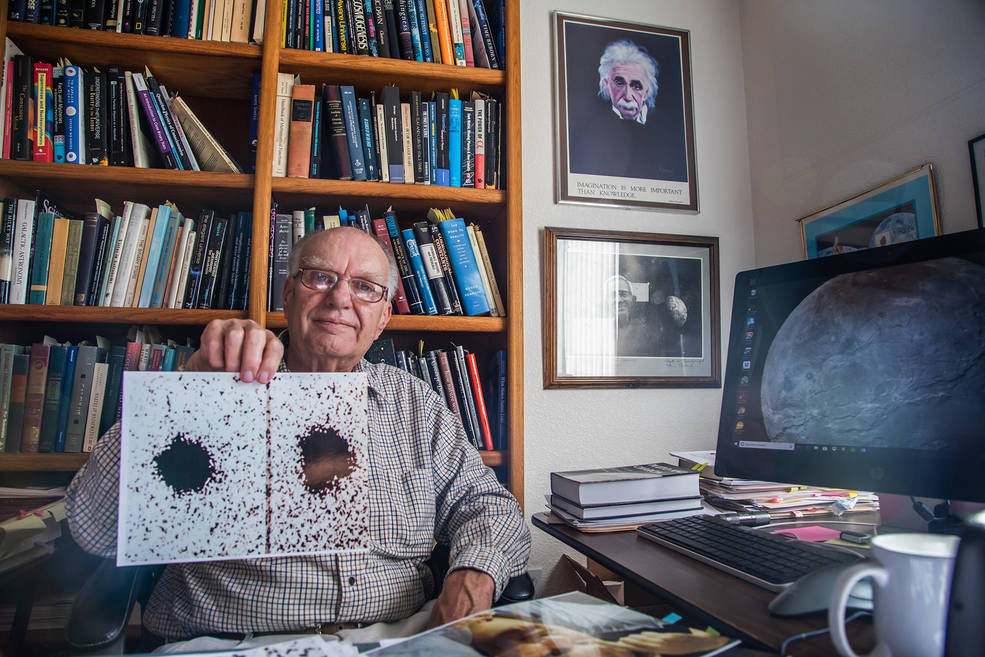 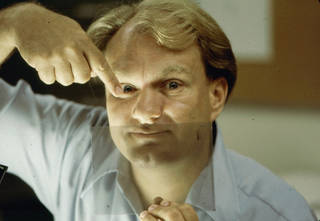 Jim Christy points to the photographic plate on which he discovered Pluto’s largest moon, Charon, in 1978.
Credits: U.S. Naval Observatory
-

The discovery of Charon fueled Pluto’s evolution from a telescopic dot into an actual planetary system – and a source of many discoveries yet to come.

About the size of Texas, Charon is the largest moon in the solar system relative to its parent planet. Together, Pluto and Charon were the first known double planet – or binary – two bodies that orbit a common center of gravity. Modeling also shows that Pluto-Charon formed by giant impact, very much like the Earth-Moon system.

Charon’s size and proximity to Pluto helped the push to send a mission to Pluto and see, close up, something for the first time. “The importance of the discovery of Charon really cannot be underestimated,” said Alan Stern, New Horizons principal investigator from the Southwest Research Institute in Boulder, Colorado. “We on the New Horizons team owe a big debt of gratitude to Jim Christy for his landmark discovery.”

In passing just about 18,000 miles (29,000 kilometers) from Charon on July 14, 2015, New Horizons completely transformed our view of the moon. High-resolution images of Charon’s Pluto-facing hemisphere revealed a belt of fractures and canyons that stretches more than 1,000 miles (1,600 kilometers) across the entire face of Charon and, likely, onto the moon's far side. Four times as long as the Grand Canyon, and twice as deep in places, these faults and canyons indicate a titanic geological upheaval in Charon’s past.

Tradition allows a moon’s discoverer to suggest a name for the new satellite to the International Astronomical Union (IAU). Christy wanted to name it after his wife, Charlene, known as “Char” to friends and family. "I’m always thinking about physics, electrons and protons," Christy recalled. "I added an '-on' to it and said I could name it Charon."

While wondering whether the name Charon would be approved, Christy checked the dictionary and found “Charon” was actually a real term — the mythological ferryman who carried souls across the river Acheron, one of the five mythical rivers that surrounded Pluto's underworld. With that, he knew the name would be a perfect fit for a companion of Pluto and made that linkage known to the IAU, which approved the name Charon.

“A lot of husbands promise their wives the moon," Charlene Christy said, "but Jim actually delivered.”

“That huge tectonic belt tells us Charon likely had an ocean under its surface, and as the ocean froze, the ice would expand and crack the surface,” said Cathy Olkin, a New Horizons deputy project scientist from Southwest Research Institute in Boulder. “That's an important finding, especially in light of the increasing scientific interest in ocean worlds across the solar system."

What’s in the Names? Learn about Charon’s Surface Features

An especially cool feature is Charon’s reddish polar coloring. Methane gas escapes from Pluto’s atmosphere and becomes “trapped” by the moon’s gravity and freezes to the cold, icy surface at Charon’s pole. Chemical processing by ultraviolet light from the Sun then transforms the methane into heavier hydrocarbons and eventually into reddish organic materials called tholins.

"Who would have thought that Pluto is a graffiti artist, spray-painting its companion with a reddish stain that covers an area the size of New Mexico?" asked Grundy, lead author of a 2016 paper on the phenomenon in the journal Nature.

For Christy – who, with Charlene, was recognized by a packed auditorium at the Johns Hopkins Applied Physics Lab in Maryland when the first close-up images of Charon were revealed – the transformation of Charon from a grainy blob into a real world over the past 40 years has been nothing short of amazing.

“When you go from this little blur in which you don’t actually see anything, to the enormous detail New Horizons sent back,” Christy said, “it’s incredible.”