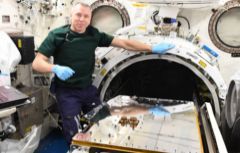 RemoveDEBRIS, one of the world’s first attempts to address the build-up of dangerous space debris orbiting Earth, was launched to the Space Station via NanoRacks on the 14th SpaceX Commercial Resupply Mission in early April.

NanoRacks created the Kaber system to accommodate the increasing customer demand for commercial opportunities to deploy MicroSats from the International Space Station. Kaber offers deployments for satellites up to approximately 85 kilograms, and NanoRacks is able to provide Kaber launches on both SpaceX and Northrop Grumman Innovation Systems (previously Orbital ATK) commercial resupply missions.

The RemoveDEBRIS mission will perform four experiments, which will be tested on two CubeSats to-be-deployed from the larger satellite, acting as artificial targets. These experiments include both the first harpoon capture in orbit and a net that will be used on a deployed target. The team will also test a vision-based navigation system that uses cameras and LiDaR technology to observe CubeSats that will be released from the main spacecraft. Finally, the RemoveDEBRIS craft will deploy a large drag sail that will cause the orbit of the spacecraft to rapidly decay until it is destroyed in the Earth’s atmosphere.

“It’s wonderful to have helped facilitate this ground-breaking mission,” says NanoRacks External Payloads Manager, Conor Brown. “RemoveDEBRIS is demonstrating some extremely exciting active debris removal technologies that could have a major impact to how we manage space debris moving forward. This program is an excellent example of how small satellite capabilities have grown and how the Space Station can serve as a platform for missions of this scale. We’re all excited to see the results of the experiments and impact this project may have in the coming years.”

The NanoRacks Kaber Microsat Deployer (Kaber) is a reusable system that provides command and control for satellite deployments from the International Space Station (ISS). NanoRacks developed the Kaber leveraging its experience deploying CubeSats from the ISS. The Kaber enables NanoRacks to support deployment into space of microsatellites up to about 82 kg from the ISS.

The Kaber promotes ISS utilization by enabling deployment into orbit for a class of payload developers normally relying on expendable launch vehicles for space access. Microsatellites that are compatible with the NanoRacks Kaber Deployer have additional power, volume and communications resources enabling missions in low Earth orbit of more scope and sophistication. 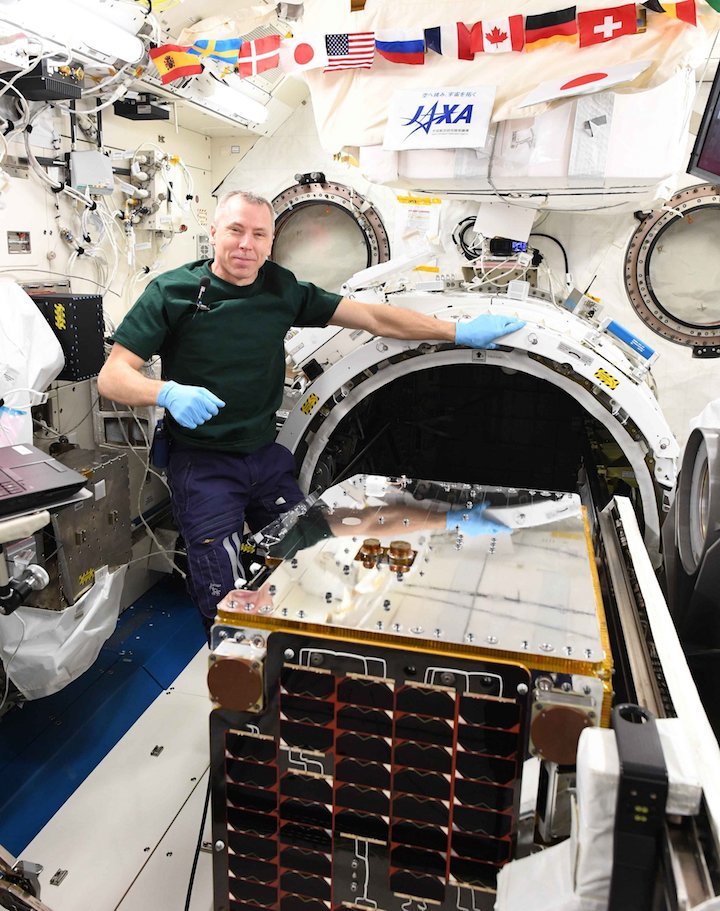 Airbus net, vision based navigation, and harpoon experiments will deploy in orbit

Toulouse/Stevenage/Bremen, 20/06/2018 - The space debris removal technology mission RemoveDEBRIS, led by the Surrey Space Centre (SSC) at the University of Surrey, has been launched into orbit from the International Space Station (ISS). RemoveDEBRIS will demonstrate a range of innovative technologies to clean up space debris, with the first Airbus designed and built experiment due for deployment in October 2018.

The spacecraft features three Airbus technologies to perform Active Debris Removal (ADR): a net and a harpoon to capture debris, and also a Vision Based Navigation (VBN) system to develop rendezvous techniques in orbit with space debris. The spacecraft itself was designed and built by Airbus subsidiary Surrey Satellite Technology Limited (SSTL) and also includes a drag sail to speed up deorbiting of the whole mission.

The mission timelines will see the net deployed in October this year, followed by the VBN test in late December and then the harpoon in February 2019. The experiments will all be carried out below the orbit of the ISS.

The net experiment, developed by Airbus in Bremen, will see a cubesat deployed from the main mission craft. When the cubesat is 5 metres away, it will then be targeted by the net and captured at approximately 7 metres before it floats away to deorbit.

The Airbus Stevenage designed harpoon will see a 1.5 metre boom deployed from the main spacecraft with a piece of composite panel on the end. The harpoon will be fired at 20 metres/sec to penetrate the target and demonstrate the ability of a harpoon to capture debris.

Nicolas Chamussy, Head of Airbus Space Systems said: “We have spent many years developing innovative active debris removal systems to be at the forefront of tackling this growing problem of space debris and to contribute to the UNs’ Sustainable Development Goals for our future generations. We will continue to work closely with teams across the world to make our expertise available to help solve this issue.”

After completion of the Airbus designed ADR, the main spacecraft will deploy the drag sail developed by SSC which will deorbit the craft in approximately 8 weeks. Without the drag sail, deorbiting would take more than 2.5 years.

This Space Station satellite deployment opportunity was made possible thanks to NanoRacks and its Space Act Agreement with NASA’s U.S. National Labs. 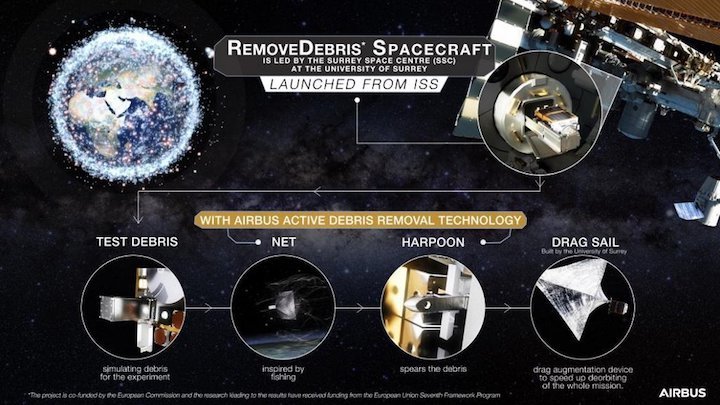