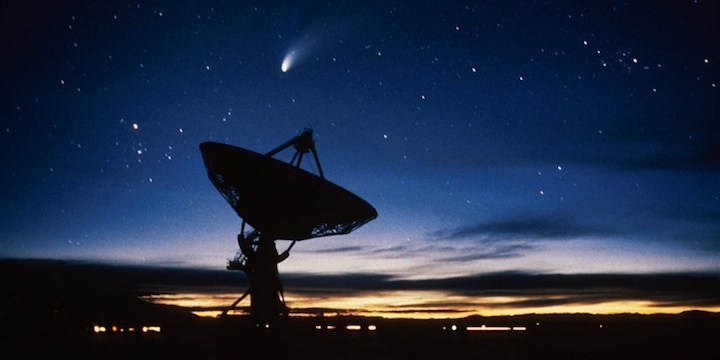 With all the news stories these days about computer hacking, it probably comes as no surprise that someone is worried about hackers from outer space. Yes, there are now scientists who fret that space aliens might send messages that worm their way into human society — not to steal our passwords but to bring down our culture.

How exactly would they do that? Astrophysicists Michael Hippke and John Learned argue in a recent paper that our telescopes might pick up hazardous messages sent our way — a virus that shuts down our computers, for example, or something a bit like cosmic blackmail: “Do this for us, or we’ll make your sun go supernova and destroy Earth.” Or perhaps the cosmic hackers could trick us into building self-replicating nanobots, and then arrange for them to be let loose to chew up our planet or its inhabitants.

Mind you, making a small star like the sun go supernova would be a mind-boggling trick — one that would impress astrophysicists (if any were left). As for the nanobots, I figure the aliens need only wait a century or two, and we’ll make the little devils ourselves, without any help.

It’s indisputable that space aliens, if they do exist, might not be friendly. But it’s hard to think of things that we could do for agile, technically sophisticated aliens that they couldn’t accomplish more easily on their own. Imagine modern humans threatening Neanderthals with nuclear war unless they washed our cars. Would that make any sense?

The astrophysicists also suggest that the extraterrestrials could show their displeasure (what did we do?) by launching a cyberattack. Maybe you’ve seen the 1996 film “Independence Day,” in which odious aliens are vanquished by a computer virus uploaded into their machinery. That’s about as realistic as sabotaging your neighbor’s new laptop by feeding it programs written for the Commodore 64.

In other words, aliens that could muster the transmitter power (not to mention the budget) to try wiping us out with code are going to have a real compatibility problem. The Stuxnet virus that took out Iran’s enrichment centrifuges was designed to target a contemporary bit of software: the Windows operating system.

It’s worth remarking that today’s SETI experiments — in which large antennas are used to search for signals from alien societies — are largely impervious to any of this chicanery. SETI receivers integrate incoming signals (which is to say, they average them) over seconds or minutes. That would turn any message into digital goo, and no pernicious content would remain. Yes, that’s a technical point, but I think it’s highly unlikely we’ll ever have computers susceptible to Klingon code.

Yet there is a way that messages from space might be disruptive. Extraterrestrials could simply give us some advanced knowledge — not as a trade, but as a gift. How could that possibly be a downer? Imagine: You’re a physicist who has dedicated your career to understanding the fundamental structure of matter. You have a stack of reprints, a decent position, and a modicum of admiration from the three other specialists who have read your papers. Suddenly, aliens weigh in with knowledge that’s a thousand years ahead of yours. So much for your job and your sense of purpose.

If humanity is deprived of the opportunity to learn things on its own, much of its impetus for novelty might evaporate. In a society where invention and discovery are written out of the script, progress and improvement would suffer.

Then again, aliens would likely have real trouble transmitting knowledge to us. In movies, extraterrestrials often communicate with us in colloquial English. But a real message from space is likely to be no more understandable than a digital TV signal would be to Guglielmo Marconi. An alien transmission is unlikely to be a Trojan horse — but it would at least tell us that there’s someone outside the gates.