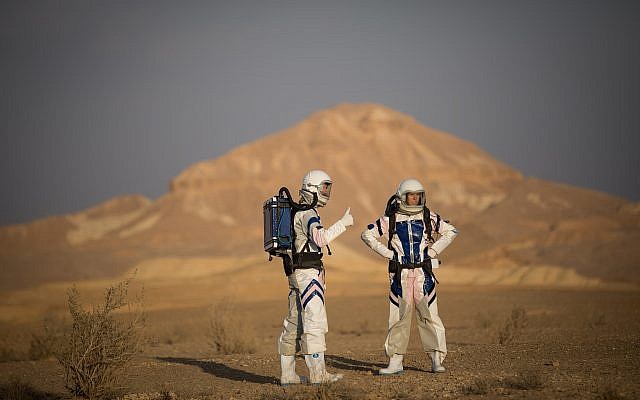 Deep in a forbidding, cratered and rock-strewn wilderness, six Israeli pioneers tried their hand this month at life on Mars.

On Sunday, they took off their helmets and sucked in the highly breathable air of Israel’s Negev desert, where they had spent the last four days simulating a mission to the Red Planet.

The mission was the first of several planned “expeditions” to Mars, held in the D-MARS (Desert Mars Analog Ramon Station) facility near the town of Mitzpeh Ramon, in the rugged Ramon crater. 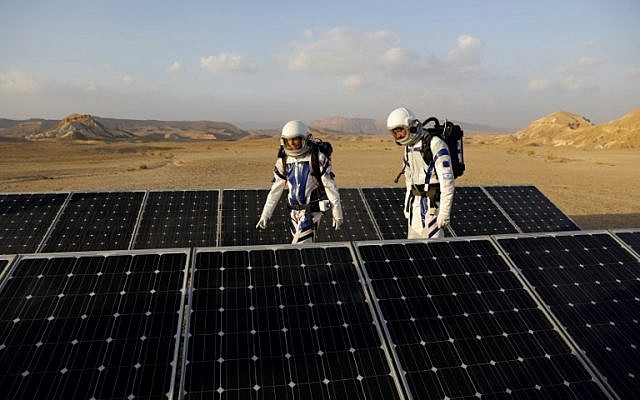 The experiment, one of several analog Mars missions around the world, was meant to help plan for a future manned mission to the Red Planet as well as boost Israel’s mostly nascent space program, which currently consists of tech know-how, a number of satellites, and a lot of dreams.

The initiative is funded by the Israeli Space Agency and the Israeli Ministry of Science, Technology and Space.

“D-Mars is half about the research, and the other half is about the outreach. A major part of this project is getting public interest and getting students interested in space,” participant Guy Ron told the Reuters news agency.

During the simulation, the so-called “Ramonauts” tested the habitat design, the spacesuits, the communication infrastructure and workflows with the Mission Support Center, according to the project’s organizers.

In addition, they carried out five scientific experiments, including looking for cosmic radiation, a 3-D printing project and a psychological test. 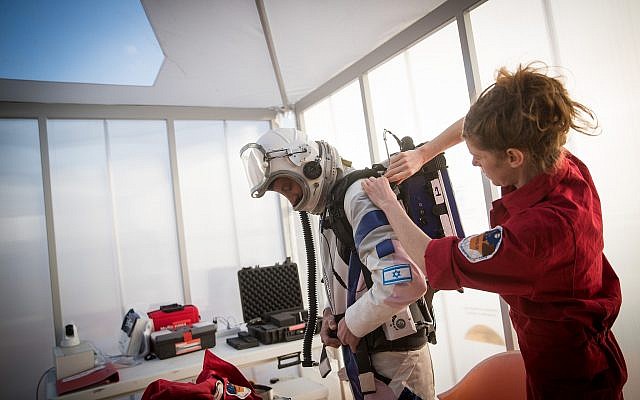 An Israeli scientist prepares to leave the D-MARS space station as part of a project simulates life in Mars, outside Mitzpe Ramon, Southern Israel, on February 18, 2018. (Yonatan Sindel/Flash90)

While in the simulation, the Ramonauts ate food from capsules, lived in confined quarters, and wore spacesuits whenever they had to leave their pod to conduct experiments.

The location in the Ramon crater was meant to simulate the Red Planet’s terrain, with “many similarities to the actual Martian environment in terms of geology, aridity and isolation,” according to organizers.

Wadi Rum, some 100 kilometers away in Jordan, was used to play Mars in the movie “The Martian,” and other Hollywood films, and is now marketed to tourists seeking a “Martian experience.”

Dr. Hillel Rubinstein, the field commander and head of the Israeli mission, described D-Mars as “a special and exciting experience, an amazing team,” adding that “even adults can continue to dream of distant stars.”

A tool, but not a panacea

But some say that dream may soon be a reality.

While a manned mission to Mars remains in the realm of science fiction, the recent launch of Space-X’s Falcon Heavy rocket has raised expectations. The launch “puts us in a completely different realm of what we can put into deep space, what we can send to Mars,” said Kartik Kumar, an analog astronaut taking part in a similar Mars simulation in the Omani desert. 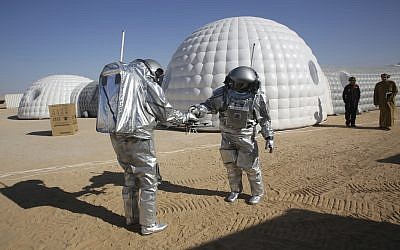 Public and private ventures are racing toward Mars — both former US president Barack Obama and SpaceX founder Elon Musk declared that humans would walk on the Red Planet in a few decades.

New challengers like China are joining the United States and Russia in space with an ambitious, if vague, Mars program. 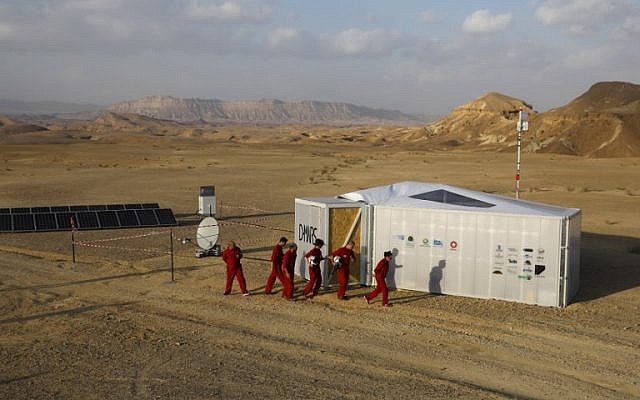 Faux space stations have been built underwater off the coast of Florida, on frigid dark deserts of Antarctica, and in volcanic craters in Hawaii, according to “Packing For Mars,” a favorite book among many Mars scientists, written by Mary Roach.

“Terrestrial analogs are a tool in the toolkit of space exploration, but they are not a panacea,” said Scott Hubbard, known as “Mars czar” back when he led the US space agency’s Mars program. Some simulations have helped developed cameras, rovers, suits and closed-loop life-support systems, he said.

NASA used the Mojave Desert to test rovers destined for the Red Planet but they also discovered much about how humans can adapt. 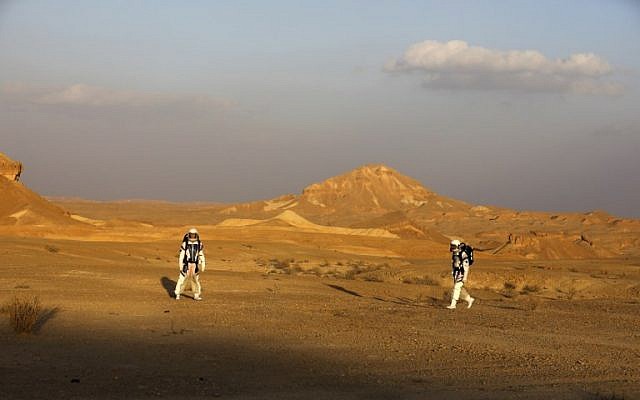 Israeli analog astronauts on their mission on the D-MARS Project on February 18, 2018. (AFP / MENAHEM KAHANA)

“Human’s adaptability in an unstructured environment is still far, far better than any robot we can send to space,” Hubbard said, adding that people, not just robots, are the key to exploring Mars.

However, there remain so many unknowns that simulations “are not in any way a replacement for being there,” Hubbard said. 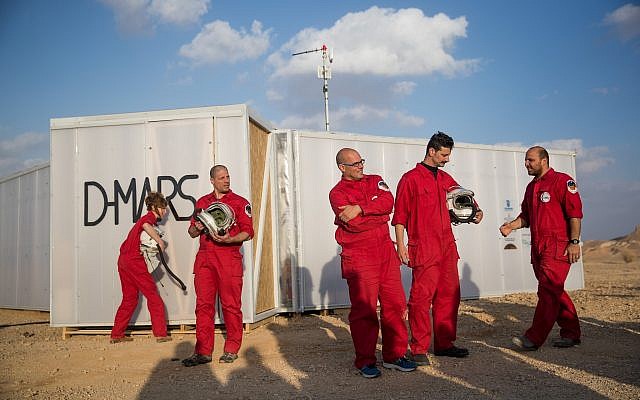 Israeli scientists simulate life on Mars in the Negev

Six scientists emerged from analog habitat after four days of isolation as part of a first-ever series of studies designed to simulate life on Mars. 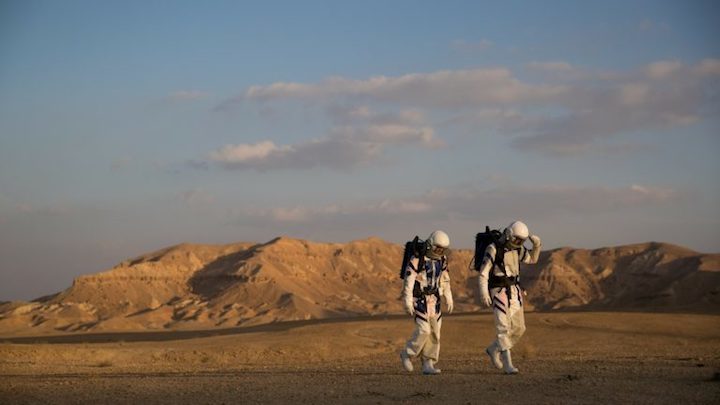 Mitzpeh Ramon is thought to be one of very few isolated areas in the world that have conditions relatively similar to Mars. Photo by Yonatan Sindel/FLASH90

In a secret, isolated location near the town of Mitzpeh Ramon, six Israeli pioneers took part in a four-day journey of exploration that simulated an actual mission on the surface of Mars.

The participants, nicknamed the “Ramonauts,” completed the mission on February 18 after several days of experiments held in D-MARS (Desert Mars Analog Ramon Station). The mission was the first of its kind in Israel and is part of a series of planned analog expeditions to Mars, designed to investigate and simulate possible life on the Red Planet in the near future.

“Israel is already leading in satellites but the technologies that we have here in Israel can create an incubator for technologies for space exploration, not only in near-Earth missions,” said Hillel Rubinstein, the postdoctoral fellow at Ben-Gurion University of the Negev who served as field commander and head of the mission. “This is only the first mission; we hope to have many missions in the future.”

As part of the collaboration between the Israel Space Agency and the Austrian Space Forum, scientific experiments were conducted during the expedition to investigate satellite communications, 3D printing capabilities, signs of life in soil, cosmic radiation measurements, and psychological effects of isolation. 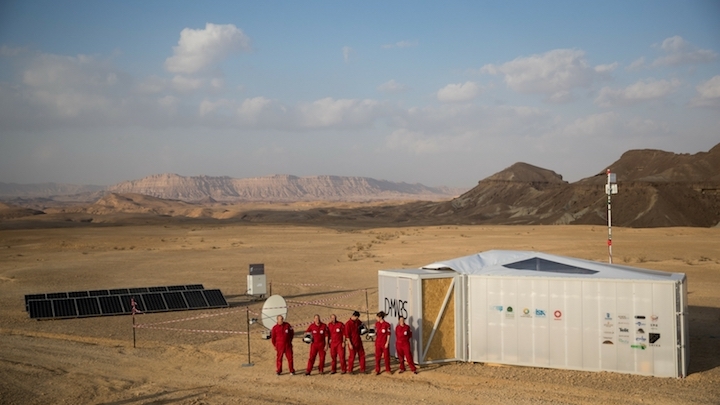 The rugged terrain of the Ramon Crater was chosen as an ideal backdrop for experimentation due to its seclusion and similarities in terms of land structure, geology, aridity and appearance to Mars. Such similar conditions are difficult to find in other areas of the world, the Science Ministry says.

Reut Sorek-Abramovich, the mission’s science officer responsible for collecting soil samples for experimentation, said although the analog environment lacks Mars’ famously red appearance due to the absence of oxidized iron, other types of minerals found in the area, such as basalt and clay, are very similar to those on Mars. The changes in temperature are also comparable to what you would find in certain areas on Mars, she said.

Ramonauts who participated in the experiments also include Prof. Guy Ron, a nuclear physics expert at the Hebrew University of Jerusalem; Jacqueline Fay, an astronomy tour guide and director of the Mitzpeh Ramon Music Center; Nadav Kushner, social worker and certified first-responder, and Alon Shikar, architect and lecturer at the Technion-Israel Institute of Technology in Haifa.

During the simulation, life in D-MARS was aimed at testing the habitat design, the spacesuits, the communication system and work-flows, the organizers said.

Space suits designed exclusively for the mission by Israeli fashion designer Alon Livne were worn by the crew for exploration and research outside of the habitat, known as extravehicular activity (EVA) in the space world. The fashionable suits feature life-support systems, a helmet, gloves and special shoes. 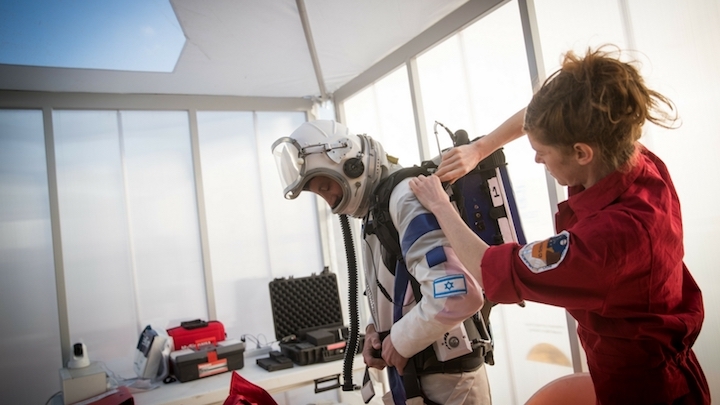 Architect Alon Shikar dressed in a space suit as he prepares to leave the space station. Photo by Yonatan Sindel/FLASH90

Ramonauts ate mostly freeze-dried food and drank 3 liters of water per day, said Kushner, who looked after the medical and dietary demands of the crew.

Solar panels outside the structure powered the habitat, which was designed to be fully collapsible and transportable. Design and construction of the D-MARS habitat were conceived as part of a course led by Shikar and architect Moshe Zagai at the Technion.

“I’m an architect but also an urban designer, so it was important to create this building with the ability to connect to other buildings,” said Shikar, who owns a private architecture and design firm. “What we have here is only one unit but it can be connected to five other units, creating an environment which can be added to all the time.” 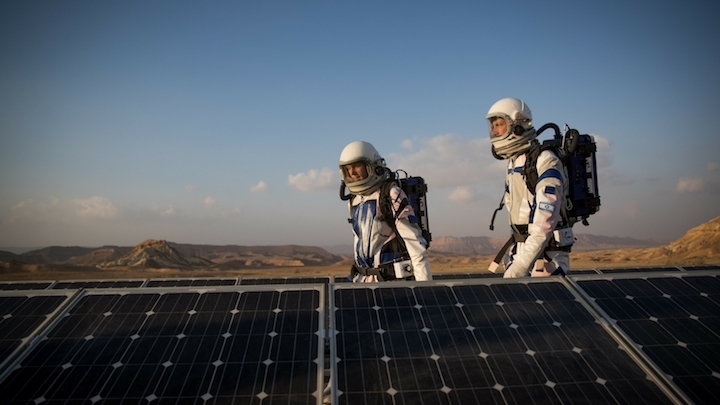 Though the habitat was constructed with little budget and time, Shikar said he hopes to evolve the design into a huge complex for future collaboration on Mars exploration and research.

“We wanted to prove that this is the best facility for such missions so that everyone who wants to send something to Mars, for example, can test it here,” said Rubinstein.

More analog expeditions are scheduled for the near future, including one mission that includes high school students from the Rehovot-based Davidson Institute of Scientific Education’s Astronaut School. The Austrian Space Forum is expected to come to Israel in 2020 for further collaboration, said Shikar.