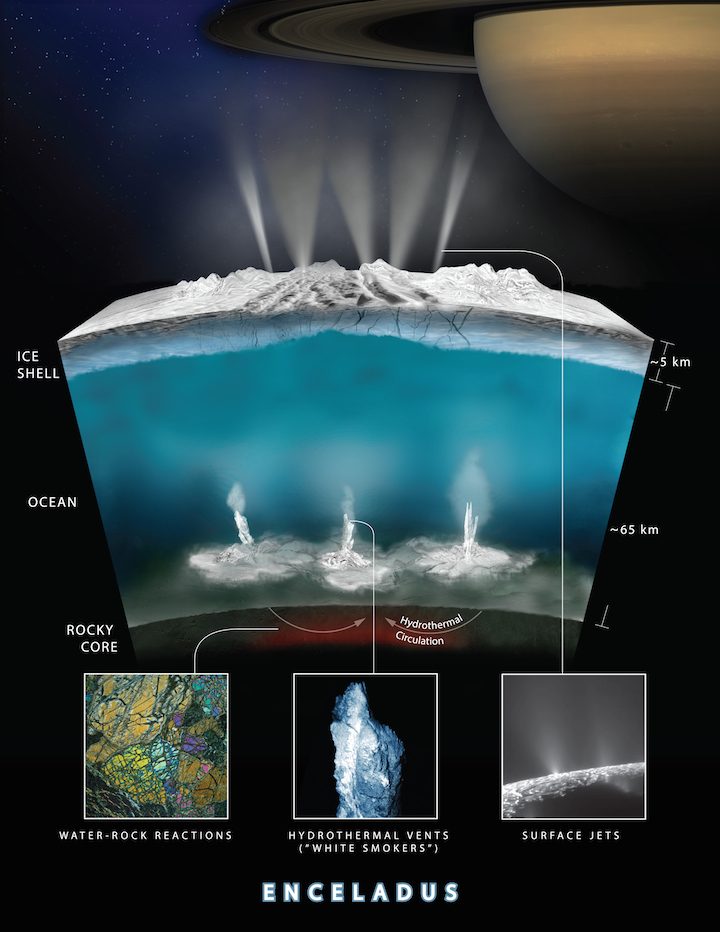 The Cassini spacecraft detected hydrogen in the plume of gas and icy material spraying from Enceladus during its deepest and last dive through the plume on Oct. 28, 2015. This graphic illustrates a theory on how water interacts with rock at the bottom of the moon’s ocean, producing hydrogen gas. A Goddard team wants to develop an instrument that would reveal even more details about the hydrothermal vents and perhaps help answer if life exists on this ocean world.
Credits: NASA/JPL-Caltech/Southwest Research Institute
-

NASA scientists and engineers have conceived and plan to build an ambitious submillimeter-wave or radio instrument to study the composition of geysers spewing water vapor and icy particles from the south pole of Saturn’s small moon, Enceladus.

SELFI is being designed to measure traces of chemicals in the plumes of water vapor and icy particles that emanate from fissures, also known as tiger stripes, on Enceladus, Saturn’s sixth largest moon. By studying the plumes, scientists believe they can extrapolate the composition of the ocean that lies beneath the moon’s icy crust and its potential to host extraterrestrial life.

Enceladus has intrigued scientists since NASA’s recently ended Cassini mission discovered the plumes that continuously spew particles, water vapor, carbon dioxide, methane, and other gases from about 100 sites on the moon’s surface. Although scientists initially thought that Enceladus was frozen solid, Cassini data revealed a slight wobble in the moon’s orbit that suggests the presence of a global ocean beneath the ice. Saturn’s tidal forces appear to pull and squeeze Enceladus, generating enough heat to hold water liquid in the interior and crack the icy shell. This forms fissures from which jets of water spray into space.

“Submillimeter wavelengths, which are in the range of very high-frequency radio, give us a way to measure the quantity of many different kinds of molecules in a cold gas. We can scan through all the plumes to see what’s coming out from Enceladus,” Chin said. “Water vapor and other molecules can reveal some of the ocean’s chemistry and guide a spacecraft onto the best path to fly through the plumes to make other measurements directly.”

“Molecules such as water and carbon monoxide, and others, are like little radio stations that broadcast on very specific frequencies that say, ‘hey, I’m water, I’m carbon monoxide,’” Chin continued, adding that a submillimeter spectrometer sensitive to these wavelengths is like tuning to a radio station with a specific molecular call-sign. “The spectral lines are so discrete that we can identify and quantify chemicals with no confusion whatsoever,” added Paul Racette, a Goddard engineer who serves as the effort’s chief systems engineer.

Used in space science across all wavelength or frequency bands, spectrometers can analyze the chemical composition of gases and solids in planets, stars, comets, and other targets, telling scientists much about their physical properties. Tuning into the submillimeter band is relatively new due to the complexity of building submillimeter-sensitive instruments.

With NASA research-and-development funding, Chin and his team are increasing the instrument’s sensitivity with an amplifier to boost the signal in the region around the 557 GHz frequency that has the strongest signal from water. This will improve the ability to measure even vanishingly small quantities of water and traces of other gases, even at the cold temperatures, and explore the whole system of surface vents on Enceladus, Racette said.

The team also is creating a more energy-efficient and flexible radio frequency (RF) data-processing system and a sophisticated digital spectrometer for the RF signal. The digital spectrometer will employ high-speed programmable circuitry to convert RF into digital signals that can be analyzed to measure the plumes’ gas quantities, temperatures, and velocities.

Because of these enhancements, SELFI will be able to simultaneously detect and analyze 13 molecular species, including water in various isotopic forms as well as methanol, ammonia, ozone, hydrogen peroxide, sulfur dioxide, and sodium chloride, the table salt chemical that makes Earth’s oceans salty.

“SELFI is really new,” Chin said, adding he believes the team can sufficiently improve the instrument to propose for a future mission. “This is one of the most ambitious submillimeter instruments ever built.”