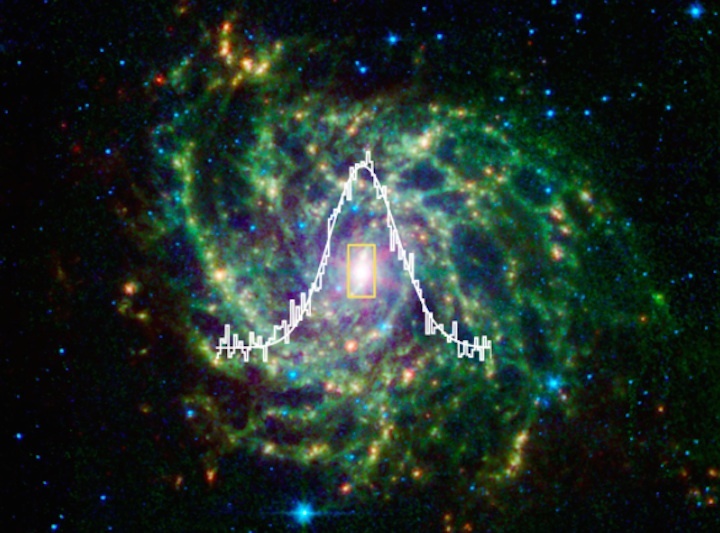 An international team of researchers used NASA’s Stratospheric Observatory for Infrared Astronomy, SOFIA, to make maps of the ring of molecular clouds that encircles the nucleus of galaxy IC 342. The maps determined the proportion of hot gas surrounding young stars as well as cooler gas available for future star formation. The SOFIA maps indicate that most of the gas in the central zone of IC 342, like the gas in a similar region of our Milky Way Galaxy, is heated by already-formed stars, and relatively little is in dormant clouds of raw material.

At a distance of about 13 million light years, galaxy IC 342 is considered relatively nearby. It is about the same size and type as our Milky Way Galaxy, and oriented face-on so we can see its entire disk in an undistorted perspective. Like our galaxy, IC 342 has a ring of dense molecular gas clouds surrounding its nucleus in which star formation is occurring. However, IC 342 is located behind dense interstellar dust clouds in the plane of the Milky Way, making it difficult to study by optical telescopes.

The team of researchers from Germany and the Netherlands, led by Markus Röllig of the University of Cologne, Germany, used the German Receiver for Astronomy at Terahertz frequencies, GREAT, onboard SOFIA to scan the center of IC 342 at far-infrared wavelengths to penetrate the intervening dust clouds. Röllig’s group mapped the strengths of two far-infrared spectral lines – one line, at a wavelength of 158 microns, is emitted by ionized carbon, and the other, at 205 microns, is emitted by ionized nitrogen.

The 158-micron line is produced both by cold interstellar gas that is the raw material for new stars, and also by hot gas illuminated by stars that have already finished forming. The 205-micron spectral line is only emitted by the hot gas around already-formed young stars. Comparison of the strengths of the two spectral lines allows researchers to determine of the amount of warm gas versus cool gas in the clouds.

Röllig’s team found that most of the ionized gas in IC 342’s central molecular zone (CMZ) is in clouds heated by fully formed stars rather than in cooler gas found farther out in the zone, like the situation in the Milky Way’s CMZ. The team’s research was published in Astronomy and Astrophysics, volume 591.

“SOFIA and its powerful GREAT instrument allowed us to map star formation in the center of IC 342 in unprecedented detail,” said Markus Röllig of the University of Cologne, Germany, “These measurements are not possible from ground-based telescopes or existing space telescopes.”

Researchers previously used SOFIA’s GREAT spectrometer for a corresponding study of the Milky Way’s CMZ. That research, published in 2015 by principal investigator W.D. Langer, et. al, appeared in the journal Astronomy & Astrophysics 576, A1 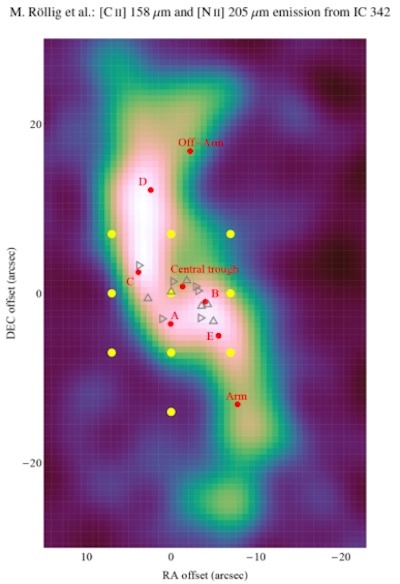