In a major space policy decision, Russia will promise to join a NASA-led effort to build an international human outpost in the vicinity of the Moon. Russian industry sources told Popular Mechanics that the head of Roscosmos State Corporation, Igor Komarov, is expected to announce the news next week during a meeting with other space agencies at the 68th International Astronautical Congress in Adelaide, Australia.

NASA and its partner agencies plan to begin the construction of the modular habitat known as the Deep-Space Gateway in orbit around the Moon in the early 2020s. It will become the main destination for astronauts for at least a decade, extending human presence beyond the Earth's orbit for the first time since the end of the Apollo program in 1972. Launched on NASA's giant SLS rocket and serviced by the crews of the Orion spacecraft, the outpost would pave the way to a mission to Mars in the 2030s.

Partners on the International Space Station program including the European, Canadian, and Japanese space agencies have been conducting quiet but intensive consultations with NASA about their contributions to the near-lunar station. But Roscosmos, which played a key role in building the ISS, has taken a back seat until now. 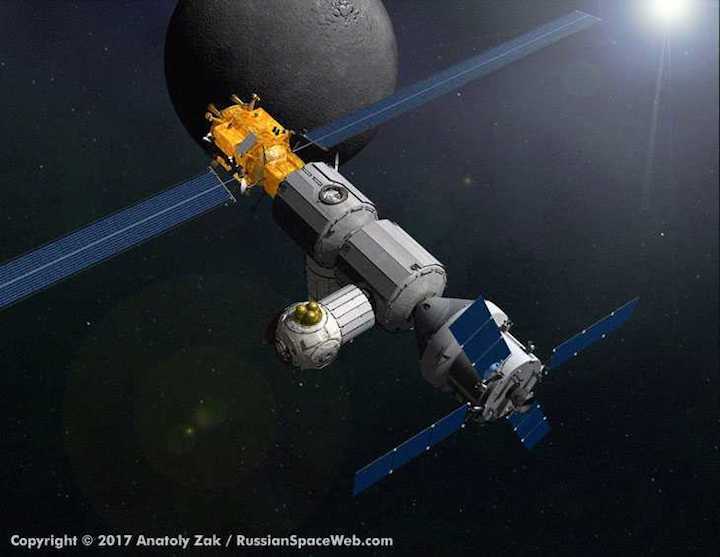 According to industry sources, some Russian space leaders saw the U.S.-led near-lunar station as a distraction from Kremlin's main goal of sending Russian cosmonauts to the surface of the Moon and building a long-term base. Roscosmos was also considering an indigenous Earth-orbiting space station to follow up the ISS, to be maintained either in parallel with its lunar exploration effort or as a backup strategy if the lunar idea was too expensive.

However, the TsNIIMash research institute, Russia's key space strategy think tank, concluded the agency would not be able to fund the Earth-orbiting space station and the lunar program at the same time. Moreover, the latest Russian plans for the development of a super-heavy rocket powerful enough to carry cosmonauts to the Moon were recently pushed back toward the very end of the 2020s.

Under these circumstances, Roscosmos probobaly realized that it would be beneficial to continue cooperating with its ISS partners on the near-lunar outpost. In exchange to providing modules and other hardware, the participating agencies could send their astronauts to ride NASA's Orion spacecraft to the near-lunar station. NASA also promised to make the near-lunar base available not only for preparing a trip to Mars but also for mounting expeditions to the lunar surface itself. 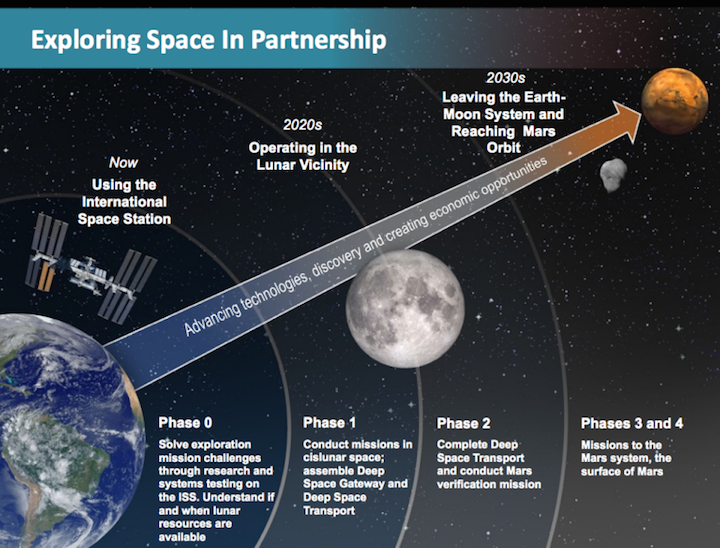 Although, the outpost's egg-shaped orbit will be less than ideal for sorties to the Moon, the partners expressed interest in providing a lander, which could shuttle between the orbiting facility and the lunar surface. If Russia joins the program, it could contribute its extensive expertise in the development of the lunar landers. During the past decade, engineers at RKK Energia, Russia's prime developer of piloted spacecraft, has been studying possible lunar landers and other Moon-based architecture.

The Russian space industry could also provide its rockets, such as the operational Proton booster, the new-generation Angara and the prospective super-heavy rocket to deliver cargo and eventually its own crews to the near-lunar station.

In the past two months, Russian space officials held a series of crucial meetings on the future of the nation's space program. On September 7, during the Eastern Economic Forum in Vladivostok, Igor Komarov told the official TASS news agency that Roscosmos was expecting very important negotiations with its partners. "We will discuss what we will do on the Moon, near the Moon, and the lunar orbital station," Komarov was quoted as saying, "It is important how (near-lunar station) will develop, what would be the contribution from each country, and what will be our participation."

During the same event, the Russian president Vladimir Putin expressed general support for working with the U.S. toward human exploration of deep space. "In particular, there is interest in joint (efforts) with the Americans in the exploration of Mars by 2030," Putin said.