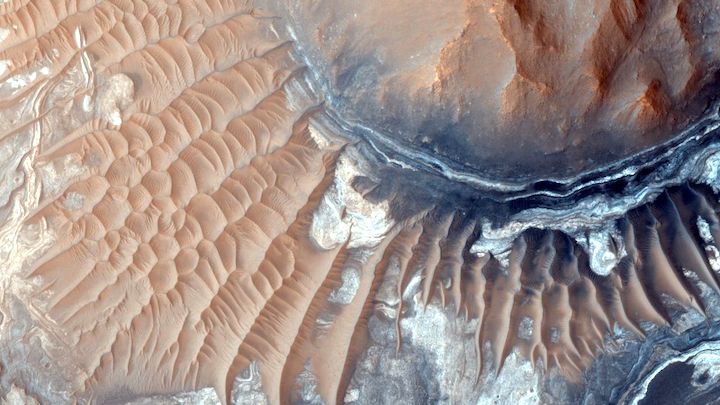 A region of the Noctis Labyrinthus formation on Mars, imaged by the HiRise camera on NASA's Mars Reconnaissance Orbiter. ASA/JPL/University of Arizona

The orbiter for China’s 2020 Mars mission will carry a powerful high-resolution camera which will boost understanding of the Red Planet and help with planning for future missions.

China will launch its first independent interplanetary mission in summer 2020 with a Long March 5 rocket, ambitiously attempting to send the orbiter to the Red Planet together with a lander and rover in one go.

Aboard the orbiter will be the Mars High-resolution Camera (MHC), which will have a maximum resolution of 0.5m per pixel at an altitude of 260 km above the Martian surface - the expected periapsis, or low point in the orbit - making it comparable to NASA’s HiRise imager.

While HiRise, currently in orbit aboard the Mars Reconnaissance Orbiter (MRO), can return images at a greater resolution of 25 cm per pixel, China’s MHC will offer larger areal coverage, with a 9 km swath versus a 6 km swath for HiRISE.

The specifications for the 40 kg MHC imager were presented at the international forum on Lunar and Deep Space Exploration in Beijing this week.

The instrument is being developed by the Changchun Institute of Optics, Fine Mechanics and Physics (CIOMP) in the country's northeast province of Jilin, which operates under the Chinese Academy of Sciences (CAS). The MHC is currently in the manufacturing and alignment phase.

Dr Tanya Harrison, a planetary scientist and Director of Research for Arizona State University's Space Technology and Science, says the MHC will make an important contribution.

"This will be a great asset to have in orbit at Mars to increase our high resolution coverage to look at things like change monitoring, including phenomena such as dune movement, gully activity, polar avalanches, and future landing site characterisation," Dr Harrison says.

A Mars sample return, to follow in the late 2020s, is also part of China's deep space exploration roadmap, and the MHC would be invaluable in analysing candidate landing sites.

"It's not only a good compliment to the imagers aboard Mars Reconnaissance Orbiter and ESA's ExoMars Orbiter, but it will be good to have another high-res camera in orbit at the time the Mars 2020 [NASA mission] is operating since MRO is over a decade old at this point," Dr Harrison points out.

HiRISE being prepared before it is shipped for attachment to the MRO spacecraft. NASA/JPL

HiRise has returned over a quarter of a million images, many of them stunning.

One issue yet unclear is if and how China will release and share the images publicly in a timely manner.

NASA's Opportunity and Curiosity rovers are still working on the Martian surface and returning great science, and they will be joined by a number of new missions due to launch in the 2020 window.

Potentially touching down in early 2021 will be NASA's Mars 2020 rover, the Chinese rover, the ExoMars 2020 rover involving the European Space Agency and Russia, and an Indian rover - Mangalyaan 2 - following up its 2013 success with the Mars Orbiter Mission.

China's mission will include 13 payloads, including a ground penetrating radar on the rover. A similar instrument allowed China’s Yutu rover to image around 400m below the lunar surface, making intriguing discoveries about the composition and history of the Moon, such as evidence of volcanic floods.

Another instrument expected on the orbiter is a spectrometer calibrated for detecting methane, the presence of which may indicate biological processes occurring on Mars.

China successfully soft-landed on the Moon in December 2013, and will use some of the experience and technology from the Chang'e-3 mission for the much trickier Martian landing.

Ye Peijian, a senior figure within China's space programme, states that the greater velocity, the thin but hazardous Martian atmosphere, and the remoteness of the planet pose addition hurdles.

China in 2016 tested a supersonic parachute which will be used to slow the lander's descent to the surface.

As such Zhang Rongqiao, chief architect of the mission, told press in Beijing on Wednesday that, "the Mars exploration program is well underway."