An Asteroid That Split in Two 5,000 Years Ago Is Spouting a Comet Tail

Astronomers categorize the minor bodies in the solar system according to their location and physical composition. Comets are a loose collection of ice and dust that fall in toward the Sun from beyond the orbits of the major planets, and grow long tails of dust and gas along the way. Asteroids are rocky or metallic and are relegated to a zone between Mars and Jupiter. But nature isn't that tidy. The Hubble Space Telescope photographed a pair of asteroids orbiting each other that have a tail of dust, which is definitely a comet-like feature. The odd object, called 2006 VW139/288P, is the first known binary asteroid that is also classified as a main-belt comet. Roughly 5,000 years ago, 2006 VW139/288P probably broke into two pieces due to a fast rotation.

NASA’s Hubble Space Telescope helped an international team of astronomers find that an unusual object in the asteroid belt is, in fact, two asteroids orbiting each other that have comet-like features. These include a bright halo of material, called a coma, and a long tail of dust.

Hubble was used to image the asteroid, designated 300163 (2006 VW139), in September 2016 just before the asteroid made its closest approach to the Sun. Hubble’s crisp images revealed that it was actually not one, but two asteroids of almost the same mass and size, orbiting each other at a distance of 60 miles.

Asteroid 300163 (2006 VW139) was discovered by Spacewatch in November 2006 and then the possible cometary activity was seen in November 2011 by Pan-STARRS. Both Spacewatch and Pan-STARRS are asteroid survey projects of NASA’s Near Earth Object Observations Program. After the Pan-STARRS observations it was also given a comet designation of 288P. This makes the object the first known binary asteroid that is also classified as a main-belt comet.

The more recent Hubble observations revealed ongoing activity in the binary system. “We detected strong indications for the sublimation of water ice due to the increased solar heating — similar to how the tail of a comet is created,” explained team leader Jessica Agarwal of the Max Planck Institute for Solar System Research, Germany.

The combined features of the binary asteroid — wide separation, near-equal component size, high eccentricity orbit, and comet-like activity — also make it unique among the few known binary asteroids that have a wide separation. Understanding its origin and evolution may provide new insights into the early days of the solar system. Main-belt comets may help to answer how water came to a bone-dry Earth billions of years ago.

The team estimates that 2006 VW139/288P has existed as a binary system only for about 5,000 years. The most probable formation scenario is a breakup due to fast rotation. After that, the two fragments may have been moved further apart by the effects of ice sublimation, which would give a tiny push to an asteroid in one direction as water molecules are ejected in the other direction.

The fact that 2006 VW139/288P is so different from all other known binary asteroids raises some questions about how common such systems are in the asteroid belt. “We need more theoretical and observational work, as well as more objects similar to this object, to find an answer to this question,” concluded Agarwal.

The research is presented in a paper, to be published in the journal Nature this week.

The Hubble Space Telescope is a project of international cooperation between NASA and ESA (European Space Agency). NASA’s Goddard Space Flight Center in Greenbelt, Maryland, manages the telescope. The Space Telescope Science Institute (STScI) in Baltimore, Maryland, conducts Hubble science operations. STScI is operated for NASA by the Association of Universities for Research in Astronomy, Inc., in Washington, D.C. 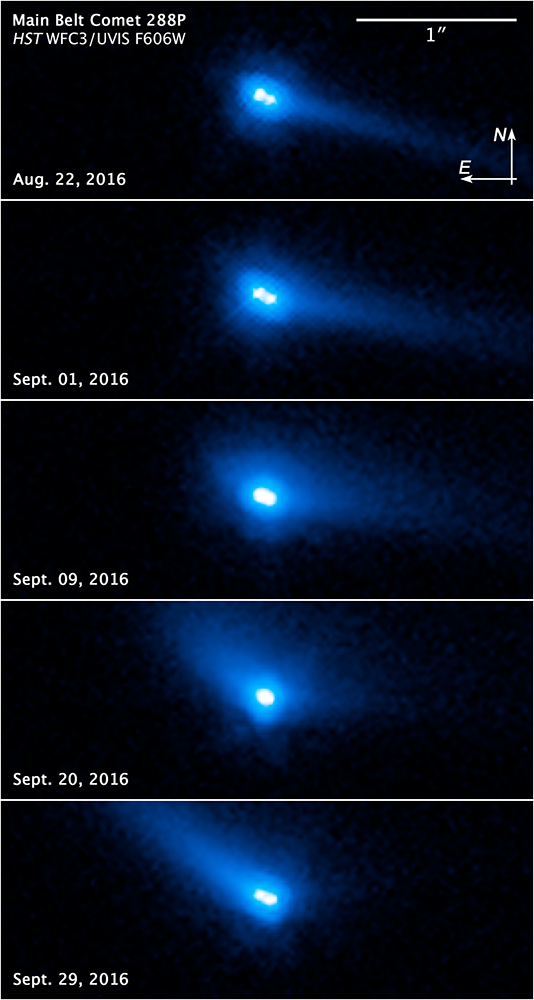 Astronomers have identified a weird pair of orbiting asteroids, called 288P, as the first known binary asteroid also classified as a comet. 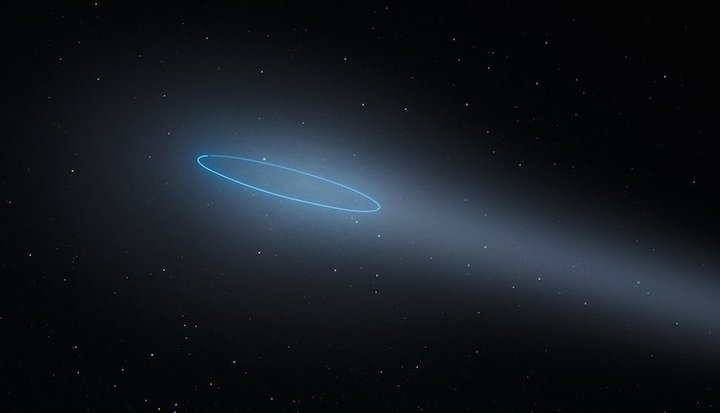 Astronomers recently spotted two space rocks behaving strangely. As the asteroids orbited each other, both of them appeared to be shedding material just like a comet does — observations revealed a coma around the objects as well as a long tail of material.

The group have identified this weird system, called 288P, as “the first known binary asteroid also classified as a comet.” There are a few select examples of single asteroids shedding water and dust and leaving behind a comet-like tail, but it’s the first time two of these objects were seen orbiting each other.

288P was first discovered in November 2006 by the astronomical survey Spacewatch. At the time, it was thought to be an asteroid and called Asteroid 300163 (2006VW139). In 2011, the Pan-STARRS telescope spotted cometary activity and the object was renamed 288P.

Astronomers didn’t know that 288P was two objects until the Hubble Space Telescope observed it in September 2016, though the team suggested it could be two objects in November 2015.

From the objects’ orbit, astronomers could see that 288P originally came from the asteroid belt. Astronomers expect that in the asteroid belt, water ice can only exist for billions of years if it is protected by a covering of dust, perhaps a few meters thick. But 288P sheds water ice as it approaches the sun, indicating that the dust layer is eroded or lost.

This artist’s impression shows the binary main-belt comet 288P. From a distance the comet-like features of the system can clearly be seen: among them, the bright coma surrounding both components of the system and the long tail of dust and water pointing away from from the sun. Only a closer look reveals the two components of the system: two asteroids circling each other on an eccentric orbit. |ESA/Hubble, L. Calçada, M. Kornmesser

“We detected strong indications of the sublimation of water ice due to the increased solar heating — similar to how the tail of a comet is created,” said Jessica Agarwal, lead author and a scientist at the Max Planck Institute for Solar System Research in Germany, in a statement.

“The most probable formation scenario of 288P is a breakup due to fast rotation,” she added, noting that the team estimates that the breakup happened only 5,000 years ago. “After that, the two fragments may have been moved further apart by sublimation torques.”

This time-lapse video, assembled from a set of ESA/NASA Hubble Space Telescope images, reveals two asteroids with comet-like features orbiting each other. The asteroid pair, called 288P, was observed in September 2016, just before the asteroid made its closest approach to the sun. |NASA, ESA, and J. Agarwal (Max Planck Institute for Solar System Research)

The new observations of 288P came shortly before the asteroid pair made its closest approach to the sun. Astronomers looked at 288P with the Hubble and saw two objects, separated by about 100 kilometers (60 miles) and orbiting each other. The asteroids are almost the same mass and size.

“Understanding the origin and evolution of main-belt comets — asteroids orbiting between Mars and Jupiter that show comet-like activity — is a crucial element in our understanding of the formation and evolution of the whole solar system,” says the European Space Agency’s Hubble Space Telescope page. “Among the questions main-belt comets can help to answer is how water came to Earth. Since only a few objects of this type are known, 288P presents itself as an extremely important system for future studies.”

Agarwal added that finding 288P was serendipitous, so it may be the only known object of its type for quite some time — making observations of it all the more important.

Astronomie - Comet or Asteroid? Hubble Discovers that a Unique Object is a Binary
1042 Views
Created with page4