July 6-12, 1952; Elizabeth, New Jersey. 11:00 p.m. Witness: Charles Muhr. Four pictures taken of some indistinct light which was admit- tedly not seen visually, but which appeared on the negatives.1

For those familiar with evaluating UFO photographs, one of the biggest red flags is when the photograph presents a photograph of a UFO but then states they did not see the UFO when the picture was taken.

The report in the Blue Book file is interesting and presents us with some very puzzling information. The information came to Blue Book’s attention when the headquarters of the first army sent a report to them regarding the photographs. They were contact- ed, on 19 August, by an owner of a photograph store, who saw some unusual photographs one of their customers had turned in for developing.2 The photographer took the photographs at 2300 local time but he did not remember the date. He only knew it was the week of 6-12 July and he was trying to photograph the moon. The exposure times for the photographs were:

About the only information we have regarding the photographs was the photographer was point his camera towards the east on 6-12 July around 2300 EDT (evidence indicates DST was in effect for New York) and he was attempting to photograph the moon. The azimuth was anywhere between an eastern to southern direction.

The next question is the weather. Weather underground indicates that the nights of 8 and 9 July had light rain showers.3 Con- sidering the moon rising late on 11 and 12 July, and based on the location of the moon in the photographs, it seems likely that it was probably the night of the 6th or 7th.

We don’t know too much about the equipment other than a Mercury 2 camera was used and the
lens was set at F2.7. A check of the Mercury 2 camera indicates it produced “half-frames” on a roll

of 35 mm film. This means a 36-exposure roll was capable of producing 72 photographs. According to this web site, the lens was a 35mm lens.5 We don’t know the film but standard black and white films in 1952 had a speed of about ASA 50-100. 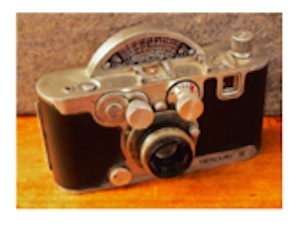 What do the images show?

There are actually two different targets in these photographs.6 The first appears to be three lights in a triangle that the photogra- pher recorded. One of the photographs has the lights streaking around. This appears to be the photographer making a mistake on his first exposure. The tripod was probably unstable and, as a result, the lights trailed around when the camera moved. The sec- ond image is the same three lights that are stationary. We are told the exposure times were ten and fifteen minutes. I find this hard to accept. At F2.7, with an ISO of 50, the sky would have been illuminated by the nearby moon and the film would show this. The images are not that bright indicating they were not taken under the conditions state or the exposure times were wrong. Consider- ing the fact that the source of the information appears to have come from the developer and not directly from the photographer, I consider it likely that the exposure time was in seconds and not minutes. This seems to be confirmed by the other two photographs,

which supposedly show the moon. A 20-25 minute exposure of the full moon would have been overexposed more than what is seen in the photographs. The full moon is a very bright object and would have washed out the film in 20-25 minutes.

In my opinion, the object in the moon photographs are internal reflections in the camera. The other two photographs showing three lights are harder to evaluate. Measurements indicate the lights do not change position between the two photographs (the BB file rotates one of them 90 degrees). It is a good possibility that these were photographs of some stationary lights.

The most important fact to consider is that the photographer had no idea he had photographed something unusual until the film was developed. Additionally, it was the photo store owner, not the photographer, who decided to contact the Army about what was in them. Considering all the news media coverage about UFOs in the northeast in July, it is not surprising that somebody as- sumed the photographs showed something unusual. While the three lights can be considered “unknowns” , there is nothing here to indicate these images show something “unknown to science”. These should be reclassified as internal reflections for the moon images and “insufficient information” for the three lights since we have no idea what the photographer was taking a picture of and, apparently, neither did he.