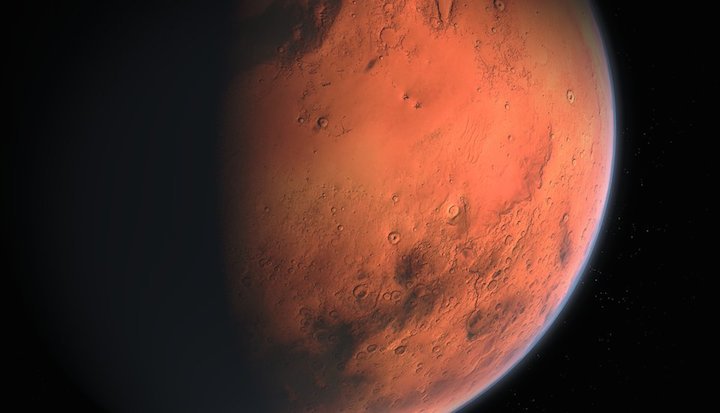 Toxic Martian Soil May Be Deadly to Organic Microbial Life

Searching for life on Mars was never going to be easy, but new research suggests that the Martian environment is likely even more harmful to living cells than previously imagined.

There’s some good news and some bad news in the latest research about potential life on Mars.

Researchers from Edinburgh University in the UK found that when certain chemicals on the Red Planet’s surface react with ultraviolet radiation from the sun, a toxic compound can result that can kill some bacteria.

This is great news for those worried about planetary protection — the “prime directive” of any interplanetary mission — to prevent biological contamination of a celestial body from spacecraft visiting from Earth.

But would that same chemical reaction also kill bacteria in the Martian soil, rendering it sterile and lifeless?

The chemical in the spotlight in this research is perchlorate, an ion of chlorine and oxygen. It was discovered on Mars by the Phoenix lander mission in 2008, and has also been recently (and frequently) detected by the Mars Reconnaissance Orbiter. It found downhill flows, called recurring slope lineae, which appear as dark — and potentially wet and briny — streaks that are seen from time to time on Martian gullies and crater walls.

Perchlorates are found naturally on Earth at such places as Chile's arid Atacama Desert. The compounds are quite stable and do not destroy organic material under normal circumstances, but researchers in 2010 found that soil with perchlorates oxidates when it is heated, which is bad for any organics that might be in the soil.

Finding perchlorates on Mars has been considered an important piece of the puzzle in trying to understand the findings from a previous mission, the Viking Mars landers in 1976, and whether or not that mission may have found carbon-based chemical building blocks of life. The two Viking landers took samples of Martian soil and heated them to look for organics. All they found were chlorine compounds attributed to contamination, but subsequent research suggested that the Viking probes' heat-treatment may have generated these chlorine compounds from naturally occurring Martian organics, destroying them in the process.

Heating perchlorates would have the same effect.

Perchlorates “could sit there in the Martian soil with organics around it for billions of years and not break them down, but when you heat the soil to check for organics, the perchlorate destroys them rapidly,” explained Chris McKay, a scientist with NASA's Ames Research Center, upon the release of a 2010 study he coauthored that reanalyzed the results of Viking's tests for organic chemicals in Martian soil.

Now, researchers Jennifer Wadsworth and Charles Cockell from Edinburgh University’s UK Centre for Astrobiology report in a new paper that it doesn’t take a special heating instrument on board a spacecraft to set off the reaction from perchlorates. It might happen naturally from the sun.

The scientists investigated the potential reactivity of perchlorates and their effect on Bacillus subtilis, a bacterium found on spacecraft that is also common in soils and rocks.

They exposed soil from the Atacama Desert that contained perchlorates to UV light in environmental conditions mimicking those on Mars. Their experiments showed that when magnesium perchlorate was exposed to UV radiation similar to that on Mars, it became capable of killing bacteria much more effectively than UV light alone.

At concentrations of perchlorate similar to those found on the Martian surface, cells of B. subtilis quickly died.

The study also suggested that the effect of perchlorates can be exacerbated by two other types of chemicals found on the Martian surface: iron oxides and hydrogen peroxide. The team performed additional experiments where all three were present, and the combination led to a more than 10-fold increase in death of bacterial cells compared with perchlorates alone.

“Iron oxides absorb strongly in the biologically damaging UV radiation spectrum,” Wadsworth and Cockell wrote in their paper, saying the inhospitable conditions on Mars are caused by a “toxic cocktail of oxidants, iron oxides, perchlorates and UV irradiation.”

Their research could have implications for potential contamination from robotic and human exploration of Mars, as well as how well humans could survive on the Red Planet.

But what about any bacteria or other potential life on Mars? It’s not beyond the realm of possibility that Martian microorganisms have evolved to suit their environment and are much hardier than Earthly bacteria. They could possibly subsist not on water, like life on Earth, but on a water and perchlorate solution, which wouldn’t freeze.

Wadsworth and Cockell noted that perchlorates can also act as catalysts in certain conditions, and that microbes on planets such Mars — as well as early Earth — are therefore “faced with this two-sided nature,” and are precariously poised between the beneficial effects and their damaging catalytic properties.