Researchers find out how bromine fits into Venusian chemistry 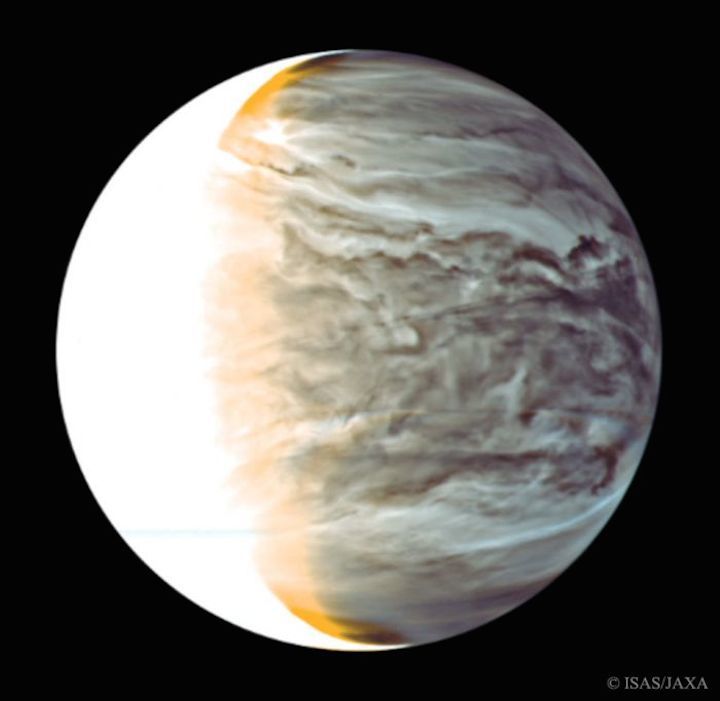 Bromine species, and hydrogen bromide (HBr) in particular, could play an important part in the photochemistry of the lower atmosphere of Venus. This conclusion was made by researchers from MIPT and the Space Research Institute of the Russian Academy of Sciences after comparing the data of Earth-based observations of Venus with the predictions of a photochemical model. The paper detailing their study was published in the journal Icarus.

Since the 1960s, numerous space probes have been sent to Venus. Because 17 out of 24 successful missions were launched by the Soviet Union, scientists dubbed it “the Russian planet.” Back in the middle of the 20th century, sci-fi writers imagined Venus as a habitable planet covered entirely by ocean, expecting that it would welcome future generations of earthlings. But the “morning star” had many surprises in store for its would-be colonists. The first Soviet probes that attempted to land on Venus were crushed by immense pressures in the lower atmosphere before they could reach the surface of the planet. Eventually, it became clear that Venus has a unique atmosphere, which is very dense near the surface and harbors terrific winds at higher altitudes. They blow at many times the speed of the planet’s rotation. Venus generates a great deal of scientific interest by virtue of its being so unusual and largely unexplored. Recent studies like this one further our understanding of the inner workings of this highly complex world.

The temperature of the surface of Venus and its lower atmosphere is extremely high: 460 degrees Celsius at the surface, and atmospheric pressure on Venus is 93 times that on Earth. Under these extreme conditions, rather peculiar compounds are formed and released into Venusian atmosphere, such as hydrogen chloride and hydrogen fluoride. The discovery of these species on Venus half a century ago was unexpected and surprising. That said, it would be reasonable to suppose then that hydrogen bromide — the next hydrogen halide — could also be found in Venusian atmosphere.

Vladimir Krasnopolsky and Denis Belyaev conducted their observations of Venus from one of the Mauna Kea observatories, which are leading astronomical research facilities based on the Big Island, Hawaii, at an elevation of 4.2 kilometers. The researchers used the 3-meter telescope of NASA’s Infrared Telescope Facility (IRTF), coupled with CSHELL, a high-resolution spectrograph with a spectral resolving power of about 40,000. To search for hydrogen bromide on Venus, the researchers observed the strongest spectral lines of this molecular species, whose associated wave numbers are 2605.8 and 2606.2 units per centimeter, which corresponds to a wavelength of roughly 3.8 micrometers. By analyzing 101 spectra of Venus and searching for hydrogen bromide lines in them, the astrophysicists came to a conclusion that the abundance of this species relative to other molecules in the cloud tops, at an altitude of 70 kilometers above the planet’s surface, does not exceed one part per billion.

“Retrieval of atmospheric parameters from spectroscopic data is far from trivial,” says Vladimir Krasnopolsky, the head of the Laboratory of Applied Infrared Spectroscopy at MIPT. “It is possible to infer the temperature of the atmosphere at a given altitude from spectral line profiles and widths. As for the abundance of a given molecule relative to other atmospheric species, it can be determined by comparing the intensity of its spectral line to the intensities of lines of other molecules whose concentrations are known.”

In 2012, Krasnopolsky created a photochemical model incorporating numerous components of the atmosphere of Venus. His model has now been updated to include the main photochemical processes involving bromine. According to the updated model, hydrogen bromide is roughly 300 times less abundant at 70-80 kilometers above the surface than at 60 kilometers due to its depletion by photolysis and reactions with atomic hydrogen and oxygen. Reanalysis of the observational data yielded an upper limit of between 20 and 70 parts per billion of hydrogen bromide below 60 kilometers. The relative abundances of various bromine species at different altitudes are shown in the figure below.

“Despite the estimated bromine abundance being so low, it could still be an important component of the atmosphere of Venus,” says Denis Belyaev, a senior researcher at the Space Research Institute, RAS. “Thermodynamic calculations based on the chemical kinetic model of Vladimir Krasnopolsky indicate that hydrogen bromide is the dominant bromine species in the lower atmosphere.”