Uranus’s magnetic field toggles on and off every day

The strange geometry of Uranus’s magnetic field means it opens and closes each time the planet spins, writes Andrew Masterson. 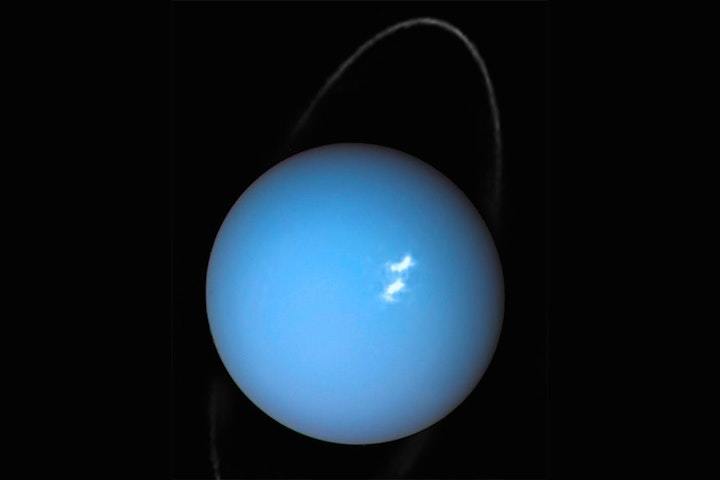 Uranus’s magnetosphere – the region surrounding the planet in which the magnetic field dominates – gets switched on and off every day, according to researchers at the Georgia Institute of Technology in the US.

In a paper published in the Journal of Geophysical Research: Space Physics, the scientists report that the magnetosphere flips between “open” and “closed” modes once every rotation of the planet.

When the system is in open mode, solar wind flows in, circulating across the planet. In closed mode, the magnetosphere forms a protective barrier, deflecting the wind back out into space.

To make their findings, the researchers, Xin Cao and Carol Paty, used data gathered by NASA’s Voyager 2 probes as it passed Uranus in 1986.

The information revealed a magnetosphere markedly different to that which surrounds the Earth.

On our planet, it aligns quite closely with the spin axis, which means it whirls around like a top. Because of that, the magnetosphere is always facing towards the sun. It flips between open and closed modes quite often, but irregularly, always in response to strong solar winds.

This mode switching, by the way, is one of the causes for the colourful auroras sometimes seen at extreme northerly and southern latitudes.

Uranus’s magnetosphere, in contrast, exhibits precise regularity in its mode changes. This, say the researchers, is because it lies at an angle of roughly 60 degrees to the planet’s spin axis, causing its interaction with incoming solar winds to vary dramatically during the 17 hours it takes for a full rotation.

“The magnetic field tumbles very fast, like a child cartwheeling down a hill head over heels. When the magnetised solar wind meets this tumbling field in the right way, it can reconnect and Uranus’s magnetosphere goes from open to closed to open on a daily basis.”

The researchers suggest the robust and regular changes to the magnetosphere may mean that the icy planet has spectacular auroras across its breadth every day.

However, given that the planet is 3,218,688,000 kilometres from Earth, even our best eye in the sky, the Hubble Space Telescope, is too far away to see any but the very brightest of them.

Irregular Uranus: the ice giant is topsy-turvy in more ways than one

Uranus has a "switch-like" magnetosphere that opens and closes due to the planet's complicated magnetic and rotational geometry. This is the conclusion of Xin Cao and Carol Paty from the Georgia Institute of Technology in the US, who have used data from Voyager 2 to model the icy planet’s unusual magnetic properties.

Most planets are surrounded by a magnetosphere – a plasma structure created by the planet's magnetic fields controlling the flow of cosmic charged particles. For Earth, the magnetic axis is almost aligned with the planet's spin axis, and the constant bombardment of electrically charged particles released by the Sun (known as solar winds) means the resulting magnetosphere has a bullet-like shape.

Usually, this structure is in a "closed" state – charged particles in the solar wind are directed away from Earth. However, it can "open" because of magnetic reconnection – a phenomenon that happens within plasmas, like the solar wind, because they have their own set of magnetic fields. When the magnetic-field lines inside a plasma get close to other field lines, the entire pattern changes and everything realigns into a new configuration. The process converts the stored energy of the magnetic field into heat and kinetic energy, which sends particles out along the field lines. This is how solar flares are created.

Magnetic reconnection can happen in Earth's magnetosphere when the solar wind changes direction due to solar storms. The realignment can open up gaps in the protective magnetosphere, allowing highly energetic cosmic particles to enter the atmosphere. This is one mechanism that creates spectacular auroras and disrupts satellites.

In contrast to Earth's relatively simple arrangement, Uranus has a particularly complex magnetic and rotational geometry that generates a dynamic magnetosphere. "Uranus is a geometric nightmare," says Paty. The ice giant has the most extreme axial tilt of all planets in the solar system, spinning on a near-horizontal axis. Furthermore, its magnetic axis is at a 59° angle to the spin axis and – adding insult to injury – does not go through the geometric centre of the planet.

To study the effects of this unusual arrangement on Uranus’s magnetosphere, Cao and Paty created a simulation using data from the only spacecraft to fly by Uranus, NASA's Voyager 2. The mission sped past the planet over 30 years ago, collecting only five days worth of data. The researchers found that the lopsided magnetic field tumbles asymmetrically during the planet's 17.24 h full rotation – causing rapid rotational change in field strength and orientation. "When the magnetized solar wind meets this tumbling field in the right way, it can reconnect, and Uranus’s magnetosphere goes from open to closed to open on a daily basis," explains Paty. As well as this "switch-like" mechanism, Cao and Paty also suggest that solar-wind reconnection (as on Earth) occurs upstream of Uranus’s magnetosphere, in its twisted tail.

Again unlike Earth, magnetic reconnection on Uranus can cause auroras at a range of latitudes. However, these are difficult to observe because the planet is nearly two billion miles away – even the Hubble Space Telescope only gets a faint view on occasion. Therefore, Cao and Paty used their numerical models to predict favourable locations for reconnection.

The pair say that learning more about Uranus will help with understanding the ever increasing number of exoplanets that astronomers are discovering. "The majority of exoplanets that have been discovered appear to also be ice giants in size," says Cao. "Perhaps what we see on Uranus and Neptune is the norm for planets: very unique magnetospheres and less-aligned magnetic fields. Understanding how these complex magnetospheres shield exoplanets from stellar radiation is of key importance for studying the habitability of these newly discovered worlds."

The study is presented in the Journal of Geophysical Research: Space Physics.