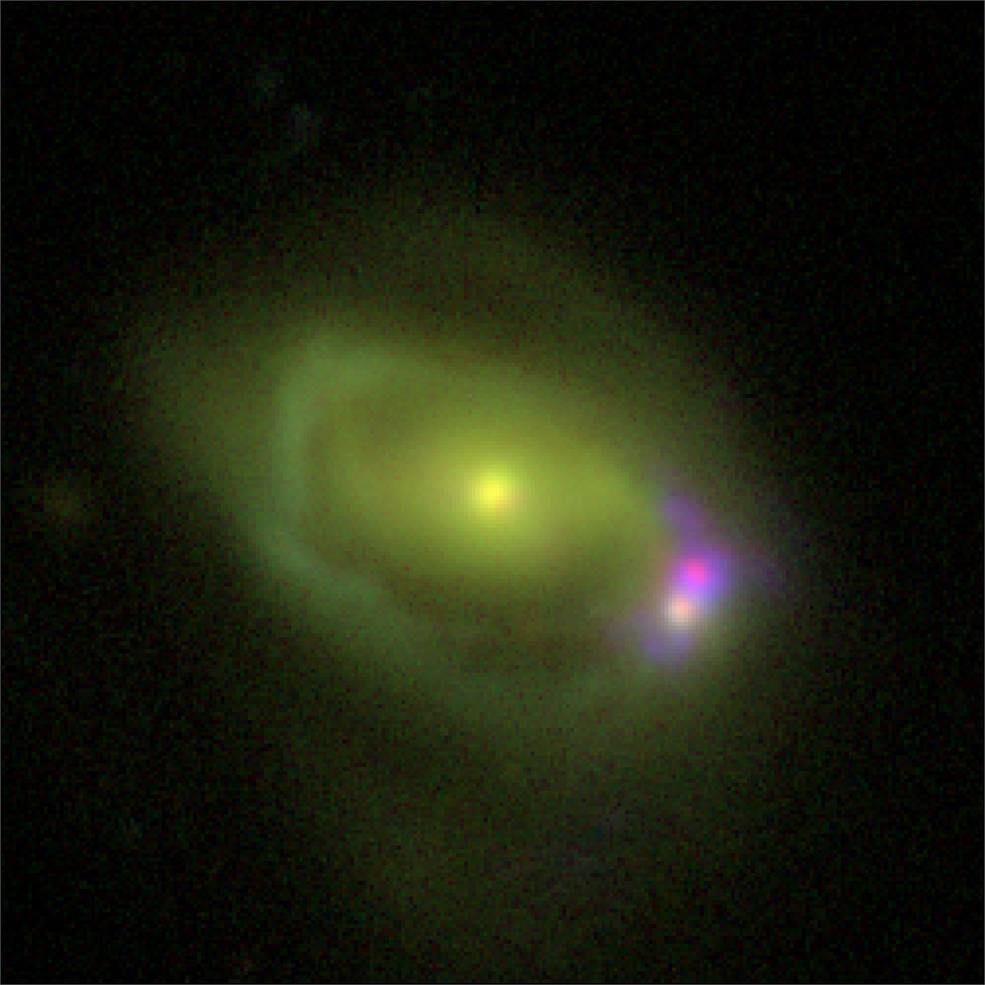 This optical image shows the Was 49 system, which consists of a large disk galaxy, Was 49a, merging with a much smaller "dwarf" galaxy Was 49b.
Credits: DCT/NRL
Full image and caption

A supermassive black hole inside a tiny galaxy is challenging scientists' ideas about what happens when two galaxies become one.

Was 49 is the name of a system consisting of a large disk galaxy, referred to as Was 49a, merging with a much smaller "dwarf" galaxy called Was 49b. The dwarf galaxy rotates within the larger galaxy's disk, about 26,000 light-years from its center. Thanks to NASA's Nuclear Spectroscopic Telescope Array (NuSTAR) mission, scientists have discovered that the dwarf galaxy is so luminous in high-energy X-rays, it must host a supermassive black hole much larger and more powerful than expected.

"This is a completely unique system and runs contrary to what we understand of galaxy mergers," said Nathan Secrest, lead author of the study and postdoctoral fellow at the U.S. Naval Research Laboratory in Washington.

Data from NuSTAR and the Sloan Digital Sky Survey suggest that the mass of the dwarf galaxy's black hole is huge, compared to similarly sized galaxies, at more than 2 percent of the galaxy's own mass.

"We didn't think that dwarf galaxies hosted supermassive black holes this big," Secrest said. "This black hole could be hundreds of times more massive than what we would expect for a galaxy of this size, depending on how the galaxy evolved in relation to other galaxies.”

The dwarf galaxy's black hole is the engine of an active galactic nucleus (AGN), a cosmic phenomenon in which extremely high-energy radiation bursts forth as a black hole devours gas and dust. This particular AGN appears to be covered by a donut-shaped structure made of gas and dust. NASA's Chandra and Swift missions were used to further characterize the X-ray emission.

An optical image of the Was 49 system, compiled using observations from the Discovery Channel Telescope in Happy Jack, Arizona, uses the same color filters as the Sloan Digital Sky Survey. Since Was 49 is so far away, these colors are optimized to separate highly-ionized gas emission, such as the pink-colored region around the feeding supermassive black hole, from normal starlight, shown in green. This allowed astronomers to more accurately determine the size of the dwarf galaxy that hosts the supermassive black hole.

The pink-colored emission stands out in a new image because of the intense ionizing radiation emanating from the powerful AGN. Buried within this region of intense ionization is a faint collection of stars, believed to be part of the galaxy surrounding the enormous black hole. These striking features lie on the outskirts of the much larger spiral galaxy Was 49a, which appears greenish in the image due to the distance to the galaxy and the optical filters used.

Scientists are still trying to figure out why the supermassive black hole of dwarf galaxy Was 49b is so big. It may have already been large before the merger began, or it may have grown during the very early phase of the merger.

In several hundred million years, the black holes of the large and small galaxies will merge into one enormous beast.

NuSTAR is a Small Explorer mission led by Caltech and managed by JPL for NASA's Science Mission Directorate in Washington. NuSTAR was developed in partnership with the Danish Technical University and the Italian Space Agency (ASI). The spacecraft was built by Orbital Sciences Corp., Dulles, Virginia. NuSTAR's mission operations center is at UC Berkeley, and the official data archive is at NASA's High Energy Astrophysics Science Archive Research Center. ASI provides the mission's ground station and a mirror archive. JPL is managed by Caltech for NASA.