NASA Weighs Use of Rover to Image Potential Mars Water Sites
Ever since it was announced that there may be evidence of liquid water on present-day Mars, NASA scientists have wondered how best to further investigate these long, seasonally changing dark streaks in the hope of finding evidence of life – past or present – on the Red Planet.
“It’s not as simple as driving a rover to a potential site and taking a scoop of soil,” said Jim Green, NASA’s director of planetary science. “Not only are these on steep slopes, we need to ensure that planetary protection concerns are met. In other words, how can we search for evidence of life without contaminating the sites with bugs from Earth?”
. 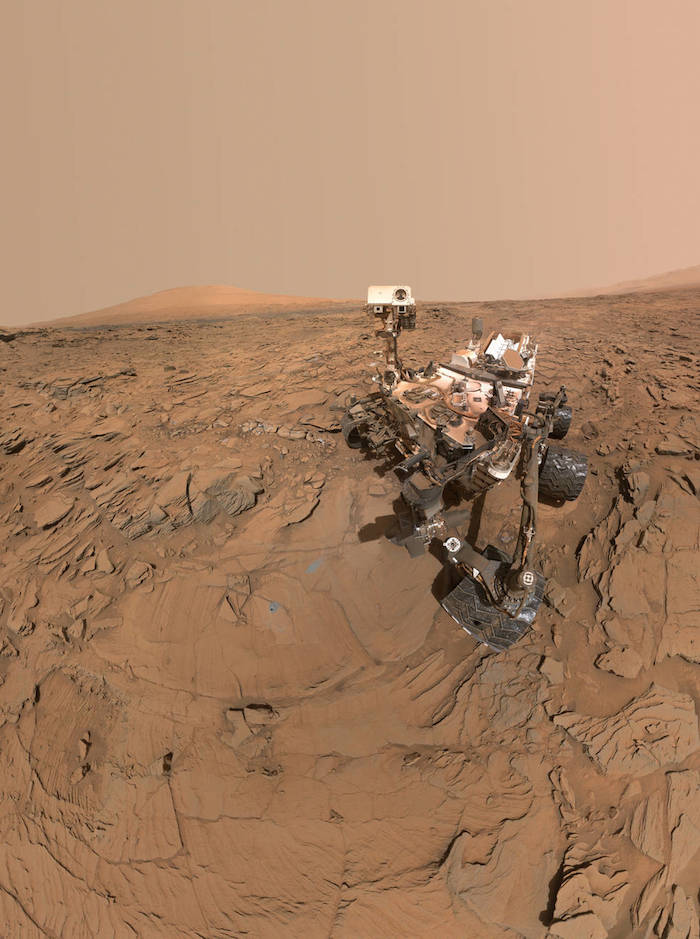 This selfie of NASA's Curiosity Mars rover shows the vehicle at a drilled sample site called "Okoruso," on the "Naukluft Plateau" of lower Mount Sharp. The scene combines several images taken with the rover's Mars Hand Lens Imager (MAHLI) on May 11, 2016, during the 1,338th Martian day, or sol, of the rover's work on the Red Planet.
Credits: NASA/JPL-Caltech/MSSS
-
Pending approval of a mission extension, NASA's Curiosity Mars rover will continue to climb to progressively higher and younger strata on Mount Sharp, investigating how long the ancient, water-rich environments found so far persisted as Mars dried out. Reaching those destinations would bring the rover closer to locations where dark streaks are present on some slopes. On the way, the route would allow the one-ton rover to capture images of the potential water sites from miles away and see if any are the seasonally changing type.
The features of interest have been observed by NASA’s High-Resolution Imaging Science Experiment (HiRISE) camera on the Mars Reconnaissance Orbiter (MRO). They appear as dark lines that appear to ebb and flow over time. Planetary scientists think these gullies or recurring slope lineae (RSLs) may appear seasonally as a form of briny water at or near the surface of the Red Planet under warmer conditions.
There are two RSL candidates that may be within Curiosity’s reach, on the side of the 3.1 mile (5 kilometer) Mount Sharp. The rover’s Remote Micro-Imager (part of ChemCam) would be the main instrument for imaging the possible sites. The goal would be to study the regions over time to see if there are any changes and to rule out other causes for the changes, such as dry avalanches.
How close could the rover safely get to an RSL? “That’s exactly the question that needs to be addressed early in the process,” said Catharine Conley, NASA’s planetary protection officer. “Kilometers away—it’s unlikely that it would be an issue. In terms of coming much closer, we need to understand well in advance the potential for Earth organisms to come off the rover, and that will tell us how far away the rover should stay.”
Conley notes that while the Martian environment is considered harsh for many organisms, that’s not necessarily the case for all of them—particularly microbes that might be hiding within the nooks and crannies of a robotic explorer.
The darkish streaks are considered “special regions” on Mars, where extra precautions must be taken to prevent contamination because of the suspected presence of liquid water, considered a prerequisite for life.
The Mars Science Laboratory (MSL) spacecraft launched from Cape Canaveral, Florida on Nov. 26, 2011, arriving on the Red Planet on Aug. 6. 2012. NASA’s most ambitious Mars mission to date, its goal was to study the Martian environment and determine if Mars is, or was, suitable for life. A decision on the rover’s potential extended mission is expected in the next several months.
Quelle: NASA
Mars-Chroniken
« Zum vorherigen Eintrag Zum nächsten Eintrag »
2485 Views
Created with page4