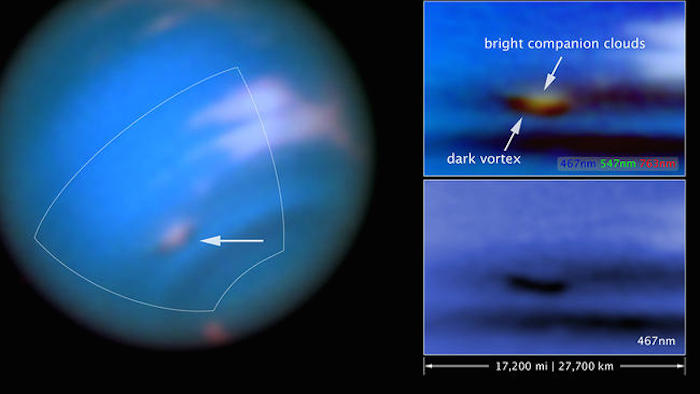 This new Hubble Space Telescope image confirms the presence of a dark vortex in the atmosphere of Neptune. The full visible-light image at left shows that the dark feature resides near and below a patch of bright clouds in the planet's southern hemisphere. The dark spot measures roughly 3,000 miles across. (NASA, ESA, and Z. Levay (STScI))

new dark vortex the width of the U.S. and flapjack-shaped clouds have been spotted on Neptune by NASA’s Hubble Space Telescope.
Since Neptune’s last robotic visit from Earth, NASA’s Voyager 2 spacecraft in 1989 several dark spots have been found. The images captured by Voyager 2 showed a large, dark vortex near the southern pole of the distant planet, but the spot later disappeared. Another appeared in 1994.
The spot found by Hubble on May 16, 2016 is a new dark vortex, according to NASA.
The discovery was announced by University of California at Berkeley astronomer Mike Wong, who led the team that analyzed the Hubble data to find Neptune’s new mark.These blemishes on Neptune are high-pressure systems accompanied by bright clouds, according to the image release. The bright “companion clouds” are created as air is pushed over the dark vortex, causing gases to freeze into methane ice crystals. The shape of the clouds are similar to those seen around high mountains on Earth.
. 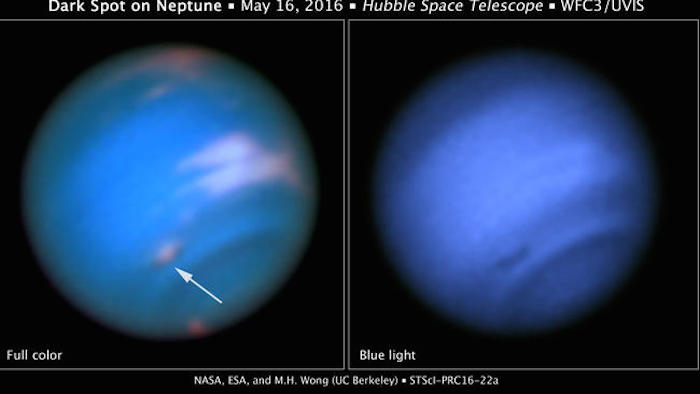 Hubble Space Telescope image showing a dark vortex in the atmosphere of Neptune. The full visible-light image on the left shows the dark feature near a patch of bright clouds in the planet's southern hemisphere. The dark spot measures roughly 3,000 miles across.
The image on the right shows Neptune's dark vortices are typically best seen at blue wavelengths. Only Hubble has the high resolution required for identifying such weather features on distant Neptune. (NASA, ESA, and M.H. Wong and J. Tollefson (UC Berkeley))
-
"Dark vortices coast through the atmosphere like huge, lens-shaped gaseous mountains," Wong said. "And the companion clouds are similar to so-called orographic clouds that appear as pancake-shaped features lingering over mountains on Earth."
Ground-based astronomers have been observing the bright clouds since last July from W. M. Keck Observatory in Hawaii and suspected they might be a result of an unseen dark vortex.
The results from Hubble confirm the Outer Planet Atmospheres Legacy program theory that Neptune’s spots are a sustaining feature. Hubble’s data allowed them to create a higher-quality map of the vortex and its surrounding clouds.
To learn more about Neptune’s spots, scientist will study them over the span of several years, similar to how astronomers study Jupiter’s Great Red Spot and storm systems.
Planetary astronomers hope to better understand where the vortices come from and their influence on Neptune’s atmosphere and environment, according to NASA.
Quelle: Orlando Sentinel
Astronomie
« Zum vorherigen Eintrag Zum nächsten Eintrag »
2111 Views
Created with page4