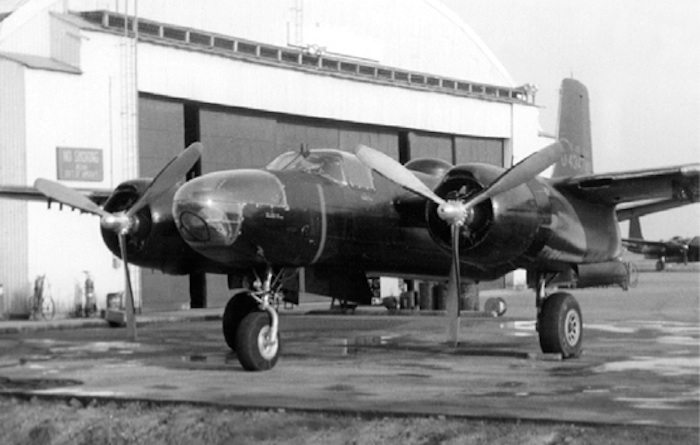 Don Berlinner’s list states the following:
June 2, 1952; Fulda, West Germany. Time unknown. Witness: lst Lt. John Hendry, photo-navigator on an RB-26C reconnaissance bomber. One porcelain-white object flew very fast for an unknown length of time.1
Brad Sparks describes it the same way.2 This is all the proponents state about the case. What does the Blue Book file give us?
The Blue Book file
There is little investigation made by Blue Book on this case. There is just one sheet with an attached map of where the encounter
3 took place. Details about the case give us the following information :
1. The RB-26C was on a photo-Recon mission near Fulda, which was close to the East German border.
2. The RB-26C was at 12,500 feet and flying in a South-southwest direction (200 degrees).
3. The UFO was seen traveling in the opposite direction towards the North-northeast (15 degrees).
4. The UFO was estimated at an altitude of 7000 feet.
5. The UFO was moving at a high rate of speed. It was estimated as the same speed as an F94 making a head on pass.
6. The object was spherical in nature and the color of white porcelain.
7. The object was estimated at a size of 6-8 feet.
8. The plane could not take a picture because it happened so suddenly.
9. There was no vapor trail.
10. Temperature was -5C at the plane’ s altitude
11. Winds were from the West-southwest (240 degrees) at 40 knots.
Speculation based on the report
It seems the only person, who saw the UFO was the Photo-Navigator, who was probably in the nose of the aircraft. The plane’s cruise speed is 250 MPH. Depending on what the plane was practicing, its speed may have been a bit higher.
If the object was at the distance described and the size indicated it would have had an approximate angular size of about 5’ of arc (about 1/6th the size of the moon) at close approach. Such an angular size would be a small object where details would be hard to see.
. 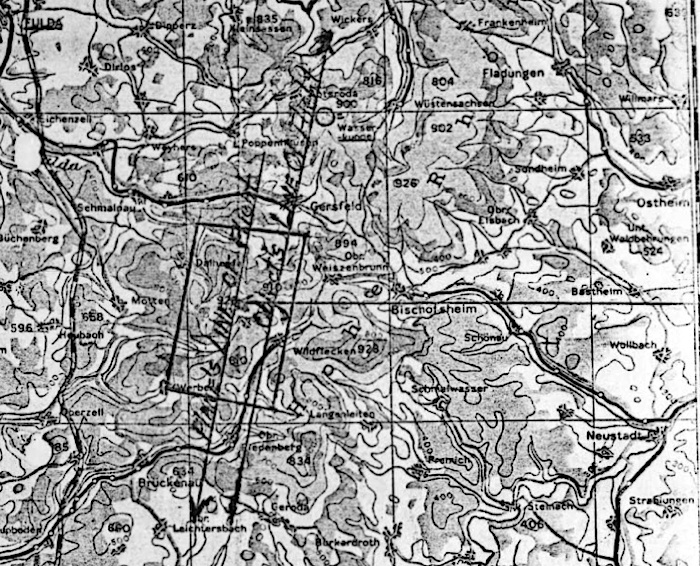 Because the object was moving in the opposite direction of the plane, one has to consider the possibility that the motion of the air- craft was what produced the apparent speed and the UFO was possibly moving at a slower speed or stationary. If this were the case, the possibility that it was a balloon has to be considered. All of the estimates are nothing more than that. The object could have been smaller and closer to the plane. A rapidly moving plane that makes a close pass of a balloon is going to give the impression of an object moving rapidly in the opposite direction.
Solved?
The most probable solution here is that what was seen was a balloon. Its apparent speed was a combination of the aircraft’s motion and the balloon being blown in almost the opposite direction by the wind. Other than a weather balloon, another pos- sible source of this balloon was the “Winds of freedom” campaign.4 This was an effort to drop leaflets behind the iron curtain using large numbers of balloons. Thousands of balloons were released between 1951 and about 1956. Since the plane was near the East German border, it would not be a surprise the balloon was part of that effort. This case should be reclassified as “possible balloon”.
Quelle: SUNlite 3/2016
UFO-Forschung
« Zum vorherigen Eintrag Zum nächsten Eintrag »
2429 Views
Created with page4