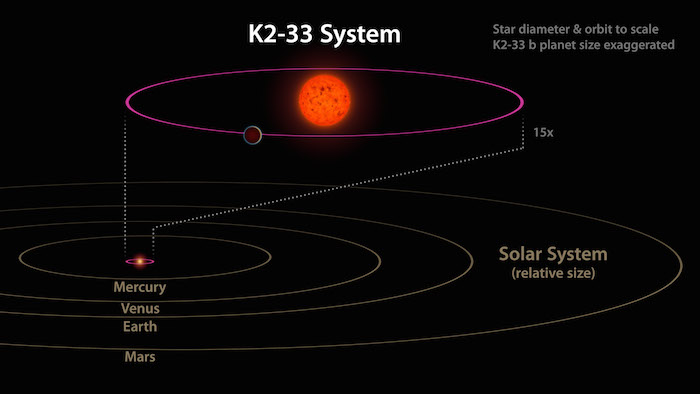 Today astronomers are announcing the discovery of the youngest known planet, only 11 million years old, which transits its star once every 5.4 days. The MEarth-North and MEarth-South arrays (in Arizona and Chile, respectively) played a crucial role in confirming the existence of this infant world first detected by NASA's Kepler K2 mission.
“Young stars tend to be very blotchy, with starspots that can mimic a transiting planet. Our observations ruled out stellar activity and proved that the Kepler signal came from a bona fide planet,” says Elisabeth Newton of the Harvard-Smithsonian Center for Astrophysics (CfA), co-author on a study appearing in the Astronomical Journal.
"We were also able to measure the planet's size and orbit more accurately," she adds.
The K2 mission first identified this planetary candidate earlier this year. However, K2 observations are spaced 30 minutes apart, making it difficult to confirm and characterize the planet. The MEarth arrays conducted follow-up observations to generate a much more accurate light curve. This allowed the team to determine that the new planet is a super-Neptune five times the size of Earth, orbiting its star at a distance of less than five million miles.
An enduring puzzle about exoplanets is their prevalence at orbital distances much closer to their central stars than the planets in our own Solar System. How did they get there? One scenario holds that they were born and bred in the hot inner disk close to the star. Other scenarios propose that the close-in planet population originated in cooler climes, at distances beyond the orbit of the Earth, and migrated inward to where they now reside. Their migration may have been driven by interactions with either the natal disk, with other planets in the same planetary system, or with more distant stars.
These scenarios can be tested observationally by searching for young planets and studying their orbits. If the close-in population formed in place or migrated in through interactions with the natal disk, they reach their final orbital distances early on and will be found close in at young ages. In comparison, migrating a planet inward through interactions with other planets or more distant stars is effective on much longer timescales. If the latter processes dominate, planets will not be found close to their stars when they are young.
The new planet, which transits the star K2-33 in the 11-million-year-old Upper Scorpius stellar association, is one of the few planets known at such a young age and one of the best characterized. The existence of K2-33b demonstrates that some close-in planets achieve their final orbital distances early on. These planets either form close to the star or migrate there through interactions with the natal disk.
Andrew Mann (The University of Texas at Austin), the first author of the study, is intrigued by these results, because how and when close-in planets achieve their orbital radii may affect the outcome of terrestrial planet formation. "If Jupiter or Neptune had migrated inward after the terrestrial planets formed, it seems unlikely that our Solar System would have an Earth, or any of the terrestrial planets at all," he speculated.
K2-33b was first identified using data from NASA's repurposed Kepler mission, K2. To confirm the existence of the planet and to characterize its properties, the team conducted an extensive suite of follow up observations. Explaining the need for these observations, Mann said, "Young stars are trickier to study than the older stars around which most planets are found. They vary intrinsically as a result of stellar activity and they may be surrounded by the debris (dust and rocks) from planet formation. We were able to reject these as explanations for the observed transit signal."
Observations with ARCoIRIS, the new infrared spectrograph on the 4-m Blanco telescope at the Cerro Tololo Inter-American Observatory (CTIO), played a critical role in measuring the size of the planet. "Because the flux decrement measured during a transit constrains the ratio of the planet and stellar radii, a good measurement of the stellar radius is needed to infer the planet's radius. The ARCoIRIS spectrum measures the stellar luminosity and, thereby, the stellar radius," explained National Optical Astronomy Observatory (NOAO) astronomer David James, a co-author on the study.
Additional high-resolution imaging and Doppler spectroscopy confirmed that the transiting object is not a stellar companion or a background eclipsing binary blended with the target. The high-resolution imaging was carried out with NIRC2 on the Keck II telescope, and the Doppler spectroscopy with the Immersion Grating Infrared Spectrometer (IGRINS) on the 2.7-m Harlan J. Smith telescope at McDonald Observatory. Additional transits of the planet were observed with the MEarth arrays at the Whipple Observatory on Mount Hopkins, Arizona and at CTIO.
In parallel with the work by Mann and colleagues, K2-33 was also studied by another research team led by Trevor David (Caltech), whose results are published in Nature. The two groups worked independently and reached similar conclusions.
Quelle: Harvard-Smithsonian Center for Astrophysics
Astronomie
« Zum vorherigen Eintrag Zum nächsten Eintrag »
2608 Views
Created with page4