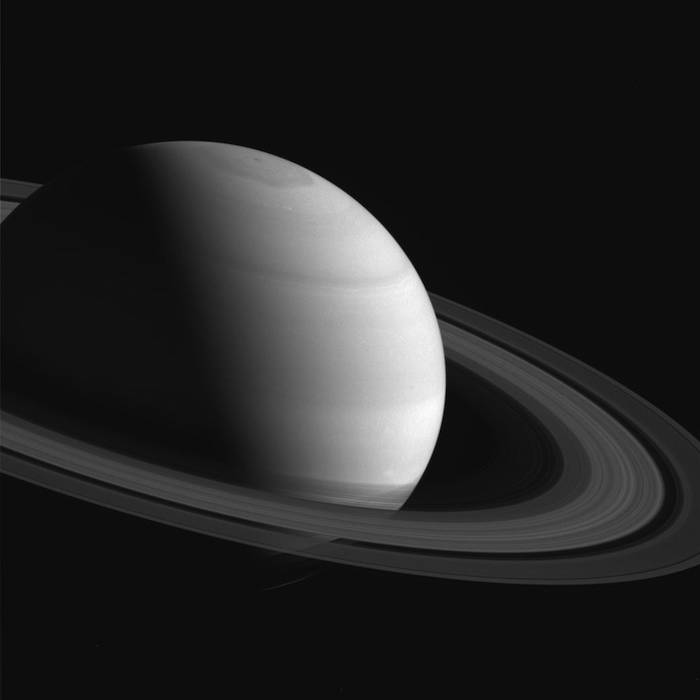 As Saturn's northern hemisphere summer approaches, the shadows of the rings creep ever southward across the planet. Here, the ring shadows appear to obscure almost the entire southern hemisphere, while the planet's north pole and its six-sided jet stream, known as "the hexagon," are fully illuminated by the sun.
When NASA's Cassini spacecraft arrived at Saturn 12 years ago, the shadows of the rings lay far to the north on the planet (see PIA06077). As the mission progressed and seasons turned on the slow-orbiting giant, equinox arrived and the shadows of the rings became a thin line at the equator (see PIA11667).
This view looks toward the sunlit side of the rings from about 16 degrees above the ring plane. The image was taken in red light with the Cassini spacecraft wide-angle camera on March 19, 2016.
The view was obtained at a distance of approximately 1.7 million miles (2.7 million kilometers) from Saturn and at a Sun-Saturn-spacecraft, or phase, angle of 92 degrees. Image scale is 100 miles (160 kilometers) per pixel.
The Cassini mission is a cooperative project of NASA, ESA (the European Space Agency) and the Italian Space Agency. The Jet Propulsion Laboratory, a division of the California Institute of Technology in Pasadena, manages the mission for NASA's Science Mission Directorate, Washington. The Cassini orbiter and its two onboard cameras were designed, developed and assembled at JPL. The imaging operations center is based at the Space Science Institute in Boulder, Colorado.
Quelle: NASA
Astronomie
« Zum vorherigen Eintrag Zum nächsten Eintrag »
2189 Views
Created with page4