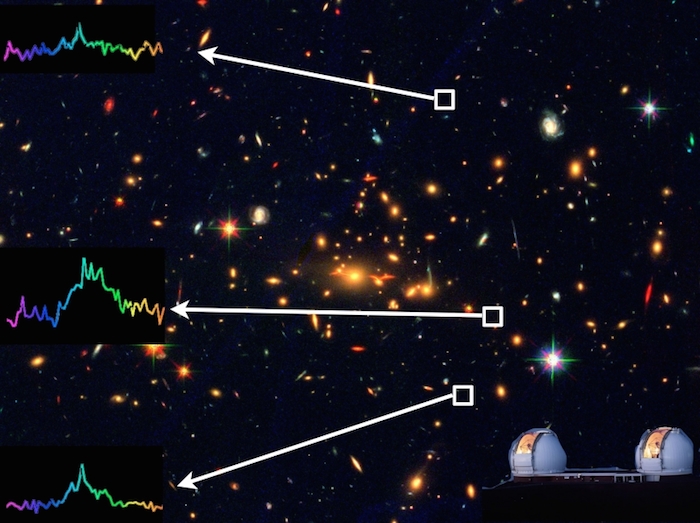 Color image of the cluster taken with Hubble Space Telescope (images in three different filters were combined to make an RGB image). In the inset we show three spectra of the multiply imaged systems. They have peaks at the same wavelength, hence showing that they belong to the same source.

MAUNAKEA, Hawaii – An international team of scientists has detected and confirmed the faintest early-Universe galaxy ever using the W. M. Keck Observatory on the summit on Maunakea, Hawaii. In addition to using the world’s most powerful telescope, the team relied on gravitational lensing to see the incredibly faint object born just after the Big Bang. The results are being published in The Astrophysical Journal Letters today.
The team detected the galaxy as it was 13 billion years ago, or when the Universe was a toddler on a cosmic time scale.
The detection was made using the DEIMOS instrument fitted on the ten-meter Keck II telescope, and was made possible through a phenomenon predicted by Einstein in which an object is magnified by the gravity of another object that is between it and the viewer. In this case, the detected galaxy was behind the galaxy cluster MACS2129.4-0741, which is massive enough to create three different images of the object.
"Keck Observatory's telescopes are simply the best in the world for this work," said Marusa Bradac, a proefssor at University of California, Davis who led the team. "Their power, paired with the gravitational force of a massive cluster of galaxies, allows us to truly see where no human has seen before."
“Because you see three of them and the characteristics are exactly the same, that means it was lensed,” said Marc Kassis, staff astronomer at Keck Observatory who assists the discovery team at night. “The other thing that is particularly interesting is that it is small. The only way they would have seen it is through lensing. This allowed them to identify it as an ordinary galaxy near the edge of the visible Universe.”
“If the light from this galaxy was not magnified by factors of 11, five and two, we would not have been able to see it,” said Kuang-Han Huang, a team member from UC Davis and the lead author of the paper. “It lies near the end of the reionization epoch, during which most of the hydrogen gas between galaxies transitioned from being mostly neutral to being mostly ionized (and lit up the stars for the first time). That shows how gravitational lensing is important for understanding the faint galaxy population that dominates the reionization photon production.”
The galaxy’s magnified images were originally seen separately in both Keck Observatory and Hubble Space Telescope data. The team collected and combined all the Keck Observatory/DEIMOS spectra from all three images, confirming they were the same and that this is a triply-lensed system.
“We now have good constraints on when the reionization process ends – at redshift around 6 or 12.5 billion years ago – but we don’t yet know a lot of details about how it happened,” Huang said. “The galaxy detected in our work is likely a member of the faint galaxy population that drives the reionization process.”
“This galaxy is exciting because the team infers a very low stellar mass, or only one percent of one percent of the Milky Way galaxy,” Kassis said. “It’s a very, very small galaxy and at such a great distance, it’s a clue in answering one of the fundamental questions astronomy is trying to understand: What is causing the hydrogen gas at the very beginning of the Universe to go from neutral to ionized about 13 billion years ago. That’s when stars turned on and matter became more complex.”
The core of the team consisted of Bradac, Huang, Brian Lemaux, and Austin Hoag of UC Davis who are most directly involved with spectroscopic observation and data reduction of galaxies at redshift above seven. Keck Observatory astronomers Luca Rizzi and Carlos Alvarez were instrumental in helping the team collect the DEIMOS data. Tommaso Treu from University of California, Los Angeles and Kasper Schmidt of Leibniz Institute for Astrophysics Potsdam were also part of the team. They lead the effort that obtains and analyzes spectroscopic data from the WFC3/IR grism on Hubble.
The W. M. Keck Observatory operates the largest, most scientifically productive telescopes on Earth. The two, 10-meter optical/infrared telescopes near the summit of Maunakea on the Island of Hawaii feature a suite of advanced instruments including imagers, multi-object spectrographs, high-resolution spectrographs, integral-field spectrographs and world-leading laser guide star adaptive optics systems.
DEIMOS (the DEep Imaging and Multi-Object Spectrograph) boasts the largest field of view (16.7 arcmin by 5 arcmin) of any of the Keck instruments, and the largest number of pixels (64 Mpix). It is used primarily in its multi-object mode, obtaining simultaneous spectra of up to 130 galaxies or stars. Astronomers study fields of distant galaxies with DEIMOS, efficiently probing the most distant corners of the universe with high sensitivity.
Keck Observatory is a private 501(c) 3 non-profit organization and a scientific partnership of the California Institute of Technology, the University of California and NASA.
Quelle: KECK OBSERVATORY
Astronomie
2023 Views
Created with page4