RADIO STORM ON JUPITER: Earlier this week, there was a storm on Jupiter--a radio storm. Amateur radio astronomer Thomas Ashcraft recorded the event on May 17th using a shortwave radio telescope located in New Mexico. Click on the image to hear the whooshing sounds that emerged from his telescope's loudspeaker: 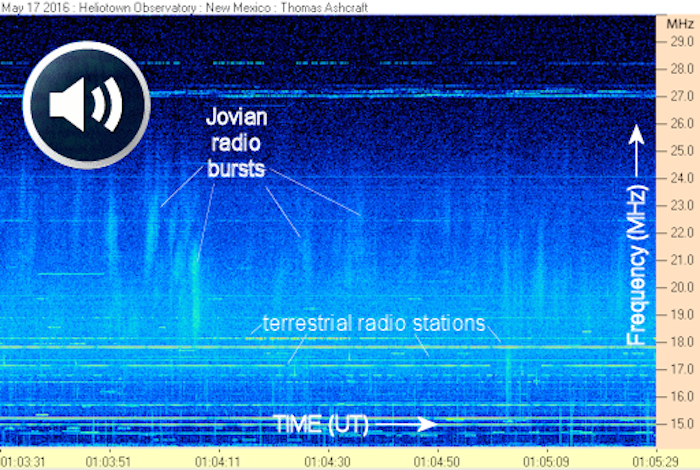 "This was a strong storm," says Ashcraft. "The audio recording captures the sounds I heard during one minute around 01:04 UT."
Jupiter's radio storms are caused by natural radio lasers in the planet's magnetosphere that sweep past Earth as Jupiter rotates. Electrical currents flowing between Jupiter's upper atmosphere and the volcanic moon Io can boost these emissions to power levels easily detected by ham radio antennas on Earth. Jovian "S-bursts" (short bursts) and "L-bursts" (long bursts) mimic the sounds of woodpeckers, whales, and waves crashing on the beach. Here are a few audio samples: S-bursts, S-bursts (slowed down 128:1), L-Bursts
Now is a good time to listen to Jupiter's radio storms. The giant planet is only two months past opposition (closest approach to Earth), and it is high in the sky at sunset. NASA's Radio Jove Project explains how to build your own receiver.
Quelle: Spaceweather
Astronomie
1970 Views
Created with page4