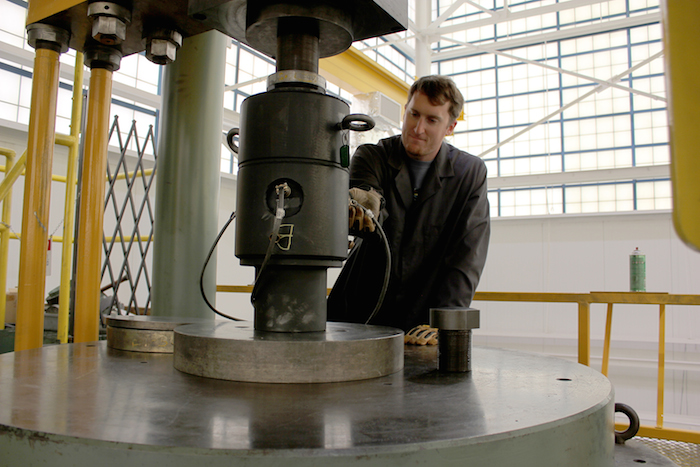 Metrology technician Joey Longino stands on the top of a 25-foot high, 750-thousand pound Gilmore machine to connect power prior to starting the calibration process.
Credits: NASA/MSFC/Ryan Connelly
-
Measurement is the first step that leads to success. If you can’t measure something accurately, you can’t understand and improve it. That is especially true for giant rockets designed to operate under extreme temperatures and pressures at liftoff or space stations the size of a six-bedroom house that must support people living and working in space for years.
Researchers at the Metrology and Calibration Laboratory at NASA’s Marshall Space Flight Center in Huntsville, Alabama, understand the importance of measurement accuracy, especially for the Space Launch System -- the most powerful launch vehicle ever built that will carry humans to deep space and ultimately on a journey to Mars.
“We make sure every instrument that takes measurements during tests for the International Space Station or the Space Launch System or other NASA programs are accurate,” said Gary Kennedy, technical representative for the Marshall Metrology and Calibration program. About 96 percent of Marshall's measurement and test equipment is calibrated through the lab in support of center operations, research and development, manufacturing and testing for NASA projects.
“For hardware to work successfully in space, it has to be tested on Earth, sometimes in harsh environments,” said Kennedy. “That means the success of the hardware in space can be traced back to our laboratory and the accurate data made during a test.”
Equipment that takes quantitative measurements is being used to test critical elements of the SLS and space station. Hardware such as the liquid oxygen tank, liquid hydrogen tank, thermal protection system, and the intertank for SLS are calibrated at the MCL prior to testing, and will be evaluated after testing for comparison. This same calibration process is used to manufacture and test the life support systems on the space station, such as the Environmental Control and Life Support System which provides air and water for the station crew.
Marshall’s laboratory is responsible for ensuring that measurement and test equipment used by its customers are calibrated accurately and have traceable measurements to a national metrological institute. A Consensus Standard, or an Intrinsic Standard makes certain that the type of measurement made at Marshall will be the same measurement made at another NASA center.
The metrology laboratory continually works with Marshall and other NASA customers to develop the most technically advanced measurement concepts and processes to successfully accomplish NASA objectives. Its personnel calibrate all types of measurement and test equipment, from specialized equipment for research and development to common equipment for everyday operations and manufacturing. These capabilities include mechanical, electrical, pressure, force and flow, along with other disciplines in 15 areas to perform more than 1,500 different types of calibration processes. For several of these unique and critical calibration processes, the lab has the only known capability in NASA and in some cases the only capability in the country.
NASA and Department of Defense Services branches conduct calibrations to ensure research and operations work safely and correctly. “Calibrations are only as good as the measurements and data collected,” explained Kirk Foster, manager of the laboratory. “Without proper and accurate measurements, none of NASA’s missions could be successfully accomplished.”
As NASA pushes the limits of space exploration, success depends on reliable and accurate measurements. NASA’s huge missions are built on the foundation of these tiny, precise measurements that inform decisions resulting in bold missions and new scientific discoveries.
Quelle: NASA
Raumfahrt
1859 Views
Created with page4