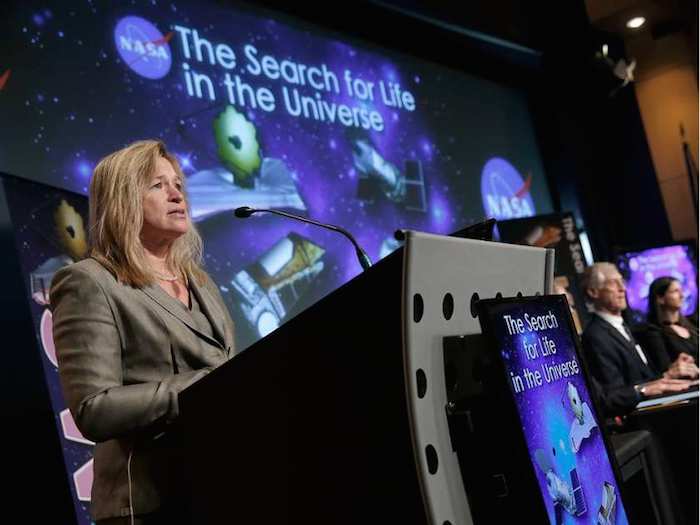 Ellen Stofan, chief scientist at NASA, says life on other planets will teach us more about our own bodies and other Earth life.

Life on other planets is probably waiting for us to find it, and it will teach us more about our own bodies and other Earth life, NASA’s chief scientist says.
“The building blocks of life — amino acids — have been distributed all over the solar system by comets, and there are even amino acids in the interstellar clouds,” Ellen Stofan said.
“We know that life evolved fairly quickly here on Earth once conditions stabilized,” she said. (Earth began as a molten ball; liquid water and our current form of atmosphere developed later as it cooled.)
Alien life might not follow the rules of Earth life, she said. It may not even use DNA or RNA — but we will learn from this.
“We still lack a fundamental understanding of so much. Finding different life is going to (tell) us about life here on Earth in ways that are unpredictable and very exciting.
“We still have huge questions about the origins of life on Earth,” she said. “When you find life that has evolved in conditions different from those we have here on Earth, even so small as a different gravity field, we are going to understand life on Earth much better, because we are going to understand the forcing functions that cause life to evolve.
“I think it was probably easy in our solar system, and probably in our galaxy, for simple forms of life to form.” But she feels “complex life, i.e. us,” is likely more rare.
Stofan and NASA’s chief technologist, David Miller, were in Ottawa on Thursday to talk to Canadian Space Agency officials.
Europa and Enceladus are two places where NASA hopes to find life. These are moons of Jupiter and Saturn with liquid water underneath ice, but they are a long way from Earth.
“Mars is our primary target because we know Mars had liquid water on its surface for maybe a billion years,” Stofan said. “And … if the conditions on Mars were so much like the ones on Earth when life evolved (here), shouldn’t life have evolved” on Mars as well?
It’s mostly dry today on the Red Planet, but there’s water-ice on parts of it. And satellites have spotted streaks that appear and disappear on steep slopes, which might be liquid salt water leaching out of rock and running downhill in warm seasons.
Stofan went out on a limb last year and predicted that within 10 years we will find “indirect” evidence of life in our solar system, such as chemicals produced by living things. And in 20 years, she says, we should find absolute proof such as fossils.
She’s still “fairly optimistic” for this schedule — but first we have to send astronauts to look.
“I have a bias that it’s going to take humans. Not just any humans, but geologists and astrobiologists on the surface, breaking up rocks and looking for evidence of life” in ways a robotic probe can’t do.
Mars is a journey of seven to eight months, one-way. But Stofan says the recent year-long space voyage of American Scott Kelly and cosmonaut Mikhail Kornienko shows that long flights can be done.
Astronauts in zero-gravity lose bone mass, and their hearts, muscles and immune systems weaken.
“The countermeasures that we have been developing for the negative effects of microgravity on humans … are working not just for the six-month astronauts” but also on the longer flights, Stofan said.
Miller said the current estimate is that there’s likely a planet for each of the hundreds of billions of stars in the Milky Way Galaxy, and one billion of those could harbour life.
Quelle: OTTAWA CITIZEN
Astronomie sagt NASA-Experte
1835 Views
Created with page4