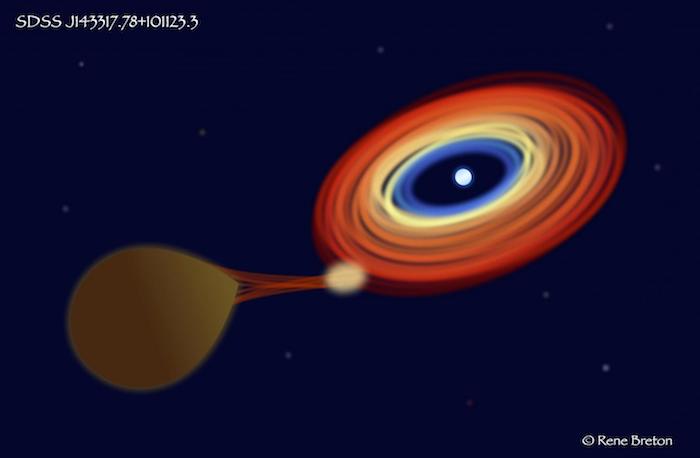 IMAGE: WHITE DWARF (RIGHT) STRIPPING MASS FROM THE BROWN DWARF. view more
CREDIT: RENE BRETON, UNIVERSITY OF MANCHESTER.
Astronomers have detected a sub-stellar object that used to be a star, after being consumed by its white dwarf companion.
An international team of astronomers made the discovery by observing a very faint binary system, J1433 which is located 730 light-years away. The system consists of a low-mass object - about 60 times the mass of Jupiter - in an extremely tight 78-minute orbit around a white dwarf (the remnant of a star like our Sun).
Due to their close proximity, the white dwarf strips mass from its low-mass companion. This process has removed about 90 per cent of the mass of the companion, turning it from a star into a brown dwarf.
Most brown dwarfs are 'failed stars', objects that were born with too little mass to shine brightly by fusing hydrogen in their cores. By contrast, the brown dwarf in this system was born as a full-fledged star, but has been stripped to its current mass by billions of years of stellar cannibalism.
The study, published in the journal Nature, used the X-Shooter instrument at the Very Large Telescope (VLT) in Cerro Paranal, Chile, in order to directly detect and characterise a system that has survived such a traumatic transition.
Lead author Juan Venancio Hernández Santisteban, a PhD student at the University of Southampton, said: "X-Shooter is a unique instrument that can observe astronomical objects simultaneously all the way from the ultraviolet to the infrared. This allowed us to dissect the light of this system and uncover the hidden signal from the faint brown dwarf.
"Our knowledge of binary evolution suggests that, if the companion star can survive the transition, brown dwarfs should be common in this type of system. However, despite several efforts, only a few candidate systems with tentative evidence for brown-dwarf companions had previously been found. Our results now confirm that the successful transformation of a star to a brown dwarf is indeed possible."
The astronomers also used their data to map the surface temperature across the brown dwarf. This turns out to be non-uniform, since this cool sub-stellar object is strongly irradiated by its much hotter white dwarf companion. The map shows a clear temperature difference between the dayside (the side facing the white dwarf) and the nightside. On average, the difference amounts to 57 degrees Celsius, but the hottest and coldest parts of the brown dwarf's surface differ by a full 200 degrees Celsius.
Professor Christian Knigge, from the University of Southampton who initiated and supervised the project, said: "The construction of this surface temperature map is a significant achievement. In many giant planets - the so-called 'hot-Jupiters' - irradiation by the host star completely overwhelms the planet's internal heat flux. By contrast, internal heat flux and external irradiation are comparable for the brown dwarf in our study. This represents an unexplored regime, making such systems valuable as laboratories for irradiated (sub-) stellar and planetary atmospheres."
###
The study involved astronomers from the universities of Keele, Manchester, Oxford, Sheffield, Southampton and Warwick (UK), the Instituto de Astrofísica de Canarias (Spain) and Hamburger Sternwarte (Germany). It was funded by the Royal Astronomical Society, European Union Eleventh Framework Programme, European Research Council, CONACyT (Mexico) and the University of Southampton.
Quelle: AAAS
Astronomie
1920 Views
Created with page4