Pasadena, CA— Carnegie’s Allan Sandage, who died in 2010, was a tremendously influential figure in the field of astronomy. His final paper, published posthumously, focuses on unraveling a surprising historical mystery related to one of his own seminal discoveries.
While preparing a centennial history of the Carnegie Observatories in the early 2000s, Sandage came across an unpublished 1944 exchange between two prominent astronomers that piqued his interest. The conversation seemed to predate by a decade Sandage’s own work on stellar evolution in the mid-1950s.
Naturally, he wanted to investigate further.
So he enlisted Steven Majewski of the University of Virginia, who had been a Carnegie postdoctoral fellow in the 1990s, and Majewski’s then-advisee Rachael Beaton, who is now a postdoctoral research associate at Carnegie herself. For years, right up until Sandage’s death, the three worked on combing through Mount Wilson historical records comparing data from 1935 to modern data concerning a class of stars called subgiants.
“Despite his declining health, we worked incredibly hard in the months preceding Allan’s death—exchanging letters and receiving handwritten comments from him on the manuscript,” Beaton said.
Beaton and Majewski continued the effort even after his passing, receiving his last missive two days afterward. Their work appears in Publications of the Astronomical Society of the Pacific, which specializes in historical technical research.
Let’s rewind.
Subgiants were of particular interest to Sandage because they allowed him make a major breakthrough about stellar evolution in the 1950s.
Sandage’s discovery had to do with the how individual stars within a stellar cluster are distributed when the color versus brightness of the whole cluster is plotted, as is seen in the chart below. This type of diagram was first developed in the early 1900s and consistently yields a distinct pattern. The location of stars in the color-magnitude diagram relative to the so-called “main sequence” allows astronomers to decode the properties of a stellar system.
. 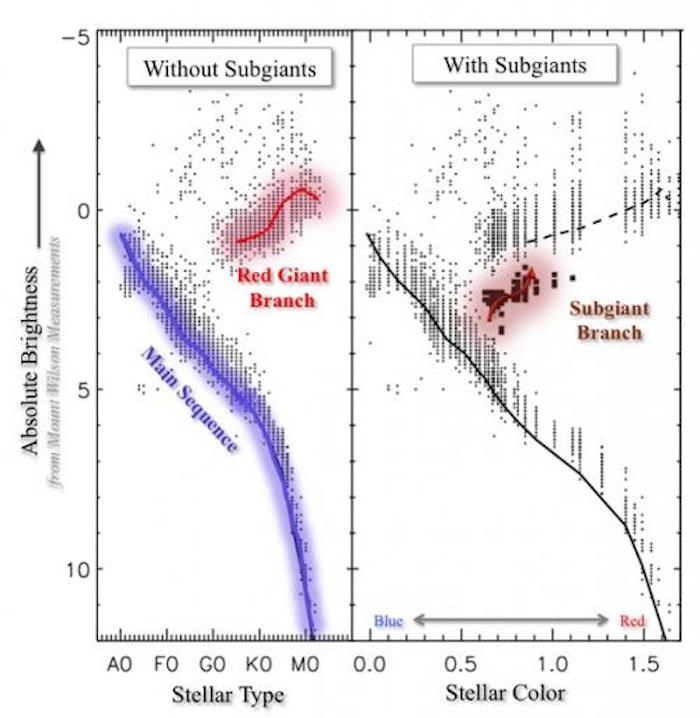 magnitude diagram. Their changes move them away from the main sequence of plotted stars and into different segments of the chart.
Sandage was able to prove that this branching off is actually a consequence of a star’s natural evolution. Scientists already knew how a star cluster would look if plotted on this type of diagram, but not how the different branches of plotted stars related to each other. It was the ability to plot subgiant stars as an intermediary between the long-lived main sequence stars and the much brighter red giant branch that ultimately nudged Sandage and his colleagues to build the foundation for modern stellar evolutionary theory, which became one of the most-important tools astronomers use to understand the universe.
But it turns out that physicist and astronomer George Gamow and astronomer Walter Adams exchanged a letter that included a hand-drawn figure from Gamow that predated Sandage’s illustration of stellar evolution by 10 years.
This letter was influenced by a more-than-20-years-in-the-making catalog of more than 4,000 stellar classifications and distances produced at then-Carnegie’s Mount Wilson Observatory in 1935. (This catalog remained the largest in existence until the 1990s.) It turns out that the catalog identified 90 subgiants, although the classification was effectively ignored by scholarly circles, due to criticisms that the catalog was biased and the fear that any new findings it introduced were likely fictitious.
Sandage, Beaton, and Majewski pored through the records, comparing all 90 of the subgiant measurements from the 30s to modern measurements and finding them very accurate and precise.
“If this very real discovery of subgiants had been recognized at the time, we could have increased the speed at which stellar evolutionary theory was developed,” Beaton explained.
Beaton and Majewski insisted on Sandage being the first author of the paper, as he conceived its original concept and framework, as well as wrote the early drafts of the manuscript.
“The paper’s important historical insights would not have been possible without Allan’s tremendous knowledge, not to mention his direct involvement with many of the events it describes and untangles,” said Observatories Director John Mulchaey.
Caption for above chart: Color-Magnitude diagrams for all bright stars within 1,000 light-years of the Sun as determined by Mt. Wilson astronomers in 1935. (Left) Diagram without the subgiants, in which it is difficult to connect the two clear populations. (Right) Diagram with the subgiants discovered by Walter Adams et al. The subgiants form a connective tissue between the sequences that inspired Allan Sandage and his colleagues to advance the theory of stellar evolution by exploring the physical properties of these stars relative to the other sequences. 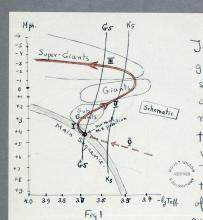 This work was supported by the Jefferson Scholars Foundation’s C. Mark Pirrung Family Graduate Fellowship in Astronomy, the Office of the Vice President of Research at the University of Virginia, and the National Science Foundation
Quelle: Carnegie Science
Astronomie
1876 Views
Created with page4