The Russian space agency has posted an astounding video recorded by cameras fastened aboard a Soyuz rocket that took off from the country’s new Siberian spaceport last month. 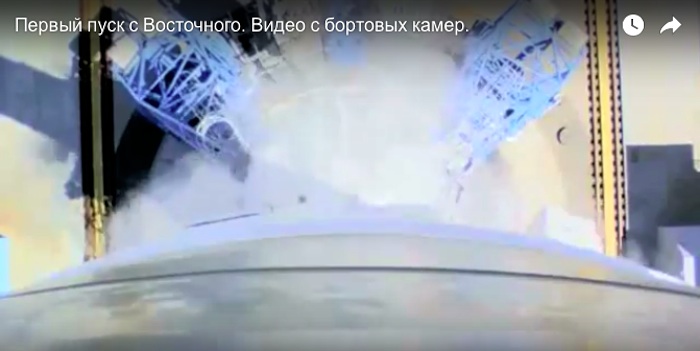 The imagery shows the Soyuz rocket lifting off from the Vostochny Cosmodrome on April 28 and rolling on a course north-northwest from the partially-built spaceport in Russia’s eastern Amur region near the Chinese border.
A downward-facing camera recorded a dramatic view of the forested cosmodrome receding in the distance as the Soyuz quickly raced through the speed of sound and rocketed into the stratosphere. Roads crisscrossing the launch site are punctuated by rocket and satellite preparation facilities and other partially-built structures at the multibillion-dollar cosmodrome.
The Soyuz-2.1a rocket’s four strap-on liquid-fueled boosters jettison in a slow-motion sequence in the video released Monday by Roscosmos, the Russian space agency. The spent kerosene-fueled engines spin away from the launcher’s core, or second stage, at the two-minute point of the flight.
The rocketcam video then skips ahead to show the near-simultaneous ignition of the Soyuz rocket’s third stage RD-0110 engine and separation of the core stage. About seven seconds later, aerodynamic panels that connected the second and third stages fall away from the rocket.
The final scene in the video shows the Soyuz third stage releasing the Volga upper stage and its satellite passengers in space. The Volga later fired its engine twice to inject the three spacecraft into orbit.
The payloads included a multipurpose spacecraft named for Mikhailo Lomonosov, an 18th century Russian scientist and writer, designed to study high-energy cosmic rays and gamma-ray bursts, the most powerful explosions in the universe, which astronomers believe come from the collapse of massive stars at the end of their lives. The satellite will also investigate Earth, attempting to pinpoint the origin of mysterious brilliant flashes of light in the upper atmosphere called transient luminous events.
The Aist 2D satellite launched April 28 will demonstrate a new small spacecraft design with a high-resolution hyperspectral Earth imaging camera. Aist 2D also carries an innovative radar operating in P-band, a wavelength that penetrates through forest canopies and Earth’s surface to study underground structures.
A shoebox-sized CubeSat named SamSat 218 built by students at Samara State Aerospace University also launched on the Soyuz rocket, but it never radioed its ground team after the liftoff and is likely lost.
The rocketcam footage of last month’s Soyuz launch is only the second time external cameras have flown on a Soyuz rocket, and the first time such on-board video has been released by Russia. A Soyuz launch from French Guiana in 2014 carried a suite of European cameras that captured dazzling video.
Frams von Start-Video:
. 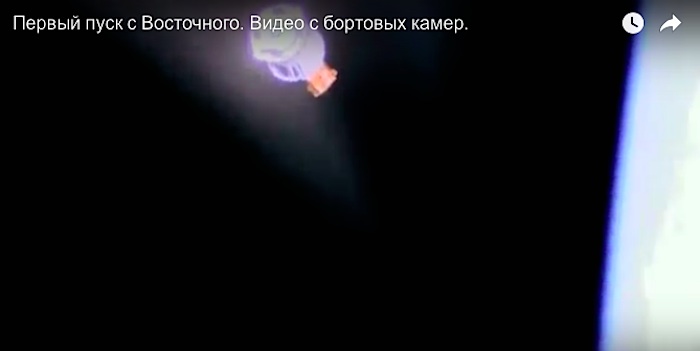