Government vows to tighten rules on drones after Heathrow incident
Labour and pilots have called for action including a possible register and ‘geo-fencing’ following collision with BA plane
. 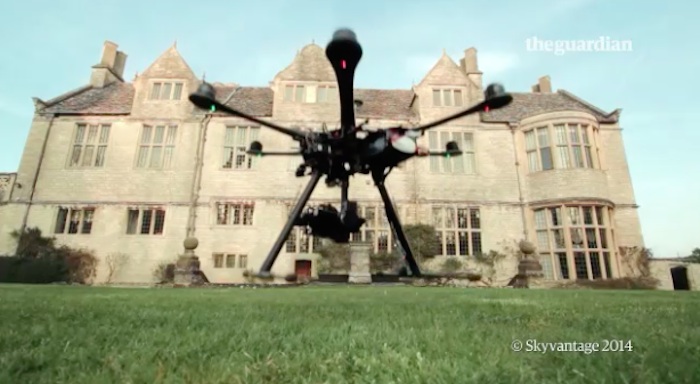 Moves to tighten rules on drones have been promised by the government after the Labour party and pilots’ unions called for urgent action, including a possible register of drone users and “geo-fencing” of airports, after a British Airways plane was struck on its descent into Heathrow.
Sunday’s incident is believed to be the first such collision between a passenger plane and a drone, after a series of near misses that led pilots to warn that a strike could be disastrous. The Air Accidents Investigations Branch said it would launch an inquiry.
The Department for Transport (DfT) said it would hold a public consultation before a strategy is published later this year. Labour has accused ministers of dragging their feet after aviation authorities confirmed a number of potentially serious incidents in 2015, including 23 near misses between aircraft and drones in six months investigated by the UK Airprox Board.
Pilots have demanded tests on the possible effects of a drone being sucked into an engine. Similar tests are conducted on engines for bird strikes, but pilots believe a drone, carrying lithium batteries, could have more serious consequences.
A DfT spokesperson said: “The government is leading efforts with international bodies to develop a stringent regulatory framework focusing on safety and a working group is looking at the issue.”
However, Labour said the working group had been in existence since 2013. The shadow aviation minister, Richard Burden, said: “Yesterday’s drone collision with a plane sadly comes as no surprise and we should be thankful that the pilot was able to land the plane safely. For months we have seen a rising number of near misses and Labour has consistently urged the government to wake up to the problem.
“We know drones pose a very real threat to public safety and we should learn the lessons from places like the US which have been quick to introduce a registration process.”
He added: “We need action but we are still yet to see even a consultation on the options. This now must happen as soon as possible.”
. 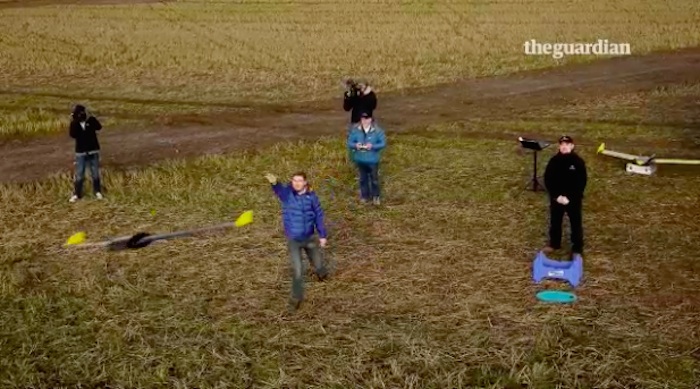 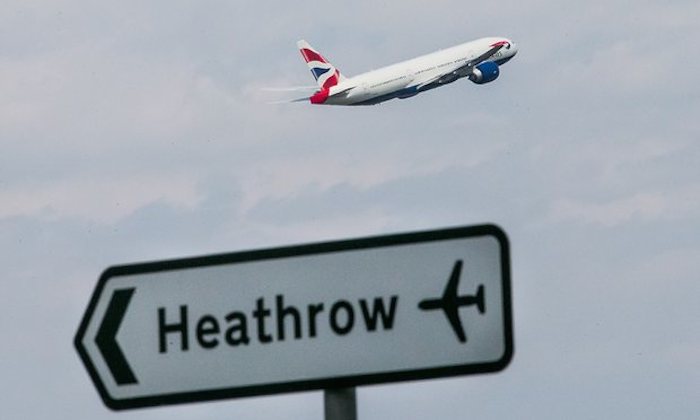 A BA Airbus A320 was struck by a drone at 12.50pm on Sunday as it came in to land at Heathrow. Photograph: Daniel Leal-Olivas/PA
The BA Airbus A320 plane was coming in to Heathrow from Geneva with 132 passengers and five crew on board when it was struck by a drone at 12.50pm on Sunday. BA said the aircraft landed safely and was fully examined by engineers before being cleared to operate its next flight. A spokesperson said: “Safety and security are always our first priority and we will give the police every assistance with their investigation.”
The Metropolitan police were contacted by the pilot and are investigating the incident. However, in most incidents confirmed by the Civil Aviation Authority’s (CAA) Airprox Board, the operator of the drone has not been traced by police, although flying drones in the vicinity of airports is against the law.
Breaching drone rules would generally be summary offences with penalties decided by a court, but a more serious offence of recklessly endangering an aircraft carries a maximum sentence of five years in prison.
A CAA spokesperson said: “Drone users have to understand that when taking to the skies they are potentially flying close to one of the busiest areas of airspace in the world - a complex system that brings together all manner of aircraft including passenger aeroplanes, military jets, helicopters, gliders and light aircraft.”
The pilots union Balpa has been calling for a register of users, after a series of incidents at major airports around the country including Heathrow, Gatwick and Manchester in the last year. Steve Landells, Balpa’s flight safety specialist, said: “Frankly it was only a matter of time before we had a drone strike, given the huge numbers being flown around by amateurs who don’t understand the risks and the rules.”
He added: “Much more education of drone users and enforcement of the rules is needed to ensure our skies remain safe from this threat.”
Other industry experts joined the call for tighter rules. James Stamp, the global head of aviation at KPMG, said: “People who fly drones in controlled airspace are potentially putting lives in danger, and should be subject to the strongest possible sanctions available under the law. A number of practical steps should be taken, including requiring drones to be registered, tougher penalties for irresponsible behaviour, and technology-based solutions that will prevent the drones entering restricted airspace in the first place.”
Earlier this year the Oxford Research Group thinktank highlighted the risk of civilian drones being used by terrorist or criminal groups, and suggested “geo-fencing”, where manufacturers would be required to install the GPS coordinates of no-fly zones in drones to prevent them functioning in those areas.
The rules on drones
The Civil Aviation Authority sets the regulations for the use of drones, or “small unmanned aircraft” weighing 20kg or less. The drone user must:
Ensure its operation does not endanger anyone or anything.
Maintain direct, unaided visual contact with the drone to monitor its flight path (normally keeping it within 500 metres horizontally and 150 metres vertically).
Not allow any article to be dropped from the drone to endanger persons or property.
Not fly a drone above 150 metres or in the vicinity of airports without air traffic control approval.
Not fly it within 150 metres of any congested area, or crowd of people, without CAA permission.
Quelle: theguardian
Luftfahrt
1927 Views
Created with page4